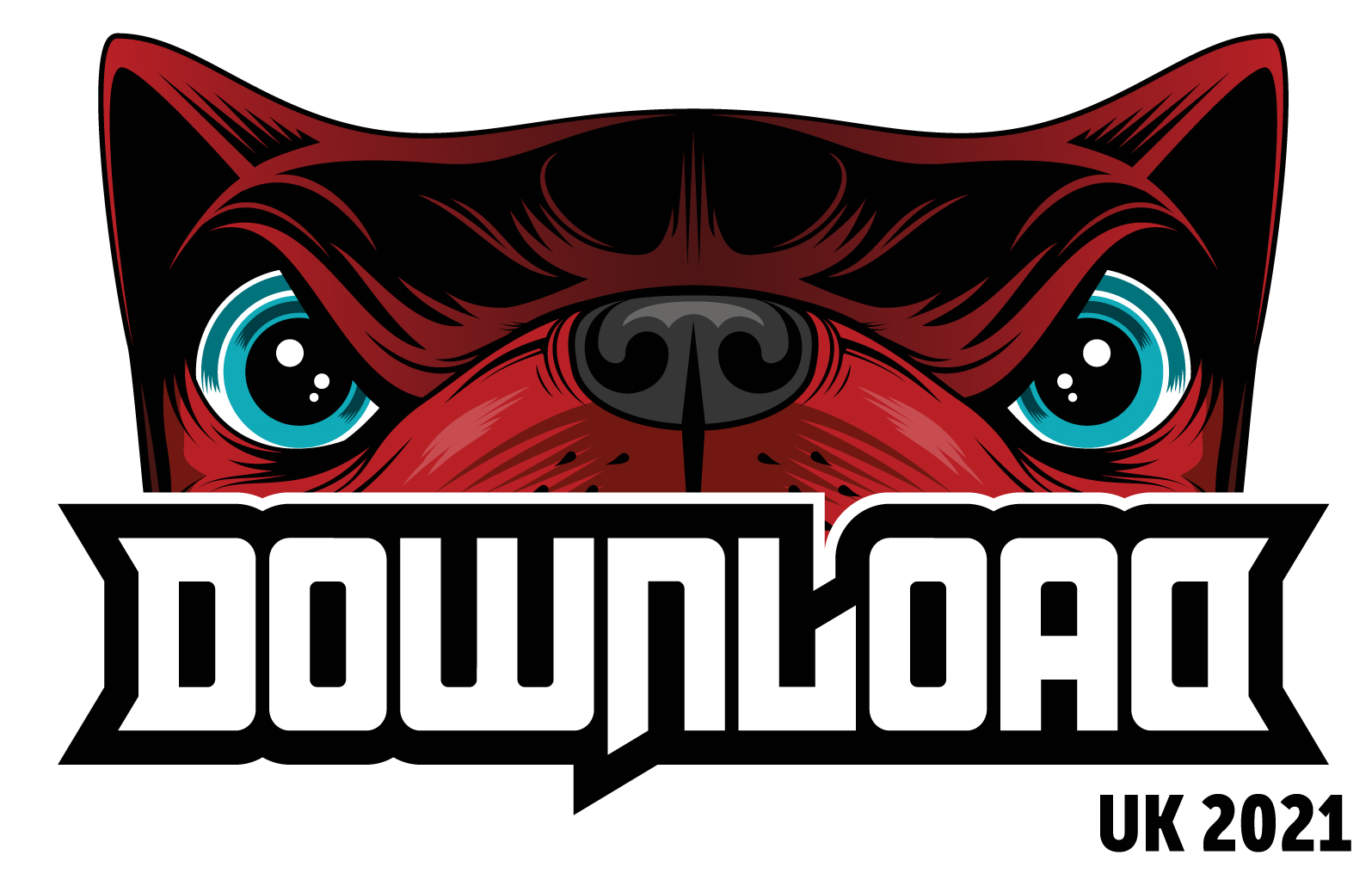 Last week Download Festival dropped a mammoth 70+ band bomb on us for next summer’s massively anticipated return to the hallowed turf of Donington Park.

2020 is a year which has been so God awful it is as if it tumbled from the blackened soul of Lucifer himself, with most of us literally locked inside our own homes for months, the country, scratch that THE WORLD, on its collective knees, and no live music to soothe our pain and misery.

Live music has ground to a halt and the scheduled 2020 Download Festival, like every other summer festival in the world this year, was a casualty of the evil COVID witch.

So although Download 2021 is yet 10-long months away, it is no surprise that excitement is already creeping towards fever pitch at the mere thought of seeing the bands we love thrill us from Download’s quartet of stages, and our ears are ravenous for the glorious and thunderous noise to fill our lugs and make us fall in love all over again with the bands and artists who have wooed our musical souls.

Looking ahead to Friday 4th June 2021 when Download’s head honcho, and rock n’ roll’s favourite stetson-wearing Midlander, Andy Copping unchains the padlock to the hallowed gates of Donington Park – that is when the door will close on this nightmarish year of COVID, lockdown, economic struggle and isolation.

Whatever happens between now and then, it will be when the hordes of our rock n’ roll brothers and sisters charge through the gates onto the promised land, for three days and nights which will further cement the legacy of Download in our hearts, minds and souls.

By the time the gates open thousands of us will already be at one with the site, with most of the campers having spent the night before, or two nights before, setting up their favourite home-from-home, deck chairs facing the sun, swilling from our precious stock of tins as the Download family welcomes us all home.

Download Festival is the Mecca for metal, the paradise of punk, the heaven of happiness and the promised land of rock n’ roll.

Copping, who is the festival booker, has put together a weekend packed with so many star names the festival poster should be listed in neon lights. The Live Nation cheque book has taken a pounding as the world’s premier rock music festival is putting on a blockbuster weekend for our listening, and living pleasure.

After a year in which Live Nation’s revenue took a 98 percent kick in the stones, the Download bill is remarkably stacked. Nobody could have blamed LN for putting on a smaller and cheaper Download after such a difficult time but they haven’t, they are back, with all guns blazing.

The turf at Donington Park is the holy land for rock bands and rock revelers alike. Over the years the great site has hosted Monsters of Rock and latterly Download Festival, which have shaped generations and left deeply ingrained rock horns on the musical hearts and souls of so many.

This time around the first night at Download will be a heady mix of joy, fireworks, some of the biggest and catchiest rock tunes of all time and might even end with a tear or two, as KISS play their final ever UK show.

The Demon, The Starchild, The Catman and The Spaceman will have their passports stamped on UK soil one last time before the American legends hang up their face paint.

Blessed with a staggering back catalogue of mega hits from Crazy Nights; Detroit Rock City and Love Gun; KISS will be an event not to be missed, and they will bring their usual pyro-packed show to the main stage before they bow out from our musical lives.

Sharing the top of the podium as headliners are also Biffy Clyro on Saturday night and System Of A Down on Sunday.

Donington Park sits proudly on the premier site for rock music in the UK, and arguably across the world. The rock stars’ playground and home to the annual Download Festival – the fist-pumping, head-banging phoenix which rose from the ashes of the fondly remembered Monsters of Rock.

There is literally nothing quite like it. Festival season brings out the best in rock fans and Download brings you the best in the planet for your musical pleasure.

In around ten months, we will be alongside an expected 100,000+ like minded rock revelers on the sacred turf for the 2021 edition of the best weekend of the year, and this year is shaping up to be better than ever before. 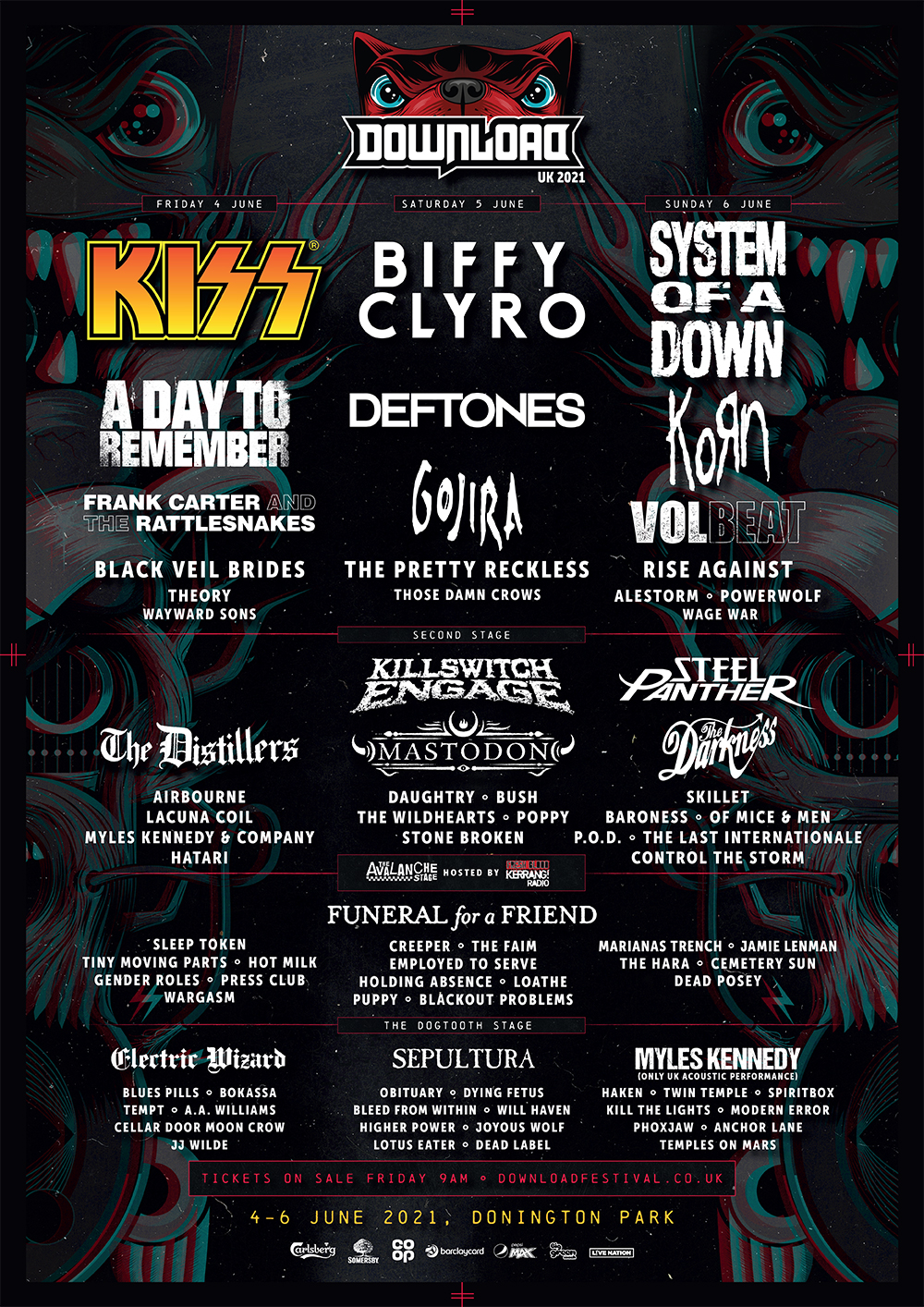 We can picture the scene in our musical hearts as the sun sets and the sky moves from deep sea blue to purple in the East Midlands sky, while the bona fide future headliners Volbeat – surely a shoe-in to make the leap from upper festival slot to headliners in the near future – will bring their unique blend of metal, rockabilly and melodic hooks to the main stage.

On subsequent nights A Day To Remember, Deftones and Korn will take the sub-headline slots, playing in the fading light to an ocean of happy, grinning rock fans – Downloaders scattered throughout the vast expanses of Donington Park.

Standing in a field full of your musical brothers and sisters, shoulder-to-shoulder with your best friend or other half with the sun (hopefully) bearing down on your back, a cold drink in your paw, the other arced skywards in the traditional rock horns shape.

And on the stage, any one of over one hundred bands to tickle all your rock and metal fancies.

As the gates open to the promised land on Friday, we will charge onto the turf like an army of recyclable plastic cup and grin wielding Spartans.

Finding a spot to settle in as the bands plug in and the music … begins.

As the opening bars crank in, a wall of noise rushes forth from the stage like a ravenous beast looking to reclaim its territory.

In the crowd, you begin to stomp your foot, swing your hips, raise your spirits and break into a face splitting smile – Download Festival welcomes us home.

This is a cycle which repeats over three glorious days and for most it passes like a motion-blur, over too quickly, but it leaves its musical bootprints on your soul until the countdown begins for the next visit to Donington Park.

This June the metal masses, the rock rebellion and the festival fun-seekers will descend on the sites around Donington Park for this year’s musical marathon, which pumps up the volume for one gloriously, unforgettable weekend.

Aside the headliners who we mentioned earlier, the likes of The Distillers, The Wildhearts, Killswitch Engage, Sepultura and Airbourne head-up a bill stacked to the rafters with the kind of bands you’d do pretty much anything to see, and the others? Well, they are just new favourite bands waiting to be discovered by you.

But one of the most anticipated bands for us were always going to be the UK’s own Creeper. And by next June we expect they will draw a record breaking crowd to the Avalanche Stage where they are tucked away on Saturday evening.

Barely 48-hours from when we are penning this preview the Southampton band are the toast of the genre as they win their tongue-in-cheek battle with Ronan Keating to secure a Top 5 place in the UK Top 40 Album Charts, with their stunning second album Sex, Death & The Infinite Void.

Yes, the secret about Creeper, one of the flag bearers for the new and soul stirringly exciting generation of rock bands, is well and truly out. Expect a thunderous charge to their set next summer and sorry in advance to whoever is up against them on the other stages, because they don’t really have a chance.

But then the beauty of a festival with four stages and a huge number of bands is there is always something to see, and for every band you haven’t heard of is just a new band for you to fall in love with.

The weather is always something us festival revellers enjoy a moan about or look ahead to with trepidation or hope, but to be honest after the shit storm 2020 dropped on all our lives we couldn’t give a crap about the weather. Nothing Mother Nature flings our way can be anything compared to the mess 2020 dumped onto Planet Earth and all us miniature dwellers.

At the risk of repeating what I said earlier – Download is the best weekend of my year every year. At Bring The Noise UK we’re already counting the days off until we will be nesting down in East Midlands all over again. Time to start stocking up on baby wipes, portable power banks for your phones and preparing to make another head and heart full of unforgettable memories.

After all, the likes of KISS‘ Beth, Strutter, Rock N’ Roll All Night, Deuce are the kind of songs from a legendary band which turned so many of us onto this gloriously muddy path to festivals like these in the first place.

It’s festival season, the gates to paradise are almost open and it’s time to go to the promised land once more.

Horns up and see you and all the metal army next summer – no rain though Mother Nature you moody old boot – we’ve all been through enough!