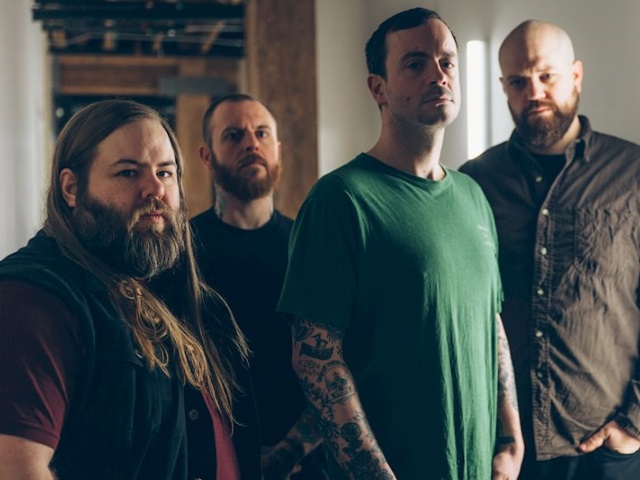 It’s a freezing night in January and already the year seems to be off to a fantastic start. Cancer Bats roll in to Kent tonight with a couple of friends in tow and look to return to the famous Tunbridge Wells Forum (the winner of NME’s 2012 small venue of the year award).

The evening’s entertainment begins with Underside who have travelled all the way from Nepal to be a part of this tour. The band take to the stage accompanied by a mascot of sorts in a costume that resembles Predator and moves around the stage like a metal version of Bez. The music itself is of decent quality, blending metalcore riffs with impressive breakdowns thrown in for good measure. However, they suffer a little with a mixture of an unenthusiastic crowd and a muddy mix that unfortunately muzzles a lot of the power from their overall delivery. A valiant effort, but unfortunately they struggle to put on a memorable performance tonight. 6/10

Bleed From Within suffer no such woes. From the moment they hit their opening notes the Scottish metallers set about causing complete devastation. The band deliver riffs aplenty and the kind of grooves that would make Lamb of God turn their heads and take notice, with the kind of precision that makes metal of this ilk all the more crushing. In stark contrast to the previous act, Bleed From Within whip up a frenzy as vocalist Scott Kennedy stalks the stage like a seasoned pro and has the crowd eating out of the palm of his hand from start to finish, even managing to incite a wall of death during one of the heavier breakdowns of the set. Bleed From Within are a band that have been wrongfully overlooked for years and this set is a testament to that fact. A superb performance that many would have been content with had it been the headliner. 8/10

However, they are not the headliner. Enter Cancer Bats. The boys are now seasoned pros with a career of fifteen years and six full-length studio albums under the belts, and it shows tonight as they plough through their set. They start things off with the tremendous Sleep This Away from their 2010 effort Bears, Mayors, Scraps And Bones and the fans in this tiny venue lap it up. Frontman Liam Cormier bounces around the stage like an excited puppy that has just been let off the lead, as his band mates headbang their way through the track. A surprise addition to the set tonight is the classic track from the band’s debut full length release Birthing The Giant, the track Pneumonia Hawk which incites chaos amongst the onlookers with the pits in constant motion and the temperature rising relentless in the small venue. It is a testament to the body of work that Cancer Bats have created that the momentum never drops for a single moment, as the band throw out tracks from every era of their existence with the likes of Bricks And Mortar being welcomed as enthusiastically as brand new songs such as Winterpeg. However, when the band announce that drummer Mikey is away due to the birth of his second child and that the band have taken this as a chance to “relearn a bunch of old stuff” with their replacement drummer for the tour, we know we are in for a treat and that treat is a rendition of the classic song Butterscotch. Chaos ensues.

The energy in the room doesn’t seem to drop for a millisecond, even when the band run through tracks from their latest album The Spark That Moves which would normally be a bit of a cold shower in the middle of a high velocity set, but the quality of song is so high on this album that it never hits the flow at all. The band then fly into a magnificent version of their Beastie Boys classic Sabotage and threaten to remove the venue from its very foundations with the fans singing back every word, and guitarist Scott Middleton’s wah-soaker guitar parts wail out over the top of the madness.

As the set reaches its crescendo the boys hit the audience with a closing combination of Lucifer’s Rocking Chair, Roadsick and Gatekeeper to make sure that the fans head home with smiles as big as the bang-overs that they will likely be suffering in the morning.

Cancer Bats are a band that always delivers and tonight is no different. A tremendous success and a wonderful welcome to back to a town that they refer to as their “spiritual second home.” 9/10