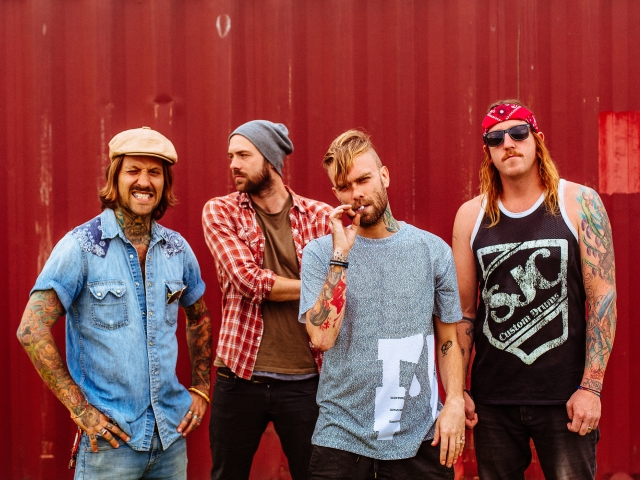 With the line for The Used well and truly snaking around the block hours before doors, it’s safe to say this is a band who have retained a certain level of relevance over the years. Whilst clearly the stars of the show – they managed to get a bunch of ageing twenty-somethings and some excitable sign-wielding teens out on a school night, after all – all great events have a supporting act. With this being great by definition, it was by no means exempt.

London’s very own openers Arcane Roots, although a slightly random choice for the bill as they’re nothing like the headliners, made sure fans were suitably warmed up with their slightly off-kilter but still impressive Brand-New-mixed-with-Biffy-esque sound. With an incredibly unique stage set up (the drums are at the front, and believe us, this throws you more than you’d think), they were able to suitably grasp the attention of the crowd for the duration, which is what you want really! Definitely worth checking them out.

Cue the main event. There’s a trend emerging out of bands who had their heyday in the last decade – they’re starting to recognise, more and more, that the old stuff really did work best. Sure, The Used may have had some decent enough releases of late, and frontman Bert McCracken’s hair may no longer be lank, black and long, but the essence of a band who helped define a generation is still well and truly there – and it’s a welcome reality. If you lament the death of the days where you could PC4PC and you just can’t let go of your MySpace alter ego, this show was most definitely one to take you back, and if you weren’t there, you should have been.

Despite pepperings of some of their newer stuff, The Useds’ Scala set came complete with a more than healthy dose of nostalgia, as they powered through the now-classics such as The Taste of Ink, I Caught Fire and more. They guys may not be as young as they used to be, but in all honesty, they’re looking better for it, and it definitely didn’t stop certain elements of the crowd retaining a more than youthful glow – not to mention a spark which led to everything from circle pits, to crowd surfing and beyond – energy most of us just don’t have anymore! The venue, though small, was alive with the vigour of 1000 dedicated fans.

Encores are indeed inevitable 99.9% of the time, and this was thankfully not the exception. The hauntingly beautiful On My Own came tonight preceded by an honest and frank discussion of addiction from McCracken, who seems to be winning his own long documented battle. After taking things down to something altogether calmer for the penultimate offering, the Utah four-piece wasted no time in building it back up as they ended on the intro to ‘the best song ever written’ – Nirvana’s Smells Like Teen Spirit, apparently – leading straight in to perhaps their most-loved A Box Full Of Sharp Objects from their 2002 debut self-titled.