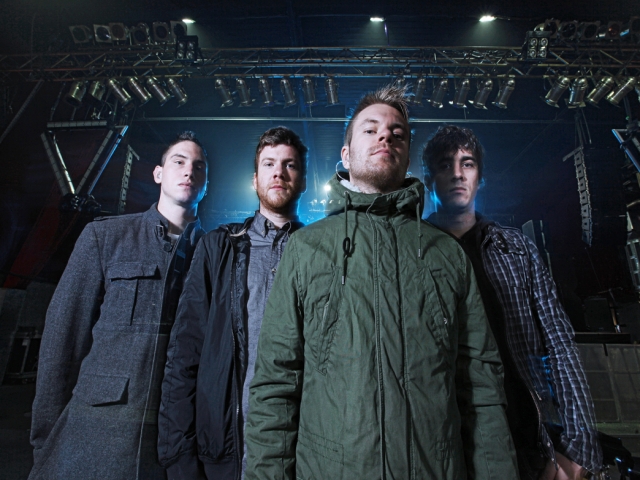 Tonight’s Enter Shikari show at the Hatfield Forum sold out in 30 minutes flat – at least that’s what we’re told by countless excitable fans dressed head-to-toe in their merch (literally) as we prepare to go inside. So, no pressure then guys… the fans are out in droves.

Launching right into the evening, openers ROAM, loaded with their radio friendly pop-punk jams, are undeniably good. In saying they’re of a “decent enough” calibre we don’t seek to undermine their work; however whilst we’ll almost certainly be giving them plenty more credit at a later date here at BTNUK, there are more pressing matters at hand.

Enter Shikari? Enter Baby Godzilla, more like. It was indisputably these four guys from Nottingham who stole the show in terms of the opening acts (hell, maybe in terms of the entire night…). Living up to the mean feat of most DEFINITELY giving us something to write about – all the while tasked with standing out in a scene that is almost impossible to stand out in anymore – this is a band whose rise will be inevitable, and they really ought to be commended. Shaking more than a few crowd members out of their seemingly obligatory phone induced stupor (sadly now synonymous with acts audiences are unfamiliar with) with an energy the likes of which arguably hasn’t seen for years, their frontman could be seen literally crawling the staircases, and climbing the walls, riggings, the lot – the stage just a faraway, distant memory housing the other equally enthused members. Oh, and they’re insanely talented, too, in case you were wondering.

No matter how enticing the supporting acts; remember, this was a Shikari gig, after all. The crowd, in this somewhat intimate pretty-much-hometown show (they’re from nearby St. Albans) were predictably wilder-than-wild even before their headliners stepped out to grace the stage. With chants and screams, the guys were able to launch into their one hour twenty set with a deserved respect throughout. Powering through tracks both new and old (read: classics), the ordinarily political rants of the four-piece were for the most part neglected. Despite this, audience interaction was by no means lacking in form, provided by drummer Rob Rolfe – or should we say, “Safety Simon” – complete with a little backpack, “banter” and some (mostly ignored) safety advice. Mayhem, chaos and bedlam ensued; the sweat inducing affair is juxtaposed by a wildly slick performance.

Their material may be tired to some, but with a new album on the way, and what seems like an unwavering fan base, Enter Shikari are without doubt now one of the staples of the home-grown British scene. As we’ve seen tonight, while they may be paving the way for new stars, their own prowess is not at risk of faltering, so watch out – if this was the level they can pull at University venue, the festival crowds won’t be disappointed.