The best thing about creating your own little micro-genre is that you can take it, reform and restructure it to be whatever you want to without any resistance or comparison to your peers. This is something that Vildhjarta know all too well, with their off kilter and expansive take on the progressive metal sound.

The band have made a name for themselves their use of downtuned guitars, constantly shifting song structures and surgically precise technical delivery. Melding together the best of almost every sub-genre under the metal umbrella, to create a sound that is truly unique to themselves.

We have waited far too long for a new album from Vildhjarta, with their previous effort, the superb extended play Thousands of Evils, released more than eight years ago. It was important for the Swedes to come back with a bang and leave a lasting impact on their awaiting audience. Fortunately, they do not deal in low quality output and their new release, måsstaden under vatten, is a testament to that very fact.

The opener, lavender haze, sets the tone for the rest of the album perfectly. The use of polyrhythms and a savagely heavy guitar tone never give you a second to relax into it. This is pure musical schizophrenia and it never gives you a chance at guessing what is coming back, with constant seismic shifts in the tempo and time signature. The balance between the sombre keys and guitars against the more distorted, bestial moments create a real sense of intrigue for what is yet to come on the release.

The second song, när de du älskar kommer tillbaka från de döda, has a much more sinister feel to it. The creepy, atmospheric keys quickly give way to a sonic assault, with the jolting percussive soundscape laying down the perfect base for the mixture of guttural growls and banshee-like highs of vocalist Vilhem Bladin. The keys and choral arrangement that contrasts the dense, heavy instrumentals really add to the whole track as a package and really helps to hit home the ominous feel of the track.

toxin is probably the most direct track on the album. Its Gojira-influenced atomising heaviness, coupled with its impressive complexity, show that Vildhjarta can strip back the sound to be more direct, without losing any of their unbridled power. The dissonant guitar sections and pulverising drumbeats are piled on to the extreme here, and the song is all the better for it. This is where the people came to mosh, and that is aided and abetted by a devastatingly brutal breakdown in middle section which would happily sit on a brutal death metal album with its slow, bludgeoning hits and deep guttural vocals

In the second half of the album, we are treated to another seriously heavy track detta drömmars sköte en slöja till ormars näste, which is barbaric enough to flay the skin straight from your bones, yet somehow make you want to come back for more. This is where the band often excels. Yes, they are superb at writing grand opuses that make you sit down and want to dissect everything that is going around you, but it is sometimes in the streamlined version of Vildhjarta that you get these absolute gems that make you want to flip the nearest table and headbang until your neck fails you.

As a whole, måsstaden under vatten is a great album. The band know what they are doing at this point and the fact that it took them nearly ten years to release a sophomore album, considering the swell of interest and critical buzz that was around them, is almost criminal. The only complaint you may find, is that there is so much material here that it can be a little hard to listen to in succession. We have two discs worth of new material, that clock in at a pretty bloated fifty-plus minute run time. Now this is going to be welcomed with open arms by their fans and will nourish their hunger for fresh tunes. But for the rest of us, this may be a little hard to digest and potentially would have been better served as two independent releases, rather than one big slab. 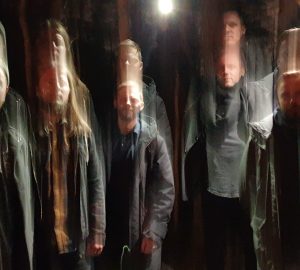