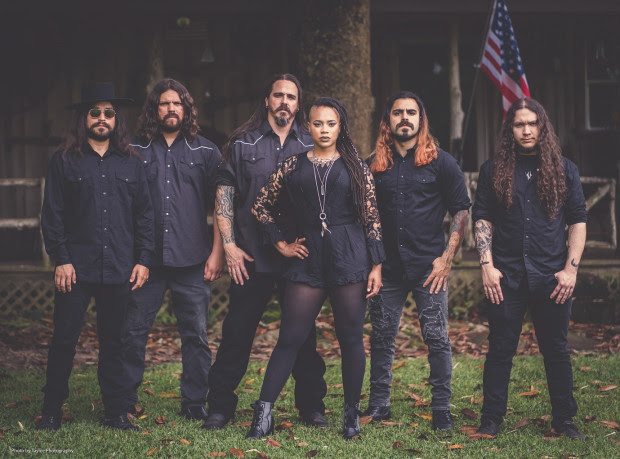 For some bands an overhaul of members can be a death sentence. For others, it can be a rebirth and a new age of creativity. Fortunately for Oceans Of Slumber it has proved to be the latter. Since the release of the critically acclaimed The Banished Heart in 2018 the band lost the entirety of it’s stringed section, leaving longtime band leader and composer Dobber Berverly behind the kit, vocalist Cammie Gilbert and keyboard player Matt V. Aleman searching for new members before any momentum would be lost. Enter guitarists Jessie Santos, Alexander Lucian and bassist Semir Ozerkan to save the day, giving the band a new lease of life and a creative force that is sure to see their new self-titled album take them on the next step forward.

The album opener, The Soundtrack To My Last Day, is a perfect example of the kind of song that Oceans Of Slumber are capable of in 2020. The 7/4 timed off-kilter beats and distorted guitars sound heavy as hell, and the subtle keys add that desired level of atmospherics that Gilbert’s vocals sore over effortlessly. The transitions between every different chapter of the song feel seamless, to the point that you almost forget that the runtime is over seven minutes. From the tranquil, melancholic introduction through the trudging death-doom middle section and then on to the triumphant and melodic final third, this song takes you on a real journey.

The introduction to the following song is an interesting mix of folky acoustic guitars of Santos and Lucian, coupled with the progressive metal drumming from Beverly. They lay down the foundation for Gilbert to add her beautiful vocal melody over and once again the track gradually picks up momentum, before jumping off the edge of the cliff straight into crushing death metal territory once again.

The shifting in dynamics is something that OOS have absolutely nailed throughout this release, showcasing just how much the band have evolved with the addition of an almost entirely new line-up (a creative death sentence for many lesser bands) and how in sync they truly are in 2020. A Return To The Earth Below is a perfect example of this with the dial up in intensity in the music and vocals being noticeable, yet subtle at the same time and not disturbing the flow of the track in any way.

Passing by the frustratingly unnecessary interlude of Imperfect Divinity, the following song The Adorned Fathomless Creation is a great example of just how scathing and uncompromisingly heavy Oceans Of Slumber can be when they put on their death metal hat. The song punches you repeatedly in the face with guttural growled vocals and intricate instrumental work (particularly from Beverly who really steals the show on this one), only being separated by beautifully haunting melodic breaks from Gilbert. This song is a real highlight on an already outstanding album, and will be a spectacle when the band are finally able to return to the stage and can include this in their setlist.

Another highlight is the nearly nine-minute opus I Mourn These Yellowed Leaves, which could very well be the highest peak that the band have reached as songwriters and musicians. The powerful vocals play off against the subtle atmospherics from the keys, all above the Portnoy-sequel drum beats and inventive guitar work, before shifting into a blackened death metal section. The band has a wonderful way of taking awkward, alternate song structures and making them flow in a way that feels natural, and that really shines through on this song.

It’s a bold statement from a band at this stage of their career to release a self titled album. However, Oceans Of Slumber appears to be doing it to show exactly what they are all about with this new line-up and rediscovered fire. There are plenty of releases already this year that have set the world ablaze and this one should be right up there rubbing shoulders with them. We have a candidate here for album of the year and make no mistake about it, Oceans Of Slumber are ready to take their spot at the very top of the progressive metal pile.

Stand Out Tracks: The Adorned Fathomless Creation, I Mourn These Yellowed Leaves 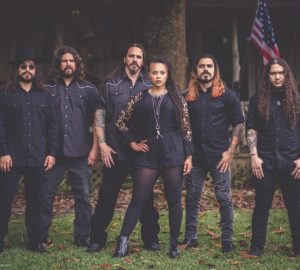