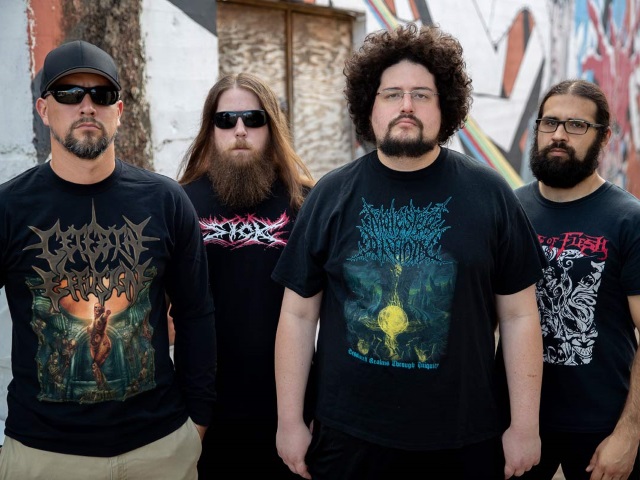 Straight out of the smouldering furnace of the Texas brutal death metal scene comes Architectural Genocide and, as their name suggests, they have come to destroy in every sense of the word. Since their inception only three years ago the band have set about creating a name for themselves with their own brand of punishing, relentless death metal music, with one untitled two-track demo and a bucket load of shows under their belts already. Towards the back end of 2019 Architectural Genocide locked themselves away with the infamous producer Davide “Brutal Dave” Billia (Septycal Gorge, Antropofagus, Putridity) to record their debut full-length Cordyceptic Anthropomorph, and now they are ready to unleash it upon the world.

Opening track Spires Of Mangled Tissue is a clear statement of the band’s intentions which are relatively simple, to decimate all. This is a sonic onslaught of drumming from Nat Conner that sounds almost more machine than man, paired with frantic riffing from Jonathon Blake on guitar and Matt Day on bass to create a soundscape that bludgeons the listener’s ear drums from the very beginning. The vocals from Daniel Brockway are Architectural Genocide’s ace in the hole, with the band using them as another means of audible assault with the emphasis being more on their percussive rhythmic patterns in the absence of any melody. The lower end of the register is clearly where the frontman finds most comfortable, as he delivers guttural growls similar to that of fellow Texan death metal merchants Devourment and seamlessly shifting to a high pitched, shrill banshee scream when required.

Hallucinogenic Demise follows and starts with an ominous, evil sounding guitar introduction. The pace is noticeably slowed down to a crawl, with Conner showing off some different complex fills and rhythmic patterns with his feet. However, in keeping with the nature of the band’s music the relative feeling of comfort doesn’t last long, with the song quickly shifting gears and returning to their more familiar brutal death metal sounds. The fact that the band can switch between the brooding, progressive sound similar to what Cannibal Corpse have embraced in their later years, to an all out barrage of blast beats and chaos with such ease is a testament to the quality of songwriting that they have at their disposal.

Gorge On Deceased opens like a traditional death Mmetal track, one again utilising the percussive vocal lines of Brockway to add another layer to the crushing heaviness. The drums once again drive everything onward, with the impossibly fast George Kolias style double bass pedals and perfectly mixed snare sounding fantastic (Billia has a penchant for making drummers shine on his releases). The guitar tone that Blake has crafted on this release sounds hellacious and cuts through the mix, sounding raw and dangerous without coming across as messy meaning that none of the technical intricacies of the song are lost in the madness.

The album’s closing track, Burgeoning Necrosis, is arguably the highlight of the entire release and shows Blake at his most versatile. The song begins with long, drawn out notes before switching up the pace multiple times, between tremolo picked sections that follow the rhythm of the double bass and chugging sections sprinkled with pinch harmonics and juddering rhythms. Once again Brockway spends a majority in the lower end of his register and spits out his lyrics in a the way you would expect to find on a death metal album from the late eighties.

Architectural Genocide are not a band that are likely to reinvent the wheel. Nor do they try to be. They stick to what they know and that is creating slabs of grotesque, neck-snapping brutal death metal and they are extremely good at it. On Cordyceptic Anthropomorph you will find intricate, impressive musicianship, a vocal performance of the highest quality and production that sounds clean and crisp, without taking any of the rawness away. The only downside is that the band refuse to venture too far away from their blueprint and that can cause for the album to feel a little repetitive. But hey, it’s a bloody good first time effort.

For Fans Of: Aborted, Signs Of The Swarm, Suffocation