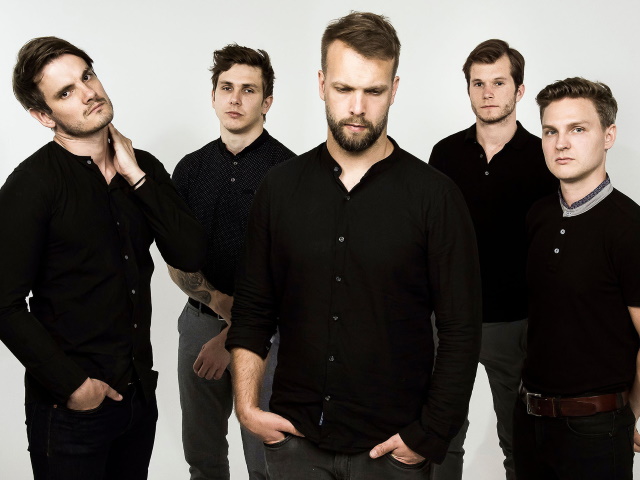 Ever since their first appearance at the Rockstadt Extreme Festival in 2017, Leprous have become a yearly occurrence in terms of concerts in Romania. In 2018 they played the ARTmania Festival, followed up by two headlining shows in Cluj-Napoca and Bucharest; in 2019 they were part of the Bucovina Rock Castle line-up, and now in 2020 they returned with two more headlining shows, a few months ahead of their planned appearance at the /FORM Days Festival, coming this July. Along for the ride are fellow Norwegians in Maraton, and Klone from France.

First to take the stage are Maraton, opening with Altered State, with its jangly guitar riffs and steady yet hectic drums courtesy of drummer Frank Røe. Frontman Fredrik Bergeresen Klemp doesn’t take long before descending from the stage into the crowd, jumping around left and right while continuing to sing the song. They continue with Almost Human, their latest single. Here, Simen Hundere Ruud’s modulated guitars shine through, giving the song an upbeat and cheery sound – their self-described Muse influences definitely come out. Mosai and Change of Skin are next, with Ruben Asknes’s fuzzy bass and Magnus Johansen’s aetherial keys perfectly explaining the “bubblegum prog” moniker found on their Facebook page. It’s cheerful and bubbly in the vocal department, while also jumping around instrumentally. Prime, Seismic and Spectral Friends are their last songs for the night, leaving everyone excited for what is to come during the remainder of the evening. 9/10

After a short break, Klone are up next, taking the stage to the sound of rain and thunder (with white lights to match the effect of a thunderstorm) which precedes the first song of their set: Yonder. Their music is quite aetherial in sound, especially on their last two releases, 2019’s Le Grand Voyage and 2016’s Here Comes the Sun. This is thanks to their clean, reverberating guitars from Guillaume Bernard and Yann Ligner’s soaring vocals. Making their way through their set, playing tracks such as Breach Into the Void and Sealed, second guitarist Aldrick Guadagnino, responsible for the distorted guitar parts, starts having problems with his amplifier. This does not deter the rest of the band, who continue playing their set and entertaining the audience. Drummer Florent Macardet (who also plays with synth-wave act Carpenter Brut) and bassist Jean-Etienne Maillard hold down the steady rhythm section, the latter having quite the lively stage presence, banging his head and kicking his foot in the air. In the end, Guadagnino fixes his amp problems, and the band finishes their set with Silver Gate, Grim Dance, and a cover of Björk’s song Army of Me. 8.5/10

Now it is time for the moment everyone has been waiting for. Following a moderate break to allow for removing excess equipment from the stage, the evening’s headlining band is up: Leprous. They start the set with the keyboard intro of Below, the first single for their latest album, 2019’s Pitfalls, launching into the full song as all six members take the stage, much to the excitement of the audience. “How are you doing, Romania?”, booms singer Einar Solberg in-between songs. “Since the last time I was here [2018], I started talking a little bit between songs, so you’ll get to hear that… a little bit later”, he continues, before starting the next song.

Throughout their set, the Norwegians performed most of the songs off Pitfalls, such as the soothing Observe the Train, the surprisingly ‘poppy’ (in the best way possible) Alleviate and show closer The Sky is Red. They also played a few fan-favourites from their back catalogue: Malina-era singles Stuck and From the Flame, as well as its album opener Bonneville; The Cloak and The Valley for the fans whose favourite record is 2013’s Coal; to top everything off, they sprinkled in The Congregation tracks The Flood and fan-favourite The Price.

The result? A 90-minute-long progressive metal spectacle. From Solberg’s high, soaring vocals and Tor Oddmund Suhrke & Robin Ognedal’s tight and articulate guitar playing, to Simen Børven’s groovy bass lines and Baard Kolstadt’s mind-blowing drumming, it’s clear as day that these guys are masters of their craft. They’ve even brought their cellist since 2017, Raphael Weinroth-Browne, on tour with them, a decision their live shows certainly benefits from, as their older songs almost take on a new sound, while the new tracks such as Bonneville or Distant Bells sound even better live. If you can catch one of their remaining shows of the tour, or you get the opportunity to see them in the future, buy a ticket and go to their concert(s) – you’ll be severely missing out if you don’t. Tusen takk, Leprous! 9.5/10