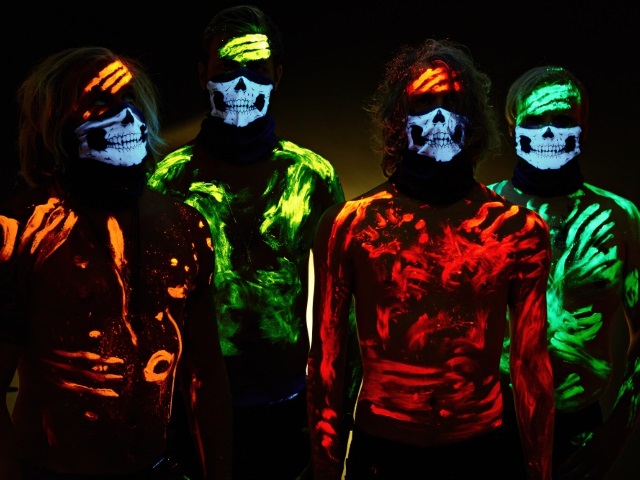 Following the release of their debut self-titled album last year, The New Death Cult will make their first UK appearance later this week as they head out on tour to support Wheel. We caught up with the masked hard rock newcomers ahead of the shows to hear their top tips and stories from the road.

Getting to see a lot of beautiful new faces every night, and getting to interact with different audiences and different people. We also love the kick of getting our chops up as a band and the way touring accelerates the process of growing tighter.

Hauling gear is perhaps the least glamorous part of being in a band.

– Fresh coffee, or at the very least a promise of coffee at the nearest stop

Driving all the way from Oslo to Dinkelsbühl (Germany) in a borrowed Tesla to play the warm up night at the Summer Breeze festival. We spent a total of four days driving both ways, but the show was totally worth it!! What a crowd!

So, going back from that same gig, we had to start driving back home directly afterwards to make it home in time. No shower, which for Alpha means having his earthly face pretty much covered in black makeup, with red neon colour running down his forehead. About one hour into the drive, we stopped near a remote gas station to charge the car, and Alpha, having to take a leak really really bad, had set his sight on a few bushes at the back of the station. He started doing his ol’ thang when all of a sudden a quite angry lady suddenly bursts out of the staff entrance and starts shouting at him in very loud and fast-paced German: “nich getinkelen in das bushes!!”

Alpha apologise dearly, but as you might imagine, it’s hard to just suddenly stop when the space-faucet has been switched on – so he finishes and joins the other three guys inside the station, who meanwhile had been going inside to buy some snacks and also take a leak – legally, that is.

However, the angry woman quickly returns to the counter and continues her yelling at Beta, who upon kindly asking if he could please pay to use the toilet, immediately is knocked down by the fact that “dein kollega getinkeled in das bushes”.

She then spots the previously hooded Alpha inside of the station with black makeup all over his face, a skull mask hanging around the neck, and red neon paint running down his forehead, and starts yelling even louder.

Eventually we had to just give up explaining and trying to negotiate, and left the premises with our tails between our legs – literally – while the angry lady continued her outpouring of disgust against Alpha’s lawless leak fairytale all the way back to the car. Luckily, we were the only ones there!

Well, we’re guessing that kind of goes together with the above?

An early gig where Delta forgot to tape his mask and it fell off mid show. Brains were melted (but slowly!).

That must have been in Hamburg. We had just played a showcase gig on a pub stage the size of a post stamp, and were out and about in Hamburg afterwards, crawling from pub to pub. We all just really went for it. Alpha and Beta went to a karaoke pub and sang Take On Me by A-ha really badly on purpose just to shame our home country…. twice! (No offence, A-ha, we’re actually big fans!)

Next morning we were abruptly woke up and kicked out of our hostel by the cleaning lady (what’s up with TNDC and angry ladies?)

The rewarding moments are forever piling up, but one special moment was definitely our release gig at Parkteatret in Oslo. That was such a special thing for us, and quite the relief after finally releasing our debut album a couple of weeks prior. Also getting featured in The Guardian’s Top 50 new acts to follow in 2020 was a really cool thing for us. Here’s to a lot more special moments in the near future!

See the band on tour with Wheel at one of the following dates: