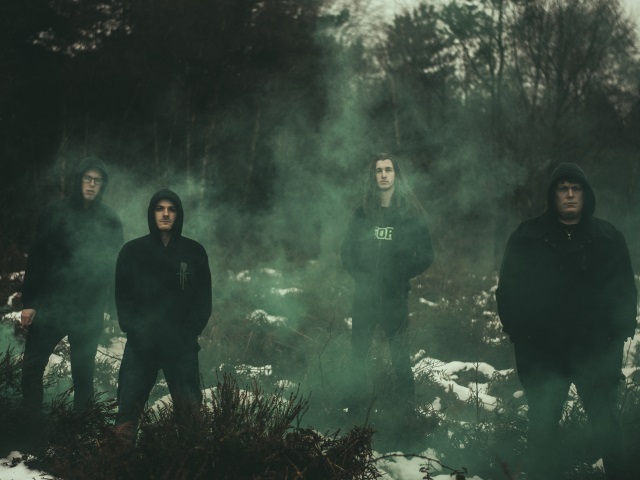 It’s been a whirlwind journey for UK metallers Conjurer, who have been non-stop since the release of their debut album Mire. From countless festival appearances to their debut US tour, awards nominations and endless praise of their first full-length, the band have been going from strength to strength – and this is just the beginning. We recently caught up with bassist Conor Marshall, who was kind enough to sit down with us at 2000trees, to talk about their success so far, their project with label mates Pijn and more.

Hi Connor, nice to meet you.

Nice to meet you too.

How are you getting on today?

Yeah, not too bad. We literally just got here, I got out of the car early, five seconds ago to come and talk to you.

Oh, well thank you very much!

You’ve just come back from the US, your first US tour, how did it go?

Really, really well. Way better than it had any right to, really for us. We were the second band on a four band bill, but in America they always have a stupid amount of locals so it ended up being seven band bills and shit like that. We went over, like “we’ll play to 10 – 20 people a night, you know, a few people might care and buy a shirt, that sort of thing, but it’ll be an experience,” but we went over and so many of the shows ended up selling out, we always had decent crowds, everyone was really receptive to us, sold a load of merch, it was really incredible.

On top of that you’ve got Curse These Metal Hands coming out. We know it sort of came together as a bit of a laugh and a joke…

Yeah, a bit. Last year for ArcTanGent there was meant to be a load of commissioned acts that were collaborations, it was mainly meant to be Holy Roar vs. Big Scary Monsters, that type of thing. So there was meant to be tonnes of them all across the festival but I think by the time it got to it, I assume because if scheduling, nobody actually did it and so it was literally Pijn, who we’d done a European tour with and we’re mates with, so they were like “nobody will do anything with us, do you want to do something?” and we were like “yeah, cool.” So it came from that. It was for ArcTanGent, just as a one-off thing and it went really well, and so Alex from Holy Roar was there and was like “you should record that together.”

And you’re playing together at ArcTanGent, aren’t you?

We’re really looking forward to it coming out having heard it, it’s really good!

How are you finding the reception to Mire? We know it came out a while ago…

Yeah, really good. That’s the thing, obviously at the time it was crazy but we’re more surprised now that it’s still getting a really good reception, like as you said, over a year on. We kind of expected people to completely not care now, but for the hype to be over now until we move onto the next thing. Which we are, slowly getting towards, but yeah, the fact that we’re still getting to play really cool festivals off it…we’ve just announced our own headline tour off it.

Can you talk to us a little bit about anyone you’re looking forward to see this weekend?

This weekend, there’s a few, but the problem is we’re not staying the whole weekend unfortunately. We don’t clash with anyone but everyone is really close together. I’d love to go see Palm Reader but they start on the Neu Stage literally as we finish, so there’s no way we’ll be able to get there by the time we’ve packed all our gear down. Really looking forward to seeing Orchards in a little bit, Press To MECO are doing a Forest Session in a little bit, Nervus, Milk Teeth, we’re friends with those guys so it’ll be nice to see them again. There’s a lot going on, like, it’s a really good line-up.

Where are you off to after here?

After here, we’ve got ArcTanGent. We’re in festival season at the moment, we did Download a couple of weeks ago, which was wicked, this, ArcTanGent; that might be the last official festival we’ve got and then we’re going back to the US in September, which will be wicked, supporting Revocation, then after that, we announced a couple of weeks ago that we’ve got our own headline tour in October. We do a few days in Europe first then a week or so in the UK. Then that is the official end of the Mire cycle. We’re done for the year, taking a break, taking as much of next year off as we need to write album two and then yeah, crack on from there.

Well thanks for rushing to meet us, we really appreciate you taking the time to talk. We’re looking forward to seeing you later.