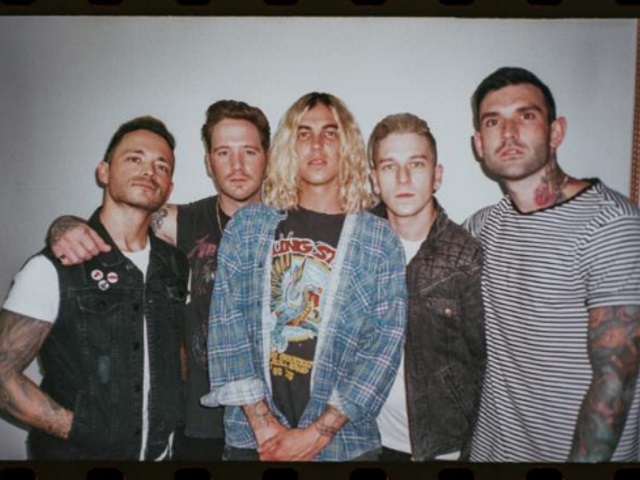 Orlando alternative rock outfit Sleeping With Sirens have returned and are ready to launch into a new mould of music. Making sonic shockwaves on the alternative scene upon releasing debut record With Ears To See And Eyes To Hear it saw listeners introduced to the bands striking sound and salient style. Since then the alt-rock band have been finalising their fifth full-length, follow up to 2017 Gossip, alongside gearing up to hit the global festival circuit and take on a new touring cycle. We caught up with vocalist Kellin Quinn and guitarist Jack Fowler of Sleeping With Sirens to discuss debuting a new track exclusively at All Points East Festival, the tales of touring with Good Charlotte and what’s on the cards for the rest of 2019 for Sleeping With Sirens.

Hello Sleeping With Sirens! Are you excited to be performing at your first ever All Points East Festival?

Kellin: Absolutely! We’re very excited. Its been a while since we played a show so it’s going to be fun.

Any other bands on the line-up whose sets you’d like to catch?

Kellin: For me IDLES. I am a massive fan of that band so I am excited to see them, but they play right before us so I am only going to be able to catch a few of their songs.

Jack: I am definitely excited for Nothing But Thieves, Architects, Scarlxrd and of course Bring Me.

You’re back in the UK for All Points East. However, you were here earlier in the year for a headline mini-tour whilst supporting Good Charlotte. How was playing London’s Alexandra Palace alongside the guys in Good Charlotte?

Kellin: Yeah, it was amazing. I can’t wait to play that just on our own, have a proper headliner there. But it’s a really cool venue, probably one of my favourites over here.

Jack: It’s between Alexandra Palace and Brixton, they are my two favourite venues here for sure.

Around that time one of your albums With Ears To See And Eyes To Hear turned nine. What’s one piece of wisdom that has remained true to Sleeping With Sirens when approaching the creative process of making records?

Kellin: I think the thing I have learned is to just trust your feelings. With that record, we didn’t really know what to expect or have any expectations so I think the most valuable lesson I learned from that was to keep that in the back of your brain, not to think about the outcome or the expectations but to just go in there and write what you feel.

You guys are no strangers to performing at festivals as we’re talking to you ahead of your slots on this year’s Vans Warped Tour and Disrupt Festival. Do you find that you have to adapt your festival setlist to be more all-encompassing of your music, oppose to a tour supporting a specific album?

Jack: I feel like when we do festivals we try to play a lot more of the upbeat, faster more festival jumping around and clapping kind of songs. That’s what people want when you are at a festival, you don’t really want to hear a bunch of ballads you want to hear the fun, fast, upbeat songs.

We’re currently here at All Points East, where you guys will be taking to the north stage. What can the audience anticipate from your set?

Kellin: We’re going to play a new song last. We just figured since we are over here and we have so many opportunities to do stuff like press, to have people be at the show and be able to talk to their friends about getting to hear a new song and rub it in peoples faces, we just feel like this is the best thing to do.

Jack: Honestly, I wouldn’t want to do it anywhere else but here. We love playing here and here feels like our family, so we want to debut the new track in front of the UK first.

Finally, what’s on the cards for Sleeping With Sirens for the rest of 2019?

Kellin: Touring. When we get home we have two weeks off then we start going.

Sleeping With Sirens new album How It Feels To Be Lost is due for release on 6th September via Sumerian Records. The album can be pre-ordered now from here.