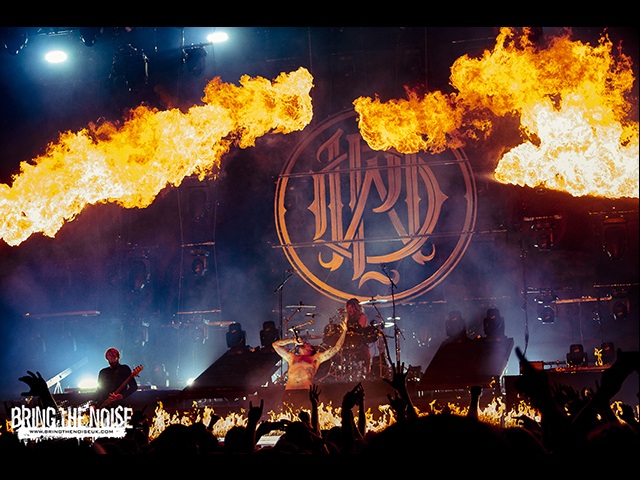 Tonight is a colossal night for the metal community. Australian metalcore titans Parkway Drive have been slaying large venues up and down the country and are now rolling in to old London town to play their biggest ever headline show. Performing at the historic Alexandra Palace in front of over 10,000 adoring fans, the band have brought some pretty heavyweight friends along for the ride in Australian death metal heroes Thy Art Is Murder and the metalcore veterans Killswitch Engage.

It is Thy Art Is Murder who are charged with the monumental task of taking to the stage first, opening tonight’s proceedings. They waste little time in showing the rapidly filling room exactly what they are about, bludgeoning the crowd with an onslaught of blast beats, high speed riffing and frontman CJ McMahon’s raw, powerful vocal delivery. The band know exactly how to work the audience and exactly how to write a set list for such an occasion. CJ stalks over the risers at the front of the stage and delivers a hellacious concoction of banshee screams and stomach-shaking gutturals during set staples such as The Purest Strain Of Hate and Sons Of Misery. When you consider the state of the band a couple of years back when CJ vacated his position and compare it to the amount of enjoyment you see etched across the faces of these five Australian lunatics during set closer Puppet Master, you realise just how fortunate we all are that they decided not to call it quits and rob us of such a beloved band. 8/10

Next on stage are veterans Killswitch Engage. It’s tough to imagine another band that could pick up the baton and run with it after a superb opening act, but then again this is no ordinary band. Killswitch Engage are now in their twentieth year of existence and have seen it all in that amount of time, and like the band that proceeded them tonight they have penned a virtual best-of setlist that is sure to win over a chock-a-block venue. The band throw classic after classic in their hour long set, such as The End Of Heartache, My Curse and Rose Of Sharyn that are all greeted with over ten thousand voices singing back every refrain. Guitarist Adam D and vocalist Jesse Leach work together wonderfully along with the other members to keep the energy high and the crown engaged for the duration of the set, as they plough through My Last Serenade and This Is Absolution which send the audience into an absolute frenzy, with more circle pits than the naked eye can count. They throw in In Due Time at the end of the set for good measure and drop the mic. A classic set from an irreplaceable band. 9/10

The lights go down and fire begins to bellow from the stage, the theatrical music raises the tension in the venue as the crowd look forward. The band then enter through the back of the crowd, guided by hooded figures carrying flaking torches, as they are led through their adoring audience like boxers heading to the ring before a championship bout. The apprehension in the air is palpable as the band take to the stage and stand in front of their fans, before playing the opening notes of the largest show of their career to date, but as soon as Winston McCall begins the spoken word introduction of Wishing Wells it becomes apparant that the band are right at home on a stage of this size.

The band then utilise the momentum that they have gained from the opener and hit the audience with a one/two combination of Prey from Reverence and the classic fan favourite Carrion, that both contain massive hooks that the adoring hordes emphatically sing back towards the stage. The same can be said for the massive hit Vice Grip from the band’s 2015 release Ire, with its catchy lead guitar parts and melodic chorus that was written solely for this very sort of occasion.

The band then reach into their never ending bag of tricks and pull out their classic track Karma from their Deep Blue album, which turns the place into a complete war zone with more pits and bodies flying than you could even count, and a surprising singalong when the lead guitar break comes in, to the delight of guitarist Jeff Ling who looks visibly taken back.

The band then slam the brakes on with Cemetery Bloom, which sees Winston bathe in a spotlight talking to the audience like a pastor taking a sermon in front of his flock. It goes without saying that when the band took this stylistic shift on the last album opinions were divided to include tracks of this nature, but when it comes to a live setting of this magnitude it all makes sense as it adds to the pageantry of the event. If that wasn’t enough, the band are joined on stage by a string quartet to add another layer of theatrics to proceedings, as they play stunning renditions of Writings On The Wall and Shadow Boxing. This band was born for this sort of environment and have reached this stage through nothing but hard graft, raw talent and the undying admiration of their ever-growing fan base, which is no more apparent than when the band run through Wild Eyes with full crowd participation.

The band close the main part of their set with the wonderful The Colour Of Leaving, which sees Winston standing on a makeshift stage at the sound desk half way through the crowd with one stringer musician from the quartet, as he recites the poetry of the song. A haunting, chilling performance of a brilliantly written song.

When the band come back on to the stage for the encore the intensity doesn’t appear to have dropped even remotely, which is astounding when you consider that the fans have already watched one opening act and then an hour long set from the main support, let alone a hefty Parkway Drive set. The band give everything they have left in their arsenal for the last two tracks, with flames a plenty during the massive Crushed and fire, lights and fireworks for the closing track of the night, Bottom Feeder.

Tonight’s headline performance was an absolute triumph and promises to be one of the sets of the year, raising the bar to an almost impossible level for all of the other bands who will grace this hallowed musical venue for the rest of the year to come. The band announced during their set that they have been confirmed as the final headlining act for Bloodstock Open Air Featival 2019, and frankly that is exactly where a band of this magnitude belong. 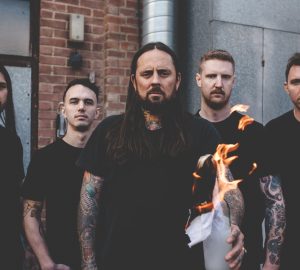