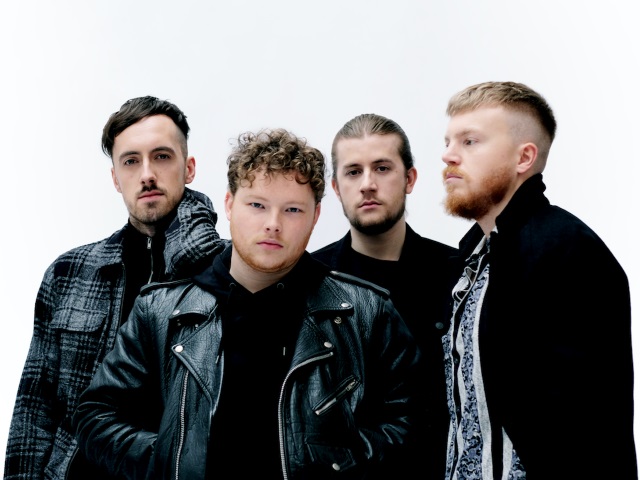 Ahead of their Reading Festival debut we sat down with south coast quartet Wild Front to talk about what makes them feel good, memorable first impressions and their forthcoming debut album.

You’re playing the Festival Republic Stage at Reading Festival later today, how are you feeling about it?

Jack Williams: It’s our first time here as a band, some of us have been before so we’re really looking forward to it.

You formed in Southampton, which has a really great music scene. What do you think about the scene there from a musicians point of view?

JW: We’ve been asked before and it kind of goes up and down I think. Right now it’s really, really good. There’s this new venue called Heartbreakers which is amazing and obviously, Joiners is still there.

Josh Betteridge: The Joiners I think in the last five or so years has really upped its game and made the scene a lot stronger.

JW: Talking Heads is another venue which has just closed down but they’ve really vamped up another one The 1865. That’s cool.

JB: I think there are some really cool grassroots venues for people like us to cut our teeth in to. I think with Joiners and Heartbreakers they’re getting some really good touring bands in.

There’s also The Engine Rooms which is definitely one of the bigger venues in Southampton.

JB: For our headline tour in October we’re playing Engine Rooms with a 450 cap which is really great as it’s like a good step up for us to jump up to.

Are there any Southampton bands or bands, in general, you’re loving at the moment?

JW: Southampton bands, there’s a band called Toreador that are playing with us in October who we love. They’re really really great. Arcade Hearts, a band from Portsmouth they’re really great. General bands, we’re into at the moment.

JB: We’ve got into Soccer Mommy at the moment.

Joe Connell: Me and Josh are really into Phoebe Bridgers at the moment. I’m into more folky kind of stuff I guess.

Your new single Make You Feel comes out soon [the single has since been released], can you tell us a bit more about the track?

JW: We wrote that with a chap called Alfie Jackson who’s in a band called The Holloways. We’re really excited about it as it’s a bit more rocky than the stuff we’ve put out recently. It’ll be interesting to see how it goes down but we really love it. We’re opening with it today!

What makes you feel good?

JW: What makes us feel good?

JB: Jack walking into a pool.

JW: Oh yeah that happened recently. We were at Mad Cool which is in Madrid and we played out there. We were watching the Arctic Monkeys and there was a swimming pool in the artist area and I was so engrossed watching the Arctic Monkeys that I walked straight in. Fully clothed in front of a lot of people. There was a band called Marsicans right in front and I really like them. It’s like ‘that guy fell in the pool’.

Well, at least you’re likely to be remembered for it!

JW: I mean I don’t know if they knew who I was but hopefully if I ever see them again it’ll be a good conversation starter. But yeah lost my phone, a lot of lyrics and a lot of voice notes. It was very sad.

JB: I’m definitely into walking like as in nature walks. That makes me feel good.

You’ve just mentioned Mad Cool which was just one of your festivals played this summer, but what’s been your favourite so far?

JW: It came in last minute so we didn’t really have a lot of time to get super excited about but we opened the British Summer Time mainstage when Paul Simon headlined it. For me that was incredible, I loved it so much. But like I said we kind of got it two days before it was announced and then we didn’t really have time for it to sink in. But that was definitely a highlight.

You’re heading out on tour in October, what can fans expect from it?

JW: We’ve just been sorting out a light show actually.

JB: At our headline shows we’ve started using a projector to project on to the stage. We kind of want to do a lot more with that and the lighting and it be quite an experience visually. Still got lots of ideas we’re working on but yeah we really want to home in on that.

Rumour has it that an album is expected next year, have you made any headway on that so far?

JW: We have but it changes quite a lot as we’re writing still but we have a few tracks which are definitely going on but we kind of like the flexibility of being able to write something and then decide.

JB: The last two singles and Make You Feel are all going to be on the album and the idea is to kind of drip feed songs from the album over the next six months. Then maybe like four or five will be out and we’ll drop the rest of the album. It’s like everything we’re bringing out now will be from the album and we’re just in the process of finishing the rest of the tracks, getting them recorded and stuff. It’s all in progress basically.

What would be your festival anthem since we’re at Reading Festival?

JW: Perth by Bon Iver, it’s a bit of an anthem for me.

JB: Back in Black.

JW: How good would that be?

JB: We’re playing a festival tonight and there’s an AC/DC tribute on after us and we’re like well excited for that.

JW: Touring. Hopefully, after the album comes out in May we’ll be looking to get more music out I think. We’re always writing so there’s nothing else to do but release it. Hopefully just gig a lot.

Wild Front are heading out on tour in October, catch them at the following shows…