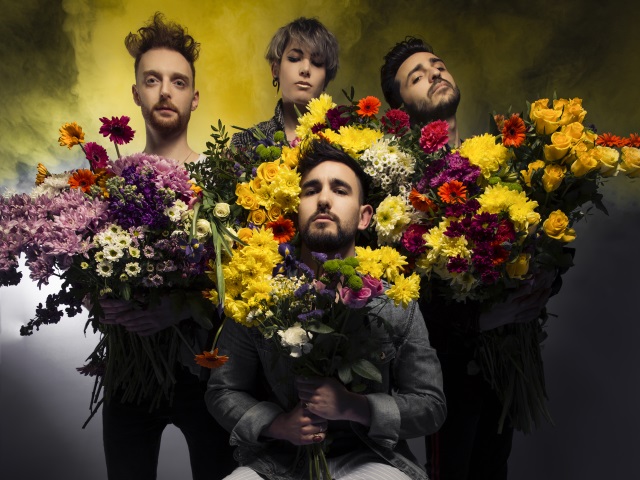 The new decade is off to a flying start for London-based heavy pop quartet Electric Enemy. After launching with their debut single Climb from the Isle Of Wight Festival main stage in 2019, their recently released second single Save Me comes ahead of their shows supporting Bang Bang Romeo. Written in a matter of minutes, we sat down with lead vocalist/guitarist Jim to find out more about Save Me and its coinciding video, of which you can get an exclusive first look on Bring The Noise UK!

It’s an anthem for those who feel powerless in a world that seems to be getting worse and worse due to the actions of those in power. It stands out because it’s cathartic to perform and great to see the reactions of an audience…and it’s hella good obvs…

When writing, some songs take months, weeks, or in this case, minutes; I find that if I commit to one approach of writing then I block out other options, so being free and breezy is the key.

I sat down after being inundated by awful headlines about poverty, war, climate change, etc and just had a rant basically.

When I first played this song to a friend, he said that the budget should be £100,000 and it should end with the band parting the seas like Moses…I won’t spoil the video but that isn’t exactly how it panned out! We’re super proud of the outcome as it’s a tasteful, but still fiercely powerful representation of something very close to us. The director Jordan is a real visionary and one that we love to work with.

Only that it was all hands on deck and that everyone was focused beyond belief. Oh and that one of our managers Guy practically lassoed a support beam fifteen feet in the air with a lighting rig while holding on with one arm…and I’m pretty sure Orlando ate some of my falaffel wrap, but ‘habeas corpus’ and all that…

Only that if you are feeling powerless in this literally insane world, we know how you feel, our songs are aimed at dealing with it, and if you’re looking for a good (musical) time, come and see us live on tour with Bang Bang Romeo in April! Also add our songs to your playlists on Spotify, they are medically (not) proven to make you feel at least 118% better.

See Electric Enemy live at one of the following dates: