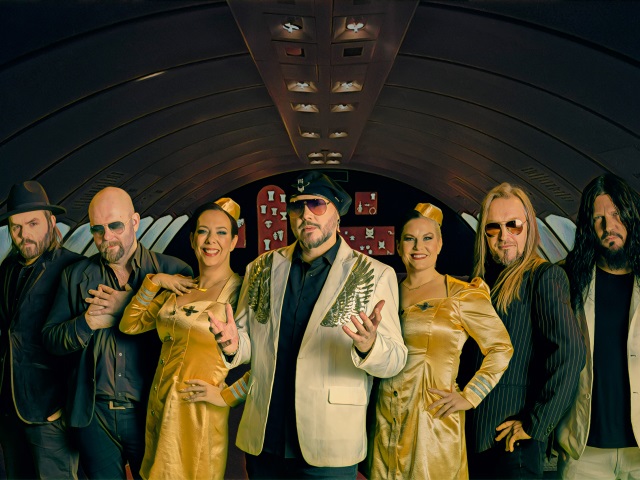 What happens when members of Soilwork and Arch Enemy join forces, wishing to explore the extravagance of the ‘70s and ‘80s? Well, The Night Flight Orchestra is born, that’s what happens. Themed around airline travel, the glam/funk rock/AOR outfit returns in 2020 with their fifth record to date, Aeromantic.

Servants of the Air is the album opener, and after some radio static and Swedish chatter, we are launched headfirst into the song proper, with a synthesiser, guitar and drum build-up to top everything off. Filled with energy, especially thanks to Jonas Källsbäck’s double bass drumming throughout the song, Servants of the Air perfectly opens the record, before fading into the next track: Divinyls. The first single for this release, it is by far and away the catchiest song on offer – possibly even the catchiest of their whole career so far! During this earworm of a track, one can also hear the backup singers Anna-Mia Bonde and Anna Brygård, also known as The Airline Annas. While lead singer Björn “Speed” Strid (also of Soilwork) certainly doesn’t need backup singers, the fact that they’ve got two of them in their line-up only helps drive the ‘70s/’80s feeling of the songs even further.

If Tonight Is Our Only Chance is next featuring an incredibly melodic synth line (with all of the synth and keyboards work on this album done by guest musician John Lönnmyr), a soaring chorus, while also having a groovy, clearly audible bassline courtesy of Sharlee D’Angelo, also of Arch Enemy. The wonderfully upbeat This Boy’s Last Summer follows up, with a surprisingly ABBA-inspired opening and, even more surprisingly, some bongos/congas from guitarist and percussionist Sebastian Forslund – it’s unexpected, but it’s subtle, so it really works. Curves, on the other hand, has some of the most David Gilmour/Mark Knopfler-inspired lead work in recent memory – kudos to David Andersson and Forslund for that one.

Up next: Transmissions. Aeromantic’s second single, this song is also one of the catchiest of the album. Its chorus bears some similarities to Soilwork’s Stålfågel, but then again Strid sings in both bands, so it was bound to happen at one point. Add Rachel Hall’s violin playing to an already-great song and you’ve got a certified hit – Hall’s playing style is surprisingly reminiscent of Lindsey Stirling, but it fits The Night Flight Orchestra’s song really well.

From here on out, things start to get a little more rock-y in sound. With its keys and guitar duet in the intro, the title track, Aeromantic, sounds like it could be the theme song for a TV show centered around an airliner, but again, it really works. Golden Swansdown’s opening and verses remind one of Muse track Madness due to the constant “wub-wub” of the synth, so it ends up sounding like an up-tempo rock ballad. Taurus gets the heads bobbing again, being one of the most rocking songs on offer, but it ends up acting as an almost three-minute intro to Carmencita Seven (which is already six minutes long). After a shreddy guitar solo and an atmospheric piano, classical guitar and sitar outro, Sister Mercurial is next, a synth-driven foot-stomper of a track. Dead of Winter continues that sound with its steady rhythms, stellar chorus, and Strid’s soaring vocals, and City Lights and Moonbeams ends the album on a high note, sending the listener back to the present after spending this hour in the ‘70s/’80s with The Night Flight Orchestra.

All in all, whatever is thrown the listener’s way, this album can be summed up in three words: “it all works”! While some tracks may or may not appeal to everyone based on their preferences, there is no denying that Aeromantic is a great, well-produced and enjoyable effort.

Standout Tracks: Divinyls, Transmissions, Dead of Winter, If Tonight Is Our Only Chance, This Boy’s Last Summer