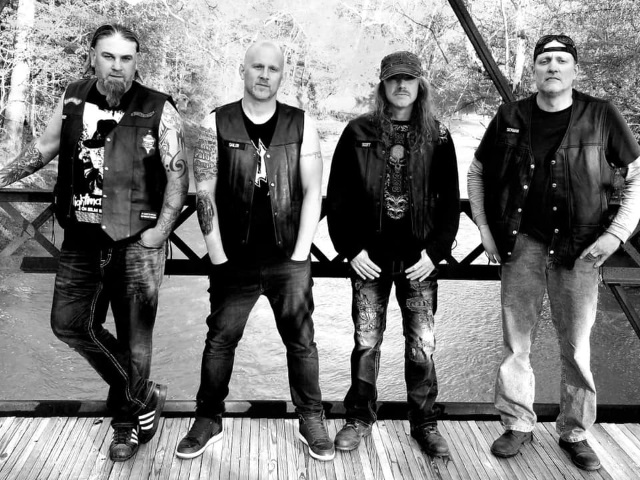 Bust out the old Trans Am and hit the road, because SxWxP have got some jams for you!

Based in Kentucky and formed from the ashes of My Own Victim and Surviving Thalia, these guys like to keep a good groove going, a fact evidenced by their debut release, Trans Am Jams.

Opening with the eponymous intro track Trans Am Jams, featuring the sound of a car engine starting up and going into throttle, straight into Rising Tides, one thing is immediately clear: this seven-song LP will make you at least bob your head along to the music, if not headbang altogether. Rising Tide is the first time you hear lead singer David “Sailor” Bryant‘s vocals. His screams take no time to get all up in your face, as well as his usual, raspy singing, which is a little reminiscent of Zakk Wylde‘s vocal style. Closing Time is next, with a flanged intro guitar riff, backed by Dave Redlin‘s steady and powerful drumming. Scot Smith shines with his solos and guitar work, which are clearly influenced by Zakk Wylde‘s style of playing. This isn’t a bad thing, though, as it is very fitting for the sound they are aiming for. When you add the catchy chorus to the equation, you’ve got yourself a strong standout track.

Next is I Tried, featuring a short spoken passage after the intro riff and first chorus.

Cup of Sorrows opens with a wah guitar intro, which would not sound misplaced on a Black Label Society album, and warns that no-one “knows what the future holds” and that they can be “losing it all” at any given time.

Finally, From Day One seeks to close the album on a high note and leave you with a good feeling, and that it does, making use of a wah guitar intro to grip you in for one last jam.

Production-wise, SxWxP clearly knew what they were aiming for, thanks to their prior recording experience. Every instrument in part can be heard clearly, even Freddy “The Hitman” Griesbaum‘s steady bass-lines. Bryant‘s vocals tend to be a little quiet at times compared to the instruments, but still have no problem cutting through. If one were to be nitpicking, the only aspect of the production which could be considered “not up to snuff” with the rest of the record would be the sound of the cymbals on Redlin‘s kit, which can sound a tad “bash-y” at times.

Overall, Trans Am Jams by SxWxP is a step on the right path for the Kentucky group. Should they continue on this path, it will only take them towards a promising future.

MUSIC NEWS: The Plot In You Announce 2020 UK/European Tour