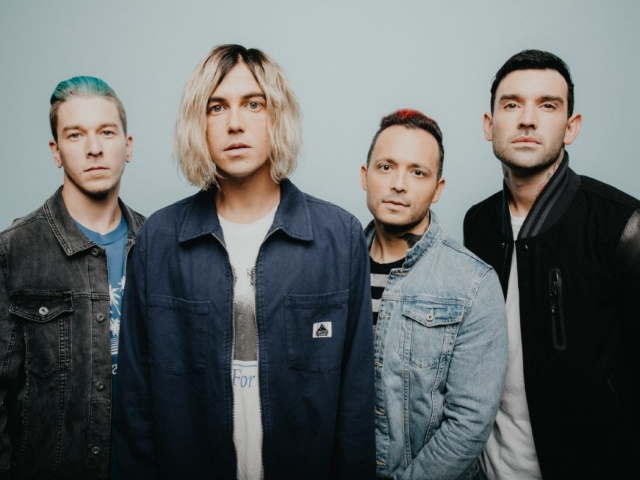 Making their mammoth return to UK soil following their appearance at All Points East Festival earlier this year, Florida’s formidable rockers Sleeping With Sirens winded down their UK leg of the How It Feels To Be Lost tour in London. It saw the Orlando outfit perform a sold-out show at Camden’s 1500 cap Electric Ballroom; a gig which was guaranteed to be both intensely intimate and enormously explosive.

Sleeping With Sirens have endured some switch-ups since their time at APE a mere six months prior. From their drummer’s departure,  the swapping of their sound to return to their post-hardcore origins, signing a brand new contract with Sumerian Record to seeing their lead singer drastically chop off and change his hairstyle, it seems for SWS that this tour is a time for transformation. Storming on stage, the official four-piece plus live drummer Matty Best kicked off the sixteen song setlist with the first dose of new album material. Delivered in the form of Leave It All Behind and How It Feels To Be Lost filled the sold-out Ballroom basement with aggressive guitar riffs, rage-filled screams and high octane energy from the offset of the opener.

“I felt alone like nobody understood me like nobody felt the way I did. So I wrote these words down because I was sure that maybe there was somebody out there that felt just like me. What that means to me is that together we’re not alone and if you feel alone tonight together we’re not alone”, states frontman Kellin Quinn post performing title track How It Feels To Be Lost, a sentiment of loss and loneliness new fans of the band resonated with so strongly as the small room erupted into applause of admiration for the lead vocalist. Swiftly departing briefly from the brand new material to take a deep dive into the Sleeping With Sirens discography, something for the long-standing supporters surfaced next. Starting off with the hard-hitting deep cut Tally It Up, Settle The Score before taking a detour to 2015’s Better Off Dead and back again to the Let’s Cheers To This era for a early staple of Do It Now, Remember It Later were guaranteed to get the mosh pits open and the sing-alongs amped up.

Transitioning into tracks A Trophy Father’s Trophy Son and Blood Lines, Quinn and co kicked off the similarly themed songs off the back of him taking the time to crush some social media critique. Commenting upon a tweet, where a mother denied her daughter from attending the bands show solely on her unpopular opinion of Quinn’s vocal tone, this tweet took the form of the family orientated lyrics in Trophy and Blood Lines. Backfiring against this adversity, Quinn placed the young fan on the guest list with a VIP spot for the show, a story ringing true to the track’s themes of family importance, something Sleeping With Sirens’ connection with the crowd conveyed throughout the evening with no blood relation required.

Taking the tempo down ten notches for stripped-back versions of With Ears To See, And Eyes To Hear and Roger Rabbit. With vocalist Kellin Quinn and guitarist Nick Martin taking centre stage as a temporary two-piece to perform acoustic renditions, the duos haunting vocals and hushed guitars were on full display for all to see and hear, taking some quieter downtime from the otherwise relentless set.

The second dose of new album material came in the form of a deep cut and two singles. Medicine (Devil In My Head), Agree To Disagree and Break Me Down respectively had hard-hitting guitars and bold bass lines by Jack Fowler, Nick Martin and Justin Hills, who put on an instrumental masterclass in modern post-hardcore and hard rock live music.

Coming out for the encore to see out their hour-long set, Sleeping With Sirens closed on If I’m James Dean, You’re Audrey Hepburn and If You Can’t Hang. Putting on an energetic, enthralling and explosive performance as per usual, even a decade after being a band, this full capacity Camden gig is guaranteed proof Sleeping With Sirens show no signs of slowing down soon 8.5/10