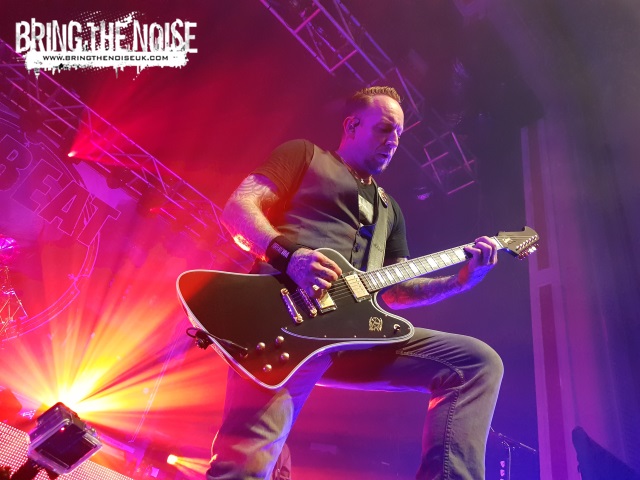 All too often modern rock and metal bands can become enslaved to a type and style of music which is more cookie cutter than innovative, with songs that are as stale as a soggy week-old Dorito you find crushed down the back of the couch.

It is at times like these when Volbeat smack you dead in the teeth with a welcome wall of distinctive, melodic and thoroughly unique metal-billy.

Volbeat are the band Elvis Presley would have fronted had he hooked up with metal guitarists on a three-day bender with a pair of punk rockers.

Frontman Michael Poulsen‘s love of 1950’s era music is obvious in Volbeat, but the Danish band perfectly and seamlessly infuse the vintage hooks with a punk, hard rocking n’ roll vibe, with the whole Volbeat house built upon the foundations of soul shuddering metal riffs of Slayer proportions.

The Great Danes – and American axe man Rob Caggiano, of course – are touring venues in the UK on a headline run, and Bring The Noise UK were there in the front two, horns in the sky, for their sold-out Glasgow show.

But before we snaked our way through the sea of shirts and hip-swingingggg rock n’rollers, we sat down with Volbeat bassist Kaspar Boye Larsen on the band’s lush tour bus – their home from home during their tour.

“It’s great to be on tour and I’m excited rather than nervous,” said Larsen cheerily.

“The tour started in Newcastle last night (Monday 23rd September) and we were a little rusty and we had a few technical issues but it worked out.

“I don’t get nervous anymore but the first show I ever did with Volbeat was Rock Am Ring in Germany, so to play a crowd of that size having only ever played venues of 200 before…that show was also delayed all the time because of bad weather so I was getting even more nervous. So now I don’t get nervous at all.”

Volbeat are regularly listed on the top of festival bills around Europe, but while they are UK festival favourites, and undoubtedly, Download favourites, they haven’t yet ascended to the heights of UK festival headliners. But surely, on this kind of form they are destined to be handed the keys to a headline slot at the likes of the Download Festival before too long.

They are – for us – one of a handful of bands which are strapped to the rock n’ roll rocket and are heading for headliner status sooner rather than later.

The likes of Avenged Sevenfold and Biffy Clyro have climbed the long and winding road to achieve Download Festival top-dog status as headliners and, in our opinion, Volbeat are en-route to join them as part of the new class.

Volbeat have it all for us.

“I don’t know how big we are here in the UK but it would be nice to get a headline festival shot as we want to play as big a stage as possible with as many people watching us as possible,” continued Larsen.

“The growth of the band has been huge. In 2006 I played a session job with Volbeat in Europe and the band were playing really small crowds. But you always want to expand and I have seen huge growth with Volbeat.

“We have supported Metallica and even more recently we were on the road with Slipknot, Gojira and Behemoth which was so different.

“We initially thought we have to play as heavy a set as we could but our heaviest song is just pop music to some of their stuff so we just decided to play what we usually do which was absolutely the right thing to do.”

But back to Glasgow and the world’s finest Elvis-metal band, as always, served the rock revellers crammed into the 02 Academy a platter of hard hitting tracks on a bed of ear-splitting, ass-kicking riffs, draped over some nectar sweet choruses.

Volbeat play music to thrill the masses. Internationally they have become a stadium rocking, festival headlining act, and similar status is surely to follow here in the UK.

Their set kicked off at a frenetic pace with Cheapside Sloggers sending the crowd roaring into life. Doc Holliday and Let It Burn followed before Pelvis On Fire, taken from their seventh album Rewind, Replay, Rebound, continued the horn raising, foot tapping, hair flinging and hip thrusting fun.

“I’m customised to do everything I shouldn’t do, I’ve learned all that I know by stubbornness and blues, I got my schooling more or less on the street, my eyes have seen a thing or two, and though my heart has made me weary…I like everything about you,” Poulsen belts out over a wall of soaring riffs and boundless energy.

Frontman Michael Poulsen, who is fondly nick named ‘Little Elvis’ by Metallica main man – and rabid Volbeat fan – James Hetfield, is the kind of frontman who demands your attention, cranking out riffs to rival anyone in the rock world, yet spinning yarns and telling tales with his thoughtful and interesting lyrics and song subjects.

Next on the setlist is the crowd favourite Lola Montez, which earns the biggest singalong of the night so far. The bluesy riffs and sugar sweet chorus prompt a rise in energy.

Sad Man’s Tongue follows before Black Rose and When We Were Kids, as the band dip deeply into their new record – the seventh notch on their album gun belt.

Volbeat released their seventh full length album Rewind, Replay, Rebound in August, and it was the first album where Larsen was part of the creative process, something he loved playing a part in. But he is quick to give a nod to his band mate Rob Caggiano for keeping him on the melodic path.

“I was nervous when the album came out as it was my first recording with the band,” he grinned.

“We had worked so long on the songs so to send them out was weird and we wanted people to like them, but overall the response has been great. Some people think we have gone too soft but we like a good heavy riff.

“I came from death metal in the 90s so adapting took some change. When I first started I still played very much as had in the day, so I changed it in first couple of tours but now I feel very comfortable.

“Some of the songs on the album were taken in fully completed by Michael [Poulsen] and didn’t need anything. Some others he just had an idea, vocal line, or guitar melody then we worked as a band together a lot on those songs.

“I can definitely hear my touch on a lot of those songs, but that’s probably because I’m listening out for my bass of course.

“I had free hands to do whatever I wanted, but Rob helped me a lot working on the basslines. He guided me in the right direction because I was still maybe a little bit too much hardcore thinking, so I needed a little melodic guidance from Rob.”

He went on: “Three of the songs were actually written in one weekend just before we went in to record the album as Michael felt something was missing.

“In one weekend he wrote three songs just like that and we recorded them just before New Year – the songs were Pelvis On Fire, Cheapside Sloggers and Sorry Sack of Bones.”

Returning to Glasgow’s 02 Academy and the big hits keep coming through Dead But Rising and the epic Fallen, but missing from the set is one of our personal favourites, Cape of Our Hero.

Volbeat bassist Kaspar Boye Larsen acknowledges it is a track the band love to play and would like to include in the set, but he explains it is a song that doesn’t always translate well to the live setting.

“We change the set more in the beginning of the tour to see what works and what doesn’t,” explains the Volbeat bassist.

“Within some shows we find the formula but there are always some spots to work something different in. We actually love Cape Of Our Hero and personally it’s one of my favourite Volbeat songs, but it is so weird that whenever we play it it has a such a weird response.

“We would rather play a song the crowd sing back and have a good time to, rather than just play a song we like personally and very often Cape doesn’t get a good reaction live.”

Sorry Sack of Bones, Seal The Deal, Last Day Under The Sun and The Devil’s Bleeding Crown follow, as Poulsen and co barely stop for breath in their sweat soaked set.

A brief step off stage precedes a triple shot of metal for a welcome encore, as Rewind The Exit and Leviathan see the boys once again race through at a greater pace, with more engine than an entire season of Top Gear.

The black curtain falls on a night to remember with the anthemic Still Counting, which again has the entire venue on their feet for the world’s greatest Elvis-metal sing-along.

“Counting all the assholes in the room…Well I’m definitely not alone, well I’m not alone…” sang Poulsen with his band’s closing track.

Prompting a mass singalong and rhythmic foot stomping session, the song brings to an end a set of just over an hour. Volbeat are far from alone. Volbeat are rocket strapped and we are all going for the ride.