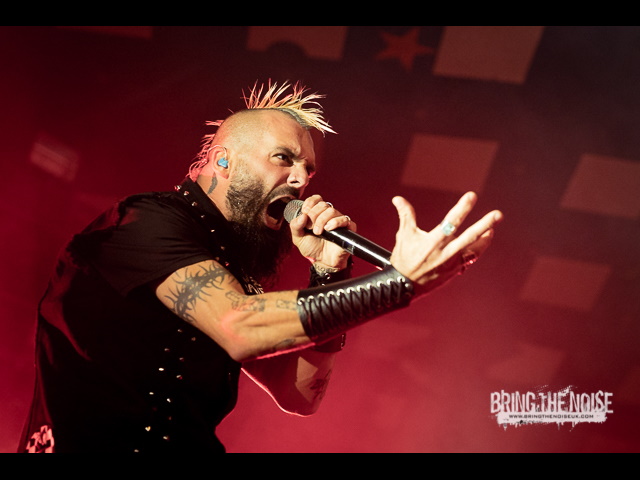 Metalcore in the modern age feels a lot like a photocopy of a photocopy of something that was once so, so great. Some would make the argument that Killswitch Engage’s deft blend of early 00’s metalcore muscle with an ear for hooks and big melodies was the beginning of the end. But it would be totally unfair to blame the architects for the mistakes of those who followed them. When they took to the Barrowland Ballroom in Glasgow recently we were there to witness them live in support of their latest album Atonement, check out our review and photo gallery below.

20 years into their career, Killswitch Engage are on a form that most bands would kill to be in at their prime. Tonight’s set-list is 17 bangers, almost back to back. Furious breakdowns, iconic riffs and sing-alongs that threaten to frequently drown out the band feature in every song played through the evening.

Where the band’s supports felt stilted, bloated and formulaic, Killswitch have a truly unique sonic identity. They never really stray too far from the original sonic blueprint, but every song has it’s own slight twist, or at least a gargantuan hook, on the winning formula.

Sans the click tracks and backing tapes that define so many modern metalcore bands, Killswitch rip through the set in a fashion fueled as much fun as ferocity. As punishing as tracks like The Crownless King and This Is Absolution are they are offset by the soaring, majestic heft of A Bid Farewell, the rich melody of Beyond the Flames and of course the enormous sing-along that accompanies The End of Heartache.

The Signal Fire proves to be a particular highlight, perfectly showcasing the fact that though Killswitch are credited at bringing the melody into the mainstream for modern heavy music, they’ve much more in common with extreme metal than they do modern radio rock. It’s also reassuring to see that as the band get older, they’re not leaning into the expectation of slowing down. If anything, they’re doubling down on the extremity.

Jesse Leach remains a force of nature as frontman, the slight rasp and blues influence on his singing blending perfectly with his caustic screams, bringing a sense of authenticity and sincerity that so many bands lack. These songs sound like how they feel, they don’t sound like they’re trying to emulate a sonic expectation. Bands with a frontman of less talent and honesty than this would suffer to make music like this work. Some of the comedic interplay with guitarist and mastermind Adam D is noticeably absent, but possibly only because there’s no time when there’s just so many great songs to play.

To be honest, there isn’t a hole to pick in this set. If someone was of a particularly unkind disposition, they could say their creative pallet is a little limited. Simple variations on a well-trodden theme. But they would lose the argument when it comes to performance or songwriting prowess. How many bands can put their breakthrough single as the fourth song in their set and still up the ante from there?

Killswitch Engage might well now be elder statesmen of the genre, but they won’t be stepping down to any challengers anytime soon.

VIDEO NEWS: COUNTERFEIT. Release Video For ‘It Gets Better’