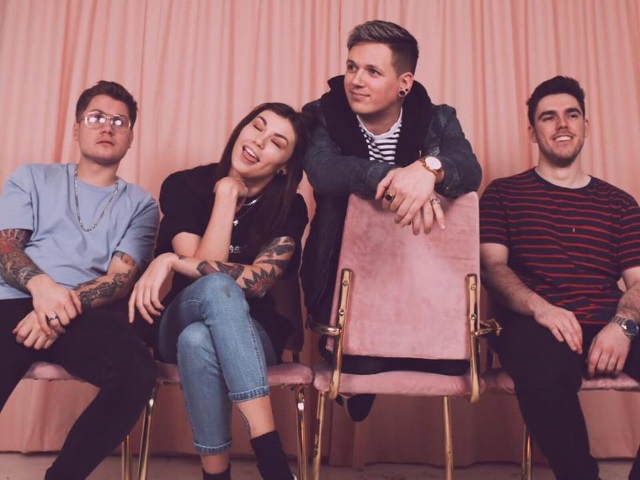 In a world where words like “genuine” and “refreshing” are thrown around the music scene more than bottles of urine used to be thrown around festivals (and we do NOT miss those days); as a writer, you learn to ration them. Clichés are a marvellous (if not lazy) thing, therefore there really are times where you simply cannot avoid them. So yes, Hot Milk are both refreshing and genuine…but hear us out.

When speaking of clichés, Hot Milk are literally anything but, and it’s an absolute delight to see them both on stage and at interview. They say what they think, they make the music they love – and they’re not apologising for any of it. It’s a good job they’re a talented (and bloody hilarious) bunch then, isn’t it?

Here’s what Hannah and Jim from the band had to say recently at Download Festival. And trust us, you’re going to want to read it all.

We’re at Download today, who are you most excited to see?

Jim: nothing,nowhere., definitely. Slipknot, obviously. I’ve not watched Slipknot before, I’ve never been to Download before.

As a band, is this your first festival?

How was that experience – was it was you expected?

H: Yeah, it was even more than what we expected I think.

J: Yeah, we didn’t know how many people would turn up but like, we walked out and…

J: Yeah it was fucking great.

H: And just to have people singing the words back, it’s always nice, so. It was just like… my heart was full.

We noticed you guys had a really good crowd. It’s nice, especially because it was quite early…

H: Yeah, and it’s a heavier festival. We’re not exactly the heaviest band in the world. We do have some elements of it but yeah, you never know.

H: It’s exciting though, not knowing.

Fair enough! Look, when you’re preparing for a festival, is that any different to the preparation you’ll put in for a normal show?

J: No, we try to do every single show the same. We want to bring as much fun and to it and as much – I don’t know – energy to it. Us two are like…

H: Bouncing off each other.

J: We are horrendous. We’re the most irritating people to be around.

H: I think we just want to be known as a good live band. If you come to Hot Milk we want people to go, okay, that’s going to be a SHOW.

J: And to feel welcome, like, there are a lot of bands that take themselves seriously. We just wanna get everyone involved and it’s the same with a 100 cap show or a festival…

H: Or when we’re playing with Foo Fighters, it’ll be the same! We will speak to everyone in that crowd and make sure everyone is enjoying themselves essentially.

What’s going on in your world right now? What’s this year looking like for you?

J: Well we’ve got a load of festivals on right now. Hopefully touring at the end of the year.

J: So much writing.

H: We’ve got so many songs, probably about 25 songs, ready to go. If we had to pick an album right now we could. But we’ve got a lot more in us so we wanna go write. Probably go to LA for a bit, write some songs out there – just ‘cause like we prefer the process out there. It’s nice to get away for a bit.

Exactly. We can understand that. So if you think about where you are right now, and what you’re doing. You’ve just played Download – an incredible feat. Where would you like to be in a year?

H: In a year?! Back here. Higher up the bill! Why not? Sky’s the limit. You ask me in ten years? Headlining Reading & Leeds. We don’t wanna stop. We wanna keep climbing and climbing and bringing more people into this family, because that’s what we want. I’m not gonna lie. I feel lonely all the time. And the only time I don’t feel lonely is when I’m on that stage. So the way that I can do it is just bring more people in and just keep climbing and climbing.

J: It’s the reason I started a band.

H: It’s the reason I started a band, too. Exactly, yeah.

So, in a way would you say music is therapeutic to you?

Were you guys in previous bands together?

H: We were both in bands before, but just not together.

J: Yeah, just trying to find our feet. Working out what we wanted to do.

H: We played so many shit gigs, didn’t we. We played pubs, all sorts.

You have to! It happens.

H: Of course! You’ve gotta go through all that first!

We don’t really trust bands that never went through that stage!

H: Well, yeah! Lugging your amp up seven flights of stairs in a pub just to play to ten people. We did that for YEARS.

J: Exactly. Sleeping in vans on the side of B roads…

H: Shitting in a bucket in Germany!

Shitting in a bucket?!

J: She’s called “Shitbucket”, that’s her nickname. That’s what everyone calls her!

H: No it isn’t! One person calls me that!

That’s going in guys, just so you know!

H: That’s fine! Look, you’ve gotta do these shit things before you get to the goal, and hopefully now we’re on the right path, so.

J: Sticking to our guns. We’ve got a strong team around us, they respect us.

J: Hannah and I have had this vision for like, a year and a half now.

J: We knew what we wanted to do, and we’re still doing it.

H: We just needed help executing it and I think we’re so in control of where we’re going and we’re at the steering wheel, everybody else – so anyone that’s a fan or whatever – is the gas that drives this thing. They’re the wheels! And we’re really just thankful that people give a shit. And I will be thankful ‘til the day I die. This is a blessing, really. It’s an amazing thing to be able to do. I’m so grateful!

One final question. We’re going there, and by “there” we mean we’re heading to the feminist side. Do you think it would have been possible ten, fifteen years ago to do what you’re doing now?

H: Absolutely. Do you know why? Because people forget about the Riot Grrrl. They forget about Joan Jett. They forget about Bikini Kill. They forget all these girls that pioneered punk music. Way before we were born. But because there was a gap where no-one was a girl they forget about all that. And no-one’s taught about it. That’s where I’ve found my empowerment to be a musician, because I went backwards instead of forwards when I was younger. I went back to that punk era. So that’s who’s my inspiration. You know, those girls that were nailing it back in the seventies. So it would have been possible. If I was the age I am now, I would be saying exactly the same thing. So fuck ‘em.

That’s awesome. That’s a brilliant quote to end this on. Alright, thank you Hot Milk!