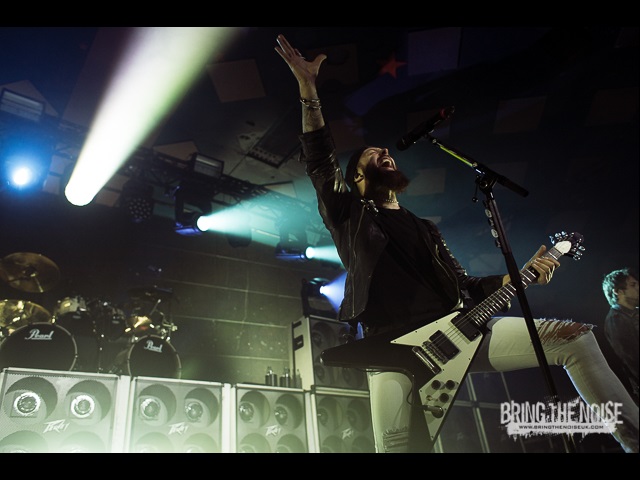 The Barrowlands is a legendary venue. Easily Glasgow’s best, and though it’s criminally underused these days, when a band books there it tends to be a sign of “we know we’re on top form and we need a venue that can handle that.” What tonight proves is that there’s an exception to every rule.

Opener SHVPES give it a fair go, but something doesn’t quite connect with their music. The band’s initial contemporary metalcore sounds have been replaced with a nu-metal bounce and borderline raps, bolstered by samples that feel terribly zeitgeisty. They’re all talented players, and there’s moments of great fun peppered throughout their half hour, but ultimately…this feels like a bunch of guys trying to be in what people would think is a cool band, instead of a band who feel genuinely cool. 6/10

On the other end of the spectrum, Cancer Bats don’t feel like a band trying too hard. They sound like how they look, a bunch of punks who love raging to heavy music, and the Barrowlands is perfectly suited for a band with this much confidence, energy and great songs. 9/10

Unfortunately, they’re wasted on a room that’s probably just over half full. It seems that Bullet for My Valentine don’t pull the crowds they once did. On the other hand it is Slam Dunk weekend, so maybe the band’s fanbase are already out of town. Regardless, the attendance tonight is less than inspiring, it seems the idea that Bullet were British metal’s great hope for a new massive band is long gone.

Instead what we get is a slick, professional and for the most part well considered set. It would be worth the band taking note though that they sound at their best, and the crowd love it more, when they lean into their faster and heavier tracks. The mid-tempo, lethargic thrust of newer tracks like Over It don’t cut it in quite the same way.

There’s also a weird aspect to Matt Tuck’s persona. When playing he seems like a supremely confident frontman. A sincere rock star, convinced of the quality of his band. His between song banter though almost feels arrogantly disinterested. It’s not a criticism of the band’s performance, but when they aren’t playing the atmosphere is noticeably a bit odd.

If there is a real issue with this set, it’s the fact the band included a drum solo. It’s a move that feels lazy, uninspired, dated and weirdly arrogant all at the same time. It doesn’t matter how talented a drummer Jason Bowld is, and he is, this kind of throwback 80’s excess rock star behaviour doesn’t fit the kind of modern band Bullet want to present themselves as. 7/10