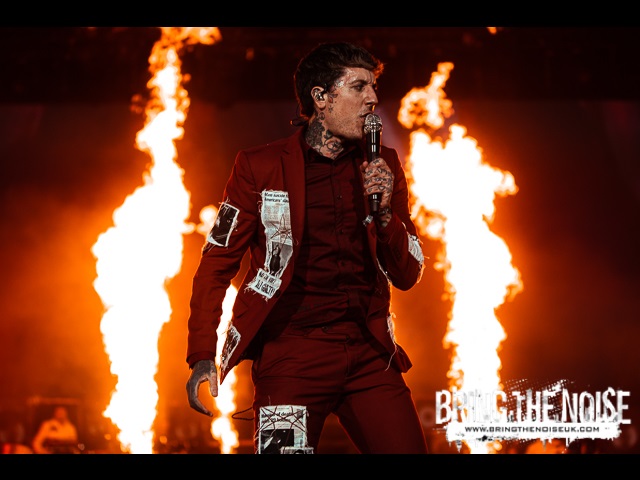 A two weekend takeover of music, All Points East Festival returns for its second year, residing in London’s leafy Victoria Park. Playing host to some of the most exciting names in music, the festival’s rock ruling line-up on Friday 31st May saw headliners Bring Me The Horizon play a career-spanning set. The band’s self-curated bill brought performances from Architects, Employed To Serve, IDLES, Run The Jewels, Scarlxrd, Sleeping With Sirens,While She Sleeps and more across the festival’s six stages.

Kicking off our day on the East Stage, Brit rapper Scarlxrd delivers trap metal mixes of booming beats and soul-shaking, screamed vocals. Manifesting his outlandish style on the main stage, Scarlxrd and sidekick DJ Jacky P immediately emit enthusiasm, bouncing pillar to post in the midst of delivering hit Heart Attack. Big bass drops divide the crowd into colossal circle pits, as Scarlxrd tells everybody to down their drinks and get down to the overlord’s heavy-metal-meets-hip-hop discography, notably tracks from his recent record INFINITY. Despite being a set early in the day, it’s not short of an eccentrically energetic stage presence. Scarlxrd‘s slot on All Points East Festival follows his Stateside support on Bring Me The Horizon‘s The Second Base Tour, bringing his festival fit persona to APE. 6/10

Shifting stages to see a band whose mantra beckons to breakthrough the misery of the mundane, Employed To Serve’s short, seven song decimates the festival. Firing up the ferociousness from the opening note of Eternal Forward Motion to the closing number I Spend My Days, Wishing Them Away, Justine Jones‘ vocal show had dominating dark tones. The unforgiving, relentless live charge rolled on through the thick haze of stage smoke shrouding the hardcore band, a fitting sight to the explosive sounds. 7/10

Forecasting the noise of future punk on the Firestone stage, dystopian pair Black Futures curate rough, industrial rock which creates an enthralling and immersive experience. Flying flags across the stage, masked individuals adorned head to toe in science suits shuffled on to the sounds of Siri’s digital dictatorship, counting down the clock in anticipation for the arrival of the black boiler suit wearing band. Convincing the crowd to come aboard The Black Futures Expedition Club, cult-like leaders Space and Vibes are unleashed into the depths of the crowd, sadistically screaming single Me.TV in fan’s faces. The dynamic duo spread the song’s concept of community before continuing with their anarchic anthems to close off their set. 9/10

Back on the East stage, Bristol-based IDLES‘ audacious attitude and passionate angst brought bags of character, comedy and confidence. The band deliver blatant basslines, killer kick drums, motorik rhythms and rough and ready vocals. Joe Talbot and co caught the ears of listeners who were accustomed to albums Brutalism and Joy As An Act Of Resistance, as well as the eyes of onlookers, as guitarist Mark Bowen bared all strutting the stage. Audacious actions aside, the band are advocates for modern day issues and movements amongst society. Empowering the mystical female kind in Mother, encouraging the male species to express their emotions within Samaritans, and epitomising the equality of immigrants throughout Danny Nedelko, IDLES‘ air of considered carelessness made for a memorable set. 8/10

Next on the Morth stage, Florida’s Sleeping With Sirens crammed in a fleeting eight song set that didn’t skimp on the band’s signature savagery. Beginning their blistering act with Do It Now, the audience jumped with boundless energy, from the passionate fans at the front barrier to the unbiased bystanders at the back. Next up, Remember It Later provided catchy choruses supplying major singalongs. Revolt antics rolling on, Masked by a mop of bleached blonde hair, vocalist Kellin Quinn encourages the audience to raise their middle fingers in a demonstration of defiance to kick start Madness single Kick Me. Ending on an exclusive live debut, Sleeping With Sirens called upon new track Leave It All Behind, taken from the yet-to-be announced follow up to the pop-tinged Gossip. Audacious, amped up instrumentals accompanied by Quinn‘s versatile vocals, the song is a hardcore sonic storm. Sleeping With Sirens signified the beginning of an era at All Points East, that promises to return to hard-hitting, heavier roots. 9/10

Welcoming the sea of supporters to the GUILTY PARTY, While She Sleeps‘ spin on modern metal makes them leading performers in the scene. The metallic hardcore quintet storm on stage below the blazing sun, as the worthy anthems of fourth full length SO WHAT? fill the North stage. ANTI-SOCIAL‘s powerful sonic output made the stage screens shake, bulldozed by breakneck drumming and screamed vocal sections, spurring on the crowd to erupt into a clashing circle pit. The moshing continued into Silence Speaks, as the band brought out Bring Me The Horizon frontman Oli Sykes, further ensuring While She Sleeps‘ relentless performance. 8/10

American hip-hop outfit Run The Jewels deliver a show of party-like proportions. Despite performing the pair’s most popular festival fits from Close Your Eyes to Legend Has It, the duo’s production appeared hard to hear over the colossal clamour of the crowd. As their set drew to a close the duo took the time to respect their jewel runners, reciprocated by the crowd as chants of ‘RTJ’ rang around the grass. The dynamic duo exerted pure elation to be playing their All Points East debut. 7/10

Pit-stopping prior to Bring Me The Horizon‘s hugely hyped-up headliner, Architects closed the North stage with a searing show that delved into the depths of the band’s chaotic angst and admirable courage. Sam Carter took centre stage to signify the importance of speaking to someone in tough times of self struggles, which smoothly segued off the back of Holy Hell‘s heavy-hearted Modern Misery. Followed by the emotionally endearing anthem Doomsday, Architects‘ All Points East appearance didn’t disappoint, and as beaming electric blue production emblazoned the stage, the band deliver one of the most enlivening sets of the day. 8/10

Bolting back to the East stage for the pinnacle of All Points East, Sheffield rock export Bring Me The Horizon delivered a career-spanning set. From 2006’s Count Your Blessings to 2019’s amo and everything in between, the twenty track setlist delivered all of the trademarks of a two-hour show. The performance wasn’t without its stupendous scale of production: from opening rock anthem Mantra; an acoustic rendition of Sleepwalking; a rendition of Pray For Plagues, which welcomed Oli Sykes‘ signature screaming; and an enthralling encore of Throne. A two-towered stage provided a platform for nineties electronic dancers, who appeared during the likes of electro-pop number Nihilist Blues. Flame throwing fire displays initiated a triple threat of guest appearances. Adorned in his Cradle of Filth attire, Dani Filth dominated for a ferocious version of Wonderful Life, Lotus Eater‘s Jamie McLees appeared for a manic performance of Antivist, and Architects Sam Carter sang side by side with Sykes for a rare rendition of The Sadness Will Never End. It seems Bring Me The Horizon will continue to craft their compelling, style-switching identity, that remains to be as distinct and daring as their career-spanning set-list, concluding what has been an unforgettable day at All Points East. 10/10 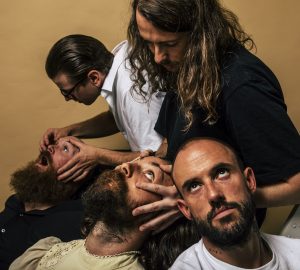