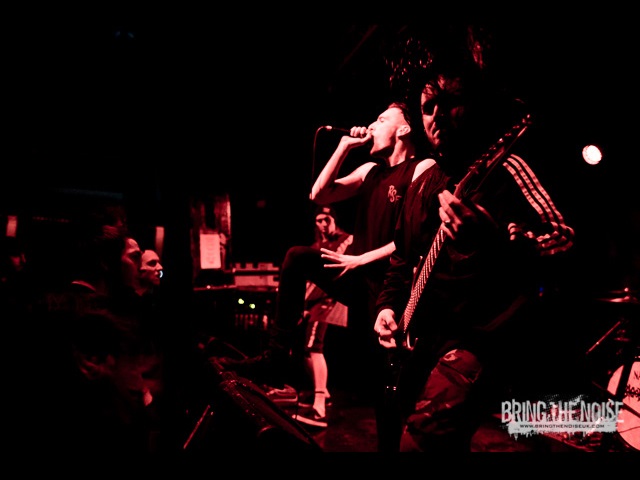 Lotus Eater’s laptop plays some cool sounds tonight. The band themselves not so much. There’s very little to differentiate any of their tracks, the low tuning, mid-tempos and monotonous shouting all blend together between the endless amount of breakdowns. A large portion of the band’s hometown audience are bang up for that, but if you aren’t…the only thing that really helps you tell when the song is finished is the cringe worthy, violence-inducing stage banter between songs.

This strain of heavy music, where the focus is on the live violence and chaos, doesn’t translate well unless you’re invested in joining that pit. If you’re looking to enjoy the sounds coming from the stage, this kind of delivery and attitude is difficult to get on board with at best. 5/10

Palm Reader stick out on this bill like a sore thumb. Their potent blend of savage, angular post-hardcore and art rock is rich, textured and expansive. The band’s performance is as tight as it is emotionally raw, and there’s nothing missing from their set. Except for more songs, as their set seems unexpectedly short. Which is a shame when they’re on such fine form with an album like Braille behind them.

It remains one of the biggest injustices of modern rock music that a band this talented and hard working are still supporting and not headlining venues like this. The closing track, A Lover, A Shadow, is the most powerful example of this. There isn’t a song by any band that trumps this tonight. 9/10

People say if you form a band, play the music you love. Or they tell you do what’s cool for the money. Blood Youth are only listening to those first people. Well…that and a whole lot of turn of the century post-hardcore and nu-metal.

The execution of their nostalgic heavy music worship is hard to argue with. Despite a slightly disjointed entrance to the stage (if you’re going to have a worked intro, it’s important it’s seamless), the band are impressive from the off.

What Blood Youth do lack in originality they make up for with conviction. Clearly this band love what they play, and if the result is good there’s no reason to begrudge them wearing their influences so clearly on their sleeves.