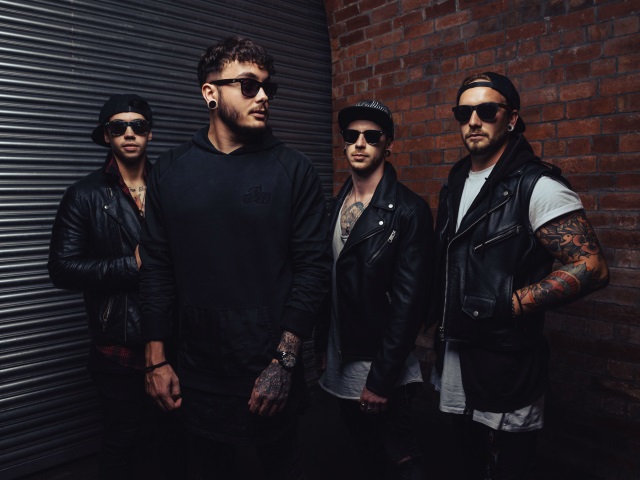 InVisions have been non-stop since the release of their new album Between You & Me, spreading their new music far and wide on a current tour throughout Europe with Our Hollow, Our Home, before they make their mark on UK shores with Glamour Of The Kill. In the midst of the dates we caught up with vocalist Ben Ville to hear his top tips and stories from the road.

I love all aspects of touring. You get to go to places that you would never really think to visit, and meet people you would never have met otherwise. It makes it easier when you’re surrounded with people that you’re close to, it’s almost like you’re on holiday.

When someone in the van unleashes their butthole. Driving down the highway and smell that resembles a pig farm hits your nostrils is the worst. Or when our photographer Cris is in a mood because he hasn’t been fed yet – that’s something I wouldn’t want anyone to experience.

The top priority for the road is beer, it helps the long journeys pass and well, it’s beer… of course you need it. After that is kitchen roll or something for when Al Scott (guitars) spills said beer, because you can guarantee that will happen. The dude is so clumsy. Phone charger – you gotta keep yourself entertained. Next up is a pillow, comfort when it’s late and you’re tired and just want to get your head down. Next for me is headphones, when you just want to zone out and get into your own headspace they are ideal!

I think time goes pretty quick anyway, most the tours we have done have flown by. But usually to pass time we just drink beer and chat shit. When beer is involved we practically have our own language. Sentence structure isn’t a thing.

This is easily playing Download Festival. It was such a dope experience. It was my first time even attending the festival so that helped make it unforgettable!

We were playing a show in Manchester supporting Slaves, I had just got myself a new wireless. We start the set and the mic keeps cutting in and out, so I’m doing my thing and people out front only hear me popping in and out of songs. Lame.

We were in Exeter outside the venue just chatting bollocks. An old man came over and started groping at Josh’s arm and said “that’s a nice muscle” and then continued to pull up his trouser leg to show us his humongous calf muscle… Weird dude!

Hmm, there’s been a few of these and most of them I can’t remember due to being drunk.. The best drunken times are just in the van when we are all hammered on the way to a hotel. The blue mood lighting is on, tunes are blasting, nothing makes sense and everyone is talking shit. Al and Josh (drums) being the main shit talkers!

Signing to Stay Sick Recordings. When you constantly bust your balls and someone recognises the efforts and want to help pursue a career is dope. We have built an awesome team so far, the only way is up!

See InVisions live at one of the following shows:

You can also see InVisions at Blackpool Hang Tight on 1st June, and Diafol Fest on 27th July.