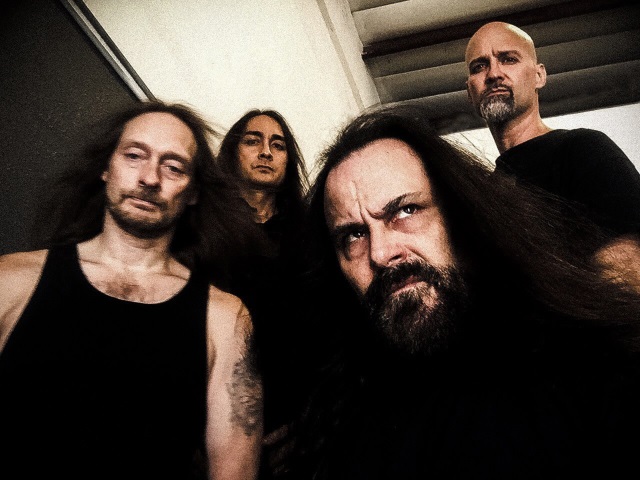 The past few years have seen a real resurgence in the old guard of death metal music. Bands who were laying waste to stages and putting out revered albums in the late eighties and early nineties have been rediscovering their mojos and creating some of the most exciting music of their careers. A couple of prime examples of this are Cannibal Corpse, who released their savage fourteenth album Red Before Black at the back end of 2017, and Dying Fetus who did the same with their excellent Wrong One To Fuck With album.

Another band that is looking to maintain its current streak of form is Deicide. The band’s most recent release In The Minds Of Evil saw the quartet abandon virtually all of the more melodic elements that they have included on their previous few releases, embracing their old school death metal roots. Now in 2018, the band are armed with their latest collection of macabre metal offerings entitled Overtures Of Blasphemy – and an apparent new lease of life.

The album opens with One With Satan and the title couldn’t feel more apt for Deicide here. The track starts with a trudging, sinister introduction before giving way to the band’s colossal death metal sound. This is blasphemy at its finest and wastes little time in showing what the four-piece does best, and that is creating a sonic barrage of high intensity guitar riffs and drums that resemble heavy artillery. Frontman Glen Benton is on top form and sounds as demonic and utterly terrifying as ever as he delivers his gut wrenching, low-end vocals over the top of the chaotic musicianship, proving that he is still a step ahead of many death metal vocalists decades younger than himself.

The following track Crawled From The Shadows is one of the real highlights from this album. Beginning with high speed, tremolo guitars riffing and rapid double bass drumming this opening section of the song could easily pass for black metal, before Deicide shift back to their usual death metal stylings. The main draw of this song is the chorus, which has a fantastic vocal part that follows the rhythm and notes of the guitar riff to almost give off a sense of melody… ALMOST. This makes for a strong refrain and a part of the album that sticks in the memory, and for a band such as Deicide creating somewhat of a hook is not what you would expect.

As you delve deeper into the bowels of Overtures Of Blasphemy there is the song titled All That Is Evil which kicks off with a real groove. This is head banging bliss and will give the moshers in the crowds something to really sink their teeth into. The drum work from Steve Asheim is as truly extraordinary as it always has been, with the sheer energy and power surging through his beats coupled with the rumbling bass lines thrown down by Benton, making an air tight rhythm section. This gives the guitarists Kevin Quirion, and more recently Mark English, a platform to lay their thrash inspired leads onto, which they do wonderfully here, trading off guitar solos that match the changing tempos of the song perfectly with their surgeon-like precision.

The groove elements are quickly thrown out of the window for Excommunicated, which is pure savagery from the outset, with some of the most technically proficient guitar work on the entire album being put on display. Deicide fully embrace the more thrash metal elements of their sound with shrieking, wailing guitar solos that threaten to rip the bridges right off of their instruments. The vocals have been mixed in such a way that they overlap during the chorus for extra effect, but not to the extent that they will be hard to pull off when performed live and with lyrics such as “Excommunicated and the death of your lord. Beheaded holy saviour and to bathe in his gore,” it goes without saying that Benton is at his venom-spitting finest.

The back end of the album feels a lot less spectacular. This is not because the songs are poor by any means, on the contrary Defying The Sacred, Consumed By Hatred and Destined To Blasphemy are all decent tracks with plenty of the expected ingredients of Deicide’s formula getting thrown in to mix. However, they feel a little more by-the-numbers and by his point in the album you need a little something more to engage you.

So to summarise this album is a generally solid effort. The front half is superb with plenty of excellent death metal tracks and some great variation that will not only appease the band’s long-serving fan base, but will also introduce a younger generation to the brilliance that is Deicide: a trail blazing death metal act that have been putting out blasphemous epics for over three decades at this point. It’s just a shame that the album falls foul to the age old death metal curse and ends in a rather monotonous and repetitive way.

Standout Tracks: Crawled From The Shadows, All That Is Evil, Excommunicated