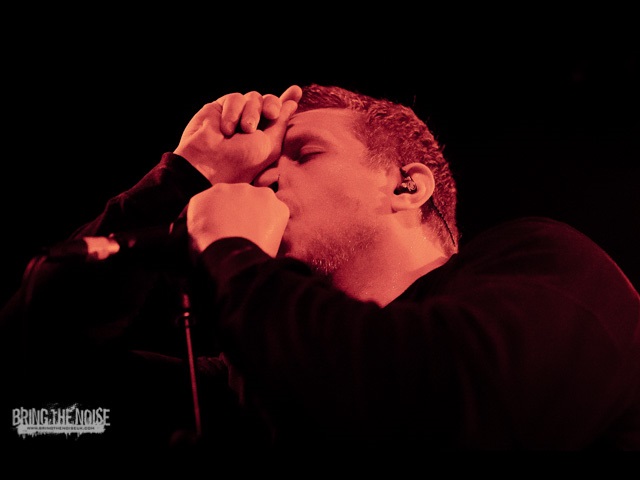 Palm Reader’s latest record, Braille, is a revelation. A much needed shot in the arm to intelligent and diverse heavy music in the UK. Britain has never truly produced bands with catalogs as influential and varied in heavy terms as Neurosis, Converge or Dillinger Escape Plan. But we do have Palm Reader, and it’s a great injustice they’re supporting on bills to rooms that aren’t filled to the rafters.

Musically the band are machine tight, but the performance is so caustical and aggressive it never feels less than vitally organic. The band’s newly refined sense of light and shade sounds huge and thick, engulfing everyone in the audience. You read about how wonderful it is for bands to be this passionate about their music, but rarely is played out on stage like this.

If it does turn out that the music industry does recognise talent, integrity, creativity and sincerity then there are no doubts at all that Palm Reader will smash the glass ceiling they’ve been pummeling for years any day now. And even if that ain’t the case, they’ll love most of their contemporaries limping from the shattered glass in their feet.

It isn’t easy to translate music as lush and as intricate as that of The Contortionist live. It’s even more difficult to make it feel as immersive and effortless as they do.

The band’s last two records, 2014’s Language and last year’s Clairvoyant form the bulk of the evening’s set, with the rich sonic textures of the songs washing over an avid, if small, crowd. It’s a shame that so few people are here, bands of this quality should be selling out clubs this size. It’s disheartening that The Contortionist aren’t given their undeniable quality.

Given the bands initial roots in technical death metal, the immeasurable musicianship of the instrumentalists in the band almost goes without saying; but it is worth mentioning that their move from musical ferocity to the almost unfathomably rich and lush melodicisms is quite stunning.

What really sets The Contortionist apart though is vocalist Michael Lessard. In the soaring, high end and squeaky clean world of progressive metal singers, Lessard stands out as refreshingly organic and thoughtful talent. His soothing, considered melodies dance over the band’s textured soundscapes, weaving rich visual metaphors over the music. His occasional deployment of an impassioned roar only adds yet another stunning musical contrast to the band’s musical palette.

This feels like genuinely thought provoking, progressive music, avoiding all the pretentious, self-indulgent cliches of their peers. It’s just a shame so few people seem to be willing to put the effort into discovering it.

MUSIC NEWS: The Faim Announced As Support On Against The Current Tour