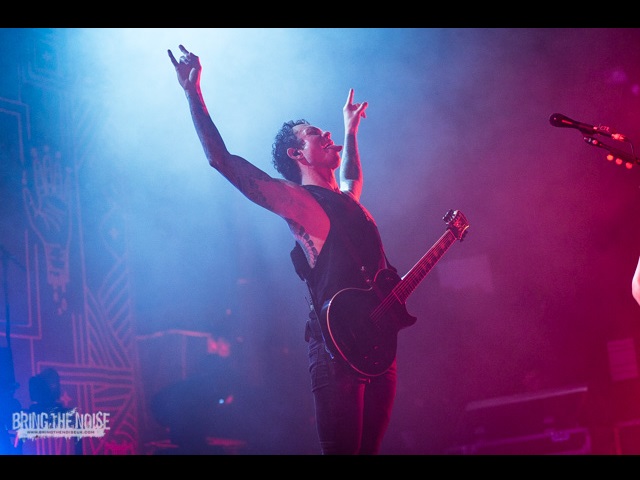 Tonight we’re out for the tour that everybody has been talking about: Trivium take to the O2 Academy Glasgow and bring Code Orange, Power Trip and Venom Prison along for the ride. Unfortunately we only make it to the venue in time for Code Orange, but that is more than enough for us to sink our teeth into.

Code Orange appear in the press like they’re very much on board the industry hype train. Live, Code Orange are quite obviously the roaring, uncontrollable fire at the heart of the engine of the industry hype train. Roadrunner’s deep pockets have ensured this band are everywhere, but the reason everyone is talking about them is because of their live show. Both Forever and I Am King are great records, and a set composed entirely of tracks from those records is incredibly powerful to watch.

Which isn’t to say that it’s just the fact that Code Orange are so physically wild that makes them such a compelling live act. Their blend of chaotic hardcore and harsh, dense industrial influences makes for a totally immersive experience.

Musically the set is almost exclusively breakdowns built on a foundation of stuttering, textured synths, further illustrated with dissonant guitars and ferocious screams. The industry have their hearts set on defining this as innovative, which it isn’t, but it is immediate, compelling and incredibly satisfying.

Were it not for the darkly brooding and borderline art rock of Bleeding in the Blur it would be pretty easy to right Code Orange as a violent and effective one trick pony; but the potential for the band to explore the same kind of anger and nihilism that defines the rest of their music in a different soundscape is obvious and intriguing.

Regardless of their future, Code Orange are one of the most vital bands of the present. If you get a chance to see them and you miss it, you’re doing yourself a disservice.

Trivium’s biggest advantage is that they’re still young. Trivium’s biggest disadvantage is that they’ve been doing this for a long time; they’ve more than a couple of dodgy records under their belts. That being said, they also have four absolutely standout records and four of the most impressive musicians in heavy music. It would be incredibly difficult for anyone to name another band who are anywhere near as effective as combining all the greatest elements of heavy metal into such accomplished songwriting.

Sets like this make you completely forget about missteps. This current record, and this current live line-up, is Trivium at their absolute strongest. They almost effortlessly combine extremity with melody and technicality with accessibility. This is a masterclass in professionalism and technique, a near-perfect execution.

Even better, this isn’t a band who have rehearsed themselves to the point they’ve lost all spontaneity. It’s obvious how much the band are revelling in their new music and celebrating their old favourites with their fans, and it creates an almost unstoppable feedback loop of riffs, sing-alongs and raucous cheers.

It would be disingenuous to pretend that Trivium aren’t relying on nostalgia at all, the amount of material from Shogun and Ascendancy in the set is proof of that. But what is also certain is that anyone here for the old songs is immediately converted by the undeniable quality of tracks off latest LP The Sin and The Sentence; arguably now the band’s best record by some distance.

Trivium might never be the new Metallica that they were tipped as when they broke in 2005, but that’s fine. Who wants to be the pale imitation to succeed when the primary version finally realises just how old and fat it is? Trivium are their own band. They’re cutting their own path, a path based on sincerity, passion and a wide musical canvas.

If the rest of Trivium’s career is made up of shows like this and albums like The Sin and the Sentence, they won’t go down as that band who followed the leaders; they’ll go down as leaders on their own terms. 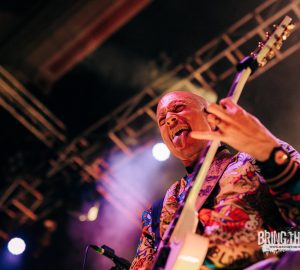