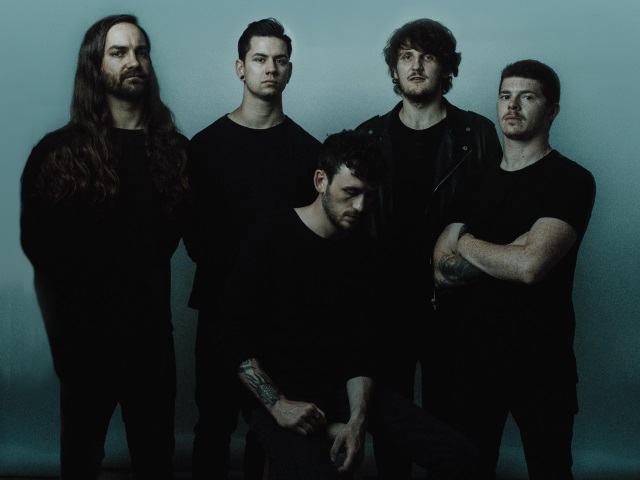 There is something to be said for good old fashioned work ethic: in this day and age it is incredibly refreshing to witness a band that is prepared to really graft and work at their craft and not expect everything to fall into their lap. One band that truly seems to encapsulate this DIY attitude is Palm Reader. The band were formed in the county of Surrey in the South East of England (the same county that spawned the overnight sensation Employed To Serve) in 2011 and since then have barely spent any time there as they are constantly on the road.

The band’s first self-titled EP was released in the spring of 2012 to critical acclaim and showed the promise that these young lads had for the future. They then hit the road relentlessly handpicked by bands such as Gallows, Touché Amore and Pianos Become Teeth to support them on their UK tours, before hitting the studio and releasing their debut full length album Bad Weather in the spring of 2013. Once again the band caused uproar amongst the UK press with Kerrang!, Rock Sound and Terrorizer magazines all giving the album near-on perfect scores. This was then repeated on the band’s second full length release Beside The Ones We Love, the album once again receiving nigh on perfect scores.

The band now sit upon the release of their third full length album Braille, and hopefully this time around the band will have the same high level of material that they have always had in the past, coupled with some of the luck that is so necessary to become a household name in this day and age.

The album opens with the track Swarm which is the lead single and promotional spearhead of the album. The reasoning for this decision becomes apparent very quickly as the track displays from the outset what Palm Reader excel at, and that is creating ferocious sounding punk/metal tracks with just the right dosage of melody fed in to appease everyone. The vocals from Josh McKeown sound typically unhinged and chord shredding as ever, the punk aesthetic of the band has always resonated in the mixing and production of Josh’s vocal ability as they are never too cleanly recorded, scrubbed and polished so that the listener can enjoy the raw power that they possess. The frantic guitars also go by the same ethos. The musicianship is excellent and well written, but the band do not waste time cutting and pasting and dissecting the track with pro tools, rather they record them to sound as a little rough-around-the-edges and undiluted, which is to be applauded. The clean chorus is as big of a hook as you are likely to hear this year and sounds somewhat familiar to the late, great The Dillinger Escape Plan (which is NEVER a bad thing). This is the perfect way for Palm Reader to reintroduce them to the world.

Palm Reader have never been a band known for pulling punches, and this is apparent throughout the duration of Braille. The song Internal Winter has the kind of disgustingly dirty guitar tone that wouldn’t have been out of place in a 90’s grunge song. The feedback hisses through the amps and leads perfectly into the heavy, stomping riff that guides the song so well. Once again the chorus here is colossal; it is rare to hear a band embrace the melodic elements of the metalcore genre without dipping in to the ‘sickly sweet’ realms when it comes to writing the chorus, and these boys have definitely found the right blend of abrasive and smooth with the hook on this track.

The drum work from Dan Olds is the glue that holds the impressive song structures and instrumental melodies together. The drums switch between complex, hugely technical metal beats and intense, driving punk beats that are sure to whip up a frenzy in pits all over the globe, and that is no more apparent than in these early few songs.

As the album progresses we are treated to something entirely different. Inertia builds the tension gradually with the easier pace of the rhythm section and the reverb-drenched, echoed guitar passages. It has to be said that post-metal stylings such as this and the interludes later on in the album – Breach and Dorothy – really suit Palm Reader well and a gradual increase in tracks of this fashion would not go amiss on future releases.

The back end of the album shows no dip in the high levels of quality. Coalesce hits you like a right hook from Anthony Joshua himself with its ferocious vocal lines. The brutal, guttural backing vocals add an extra layer to the already visceral vocal lines and prove that Palm Reader can indeed throw down with the best of them. This all happens before the reigns get pulled well and truly back, and we get thrown back in to another post metal section that wouldn’t sound out of place on a release by fellow Brits Landscapes or More Than Life. The shift in dynamic is a stroke of genius as the off-kilter song structure provides the kind of intrigue that is simply not on display with most modern heavy bands, who stick to the tried and true ‘verse, chorus, verse’ method.

Overall it has to be said that this album is a tremendous success and further cements Palm Reader’s status as one of Britain’s finest young hopes when it comes to metal-infused hardcore music. What is more apparent on Braille than has been on their previous releases is the experimentation that we are seeing this time around. Sure, they have delved in to the atmospheric side of their sound before but it was merely dipping a toe in the water on the previous two releases, whereas this time they have cannon-balled straight into the deep end with fantastic results.

This is a band that work their backsides off and have done for long enough now that they deserve a great deal of credit and applause. It is safe to say that being armed with the high level of quality with Braille should be enough to propel them to where they deserve to be.

For Fans Of: Employed To Serve, While She Sleeps, Polar

VIDEO NEWS: Thousand Below Release ‘The Love You Let Too Close’