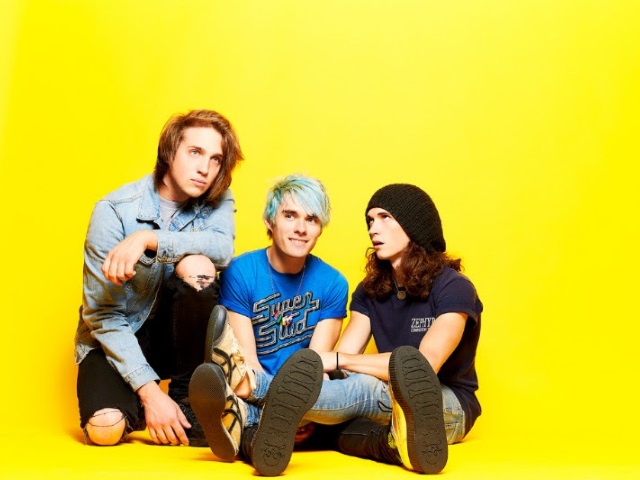 Pop punk is revered by many as a perfect mould of rock music and pop sensibilities, and on the flip side of it people shun the idea that punk and pop can coexist in any way, shape or form. The other issue that many have with the genre is that it is very over saturated, with lots of bands seemingly sounding very similar to each other and not bringing too much originality to the table. As a result it takes a band that has that extra ‘something’ to raise their head above the crowd, and catch the eye of the masses rather than fall by the wayside.

Fortunately, Waterparks have this.

Whilst their previous effort Double Dare did its job in getting people’s attention, it did little to project the boys into the mainstream in this country. The songs were above average, but there was nothing that we hadn’t seen before. Thankfully this is not the case with their latest, rather aptly named release; Entertainment.

The album opens with 11:11 which sets the tone perfectly with its synth introduction, distorted guitars and gargantuan vocal hooks which includes a chorus that is so sickly-sweet that it could rot the teeth right out of your mouth. This song is everything you could want when introducing a new chapter for your band. It’s short, punchy and incredibly catchy, giving the impression that boys are picking up where they left off on their previous album but with a greater experience and increased artistic vision.

This is followed up by the album’s lead single Blonde, which we have no doubt would have even the most miserable music fan tapping their feet and singing along. The uplifting chord progression blends perfectly with the vocal melody and upbeat drum patterns and creates a fantastic slice of pop rock. Another key element of this song is the performance from vocalist/guitarist Awsten Knight, who manages to squeeze as many words into the verses of Blonde that Quentin Tarantino does in his films. What is most amazing about this is the fact that the melody and clarity of what is being put on display here does not suffer.

The album continues to provide high quality songs as the fun and infections grooves of Peach (Lobotomy) and the almost Taylor Swift-esque verses on We Need To Talk (honestly, now that we have mentioned that you will not be able to unhear it).

The track Not Warriors throws in another curve ball with its heavily electronic influences. The style of the song itself would not be out of place on Matt Skiba’s side project Heaven‘s Patent Pending, and also boast the kind of prowess when it comes to writing clever lyrics as the man himself. Once again, the chorus has the potential to become a real ear worm to those who hear it, and we have no doubt that it will become a staple in the Waterparks live set for the foreseeable future.

Next up the boys drop the pace with the song Lucky People, which is an out and out love song. For the majority the song is stripped right back, and delivers the kind of romantic lyricism that you would expect from a group such as McFly or Busted. Once again this song gives off the impression that it will be a major part of the Waterparks live experience in the future and will most probably garner plenty of airtime on both the radio and the music television channels over the forthcoming months.

The album continues to throw out strong poppy rock tunes with Rare, which sounds vaguely reminiscent of some of the earlier You Me At Six songs. This one is nothing that we haven’t heard before: a simple verse, chorus, verse format and basic power chord guitar playing won’t be enough to sway the more sceptical music fans, but it serves as a decent filler track and helps to keep the party rolling on.

The track TANTRUM is another pleasant surprise and is the closest to an aggressive rock song that you will find on Entertainment, with Knight throwing in a raspy edge to his usual high pitched vocal style. We would love to hear the band explore this avenue more in the future releases, because we feel that this is where they really thrive and produce their best music.

This album is not without fault, and unfortunately our main issue is one that is far too common in modern music nowadays: autotune. Now, it’s safe to say that Awsten has an instantly recognisable voice, which serves as a very strong weapon in the overall arsenal that Waterparks have at their disposal. This makes the relentless insistence on using autotune even more baffling. Pair that in with the overly clean and compressed production on the album and sacrifice any trace of rawness and edge that would be found otherwise.

For Fans Of: Motion City Soundtrack, Twenty One Pilots, With Confidence