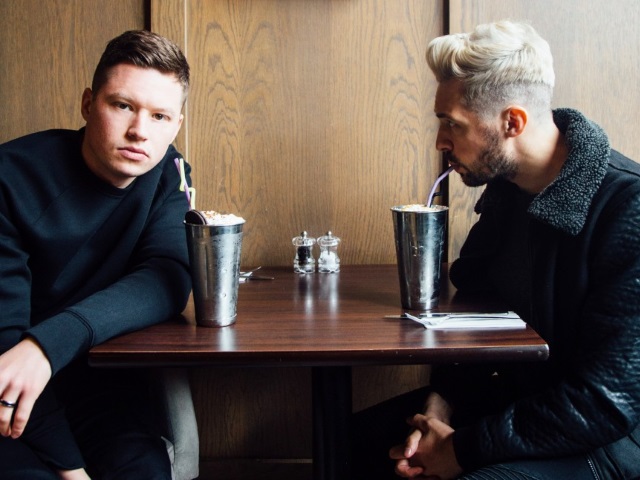 We caught up with Glaswegian indie rockers and sibling duo Saint PHNX following their set at Reading Festival to talk about their experience over the weekend, what they would do if they were King for a day and perhaps most importantly how the band came about (we’re still not sure whose story we believe…)

So you’ve just come off the Festival Republic stage, but what does Reading & Leeds Festival mean to Saint PHNX?

Stevie: It’s an honour and  a priviledge to be playing such a big and prestigious festival in the UK, and for us to be asked to play it is amazing.

Because you’ve only released what, four singles?

S: Yeah, so to be on an amazing stage, get the crowd reaction – the numbers in the tent was nuts.

Alan: It’s a great line-up as well. To be on the same line-up as Kasabian, Bastille, people we look up to and aspire to, it’s good to be joining them.

That was our next question, are any of your idols playing this weekend?

A: We love X Ambassadors, we love Liam Gallagher, Kasabian, Eminem, we like Muse they’re great. We caught a bit of Liam Gallagher, we’ve been quite busy to’ing and frow’ing, and it’s a great thing to be backstage and seeing people just acting normal!

So you two are brothers, can that be quite testing?

S: Yes. We fall out quite a lot, because when you’re in a band you’ve got opinions…

A: There’s a barrier, you can’t really say something to somebody if they’re a friend. This is no holds barred.

Surely that must work in your favour sometimes too?

S: Yeah it does, I think one thing that we’ve noticed is that I think it’s why people like the band and we’re getting fans, because people relate to it. It’s a real thing, we’re two brothers and they can see the chemistry. I think people engage with that.

Have you grown up in a musical background?

S: [laughs – to Alan] I taught you everything you know.

A: Basically, Stevie started off playing drums and he was terrible, so I had to jump on and show him how to play them. He realised he wasn’t good enough to play drums so he went onto guitar and singing.

S: Do you want the true story? What happened is, I did a lot of music: guitar, bass, drums, keys when I was a kid and our mum said, “you need to give Alan a job to do something,” so I said “fine, he can play drums” – that’s basically how it happened.

We’re not sure who we believe.

S: True story! I can give you my mum’s number and you can ring her.

So one of your biggest hits is King, but if you could be King for a day what would you do?

A: [laughs – to Stevie] I would chop off your head!

S: If I was King for a day I would invest in Glasgow Rangers football club.

You’ve recently announced a UK/European tour. We can safely say that you put on a great life performance, but in your own words how would you sum up a Saint PHNX show?

So we touched upon the four singles earlier, are you working on an album?

S: Yes, we’re almost done. We’ve got a lot of good material that we’ve taken to the studio, and we’re releasing a single just in time for the tour.

S: It’s got to be a stadium band for me, because I like big, stadium anthems. Big, stadium bangers. I would love to hear U2, Streets Have No Name, Born To Run by Bruce Springsteen. So yeah, a big stadium band like that.

Great choices. Thanks for taking the time to chat to us guys, catch you again soon.

See Saint PHNX live at one of the following dates:

VIDEO NEWS: Watch The Hunna Perform On Dr Marten Stand For Something Tour