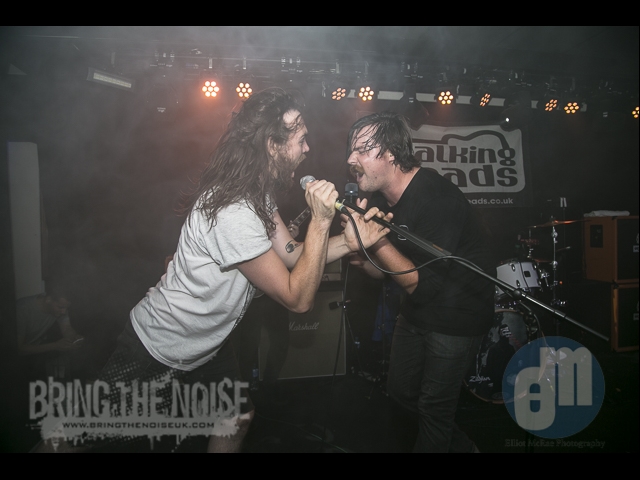 Arguably two of the most hyped underground artists in the UK right now, Black Peaks and HECK have done the decent thing and embarked upon a co-headline tour. We caught them at Edinburgh’s Electric Circus to see what the fuss was all about.

First on are London three-piece Bad Sign. With the venue already fairly busy, they play a raucous set that shows off their powerful combination of stupidly heavy riffs and post-hardcore emoting. Propelled by a rhythm section comprised of drummer Kevin Miller and vocalist/bassist Joe Appleford, the thick grooves of tracks like Rebuild go down well with this Saturday night crowd. While occasionally it feels like tight songwriting is sacrificed in favour of these riff heavy sections, it is difficult to find very much negative to say about what is a very convincing set, and with two thirds of the band rounding things off in the middle of the dancefloor, it whets the appetite well for what’s to come.

Having gained a reputation as ‘The UK’s Most Dangerous Live Band’ since bursting onto the scene a few years ago, HECK have been dismissed by many for not having any real songs to back up their notorious live show. That all changed with the release of debut album Instructions, and despite the media buzz that once surrounded them dying down a little in recent times, this appears to suit the band and their fans just fine. Before HECK have even played a note, a chasm opens up within the throng gathered, and from here, things get just a little silly. Mics (and their stands) are thrown to the floor with guitarists/vocalists Jonny Hall and Matt Reynolds hot on their heels, and as noisy and unhinged as it all is, there’s method in the madness of tracks such as Good As Dead and The Breakers. HECK have often been met solely with wide eyed bewilderment and terror in the past, but tonight there’s just as many headbanging and singing every word – they may not be to everyone’s taste, but the sense of genuine excitement, danger and above all fun that precedes them is both novel and palpable.

At this point, you’d be forgiven for thinking that the evening had reached its climax, however, this is no ordinary night, and Black Peaks are no ordinary band.

Opening with the crushing White Eyes, you’d think a much bigger artist was playing here tonight as those in attendance roar its chorus back in their faces. Having only just released their debut album Statues earlier this year, it speaks volumes of its quality that each and every moment feels like something from an established band’s greatest hits set. From the burgeoning rush of Set In Stone to the epic Drones, Black Peaks fail to put a foot wrong throughout the evening. At the centre of this is vocalist Will Gardner; weird, piercing shrieks, hardcoresque shouts and stunning melodic vocals are all comfortably in his repertoire, and his presence as a frontman elevates the band from something great to something totally unique. Closer Glass Built Castles is the true highlight however, seeing maximum crowd participation as it reaches its sludgy, neck snapping conclusion.

Much like HECK before them, Black Peaks feel like a force for change in the underground circuit – all too often shows of this size are arms folded, po-faced affairs, but with a pairing as white hot as this, it’s no surprise that the room is packed out and raring to go. HECK are clearly suited to chaos on this scale, but it’s easy to imagine Black Peaks playing shows to audiences double or even triple this size, and judging by the response from tonight’s audience, you probably won’t have long to wait.