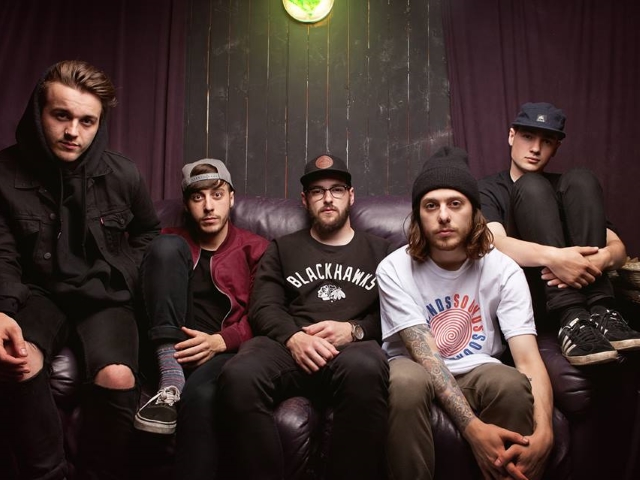 Boston Manor are rapidly becoming one of the most exciting bands in the British pop-punk scene. Ahead of their set at Slam Dunk Midlands we sat down with vocalist Henry Cox and guitarist Mike Cunniff to find out just how this experience is for them.

Hey guys, this is the second day of Slam Dunk weekend how are you feeling about it so far?

Mike: A bit hungover today. We’re feeling a bit nervous about our voices and stuff. Trying to get over it and stuff other than that can’t wait to play, it’s going to be sick. We’ve never played outside at Slam Dunk so that’ll be great!

At least the weather is nice for the Midlands crowd today!

H: Yeah I was expecting rain.

M: I’m glad it’s sunny, especially for outside as it means people can actually see us and hopefully watch us.

Your EP Saudade was released in November, it means a feeling of longing, melancholy or nostalgia but what are you longing for, for the band?

H: Just to keep doing what we’re doing really. To progress and play new places and write new songs and get more experiences like we’ve already had.

M: Yeah and hang out with my best friends playing music.

Would you say your musical influences have inspired your current sound?

H: A little bit. It’s always going to be a musical bedrock and a foundation of a band’s sound.

You’re currently working on your debut album, could you find five words to sum up what fans can expect from it?

That’s cheating but we’ll let you have that one as we’re in a good mood. You’ve got a great live history playing with some pretty big bands in the past and you’re playing with Four Year Strong in London on Tuesday. How excited are you for that show?

M: Really excited, I used to love, I mean I still do love Four Year Strong but 2010 I think when they were in their prime. To think that we’d actually get to do a show with them a few years down the line is crazy. It’s gonna be great to do that when I love watching them and just seeing them play.

H: And at Underworld!

M: Underworld is always a really good show so it’s going to be fun.

You’ve also got the Moose Blood tour later on in the year, we guessing you’re just as excited as us about the whole thing?

M: I cannot wait for that, they’re some of our best friends as well so we’re excited to just hang out with them every day and the shows are a bigger step up for us as well. Like over 1000 cap which we’ve never played venues that big before so it’s gonna be good to see how we cope in those situations as well. It’s going to be a good learning curve and it’s going to be good to hang out with our mates.

Not so long ago you had some visa issues meaning you couldn’t go over to the US, have you got any plans to go out there if you can get the issues sorted out?

M: We’ll definitely get visas sorted out and stuff for next time. We’ve been speaking to our label and agent and they want to get us out there as soon as possible and like for a long time and stuff.

M: End of summer, fall or something. Maybe after the Moose Blood tour.

In Peach State, you sing “Why do you keep testing me?” but what do you think has been the biggest challenge for you within the band?

H: Good question! Personally, for me, vocal stamina is a big thing. I psych myself out a lot, it’s more of a mental thing. I have a lot of anxiety issues so that’s a big hurdle to climb but we’re almost getting there now. As a band, I don’t know. It sounds a bit cliché but we’ve always felt like the underdogs, we’ve never been a hype band. It’s always been a natural sort of evolution kind of moving forward, we haven’t had any really, we’ve not just been slapped in the middle and I think that’s actually a good thing really. We’ve not been put on any big stage too early and I wouldn’t want that to happen. I think that, I feel like we’ve been underestimated for a long time and people kind of didn’t give us the opportunities we wanted in certain aspects and we want to prove ourselves but sometimes we don’t get the chance.

M: I think we’re getting there. It’s just been up and down. We get something great and then get like knocked down like that American tour. Stuff like that can be quite damaging to the band as we were like all so excited then like ‘what do we do now?’. We always stick together when stuff like that happens and we’re going to go to America and whatever, we’re going to do these things.

H: Roll with the punches!

If you had to sum up your time in Boston Manor with one of your own lyrics, what would it be and why?

H: I like Boston Manor, even though most our lyrics are pretty miserable so erm…

H: “Don’t drive me home again” I like being on tour.

M: Yeah that one!

What can fans expect in the coming months from Boston Manor?

M: Music videos! Another single will come out in August and the album sometime in September is the plan.

M: Maybe two singles before the album drops, album, tours, new merch. I don’t know what else, that’s kind of like the cycle.

H: We’ve got some cool stuff planned, some stuff yet to be announced and some stuff still working itself out.

Thank you for your time guys and enjoy the rest of your weekend!