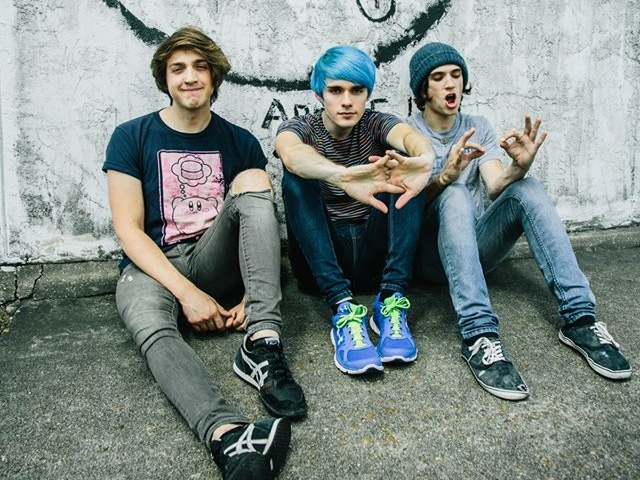 Just in time for the sun to peer out from behind the clouds, summer’s well and truly arrived in the form of Waterparks’ brand new EP Cluster. We’re reluctant to overuse the word sunny, but we defy you to listen to these five tracks without dreaming about donning your favourite shorts, grabbing your skateboard, or rushing to your local waterside with an ice cream.

Crave kicks off with the charging chords of Green Day and effected vocals; think an electronically altered sound that verges on the spoken word and squeaky, chipmunk, synth noises… sounds strange but it works. With a fantastic chorus to boot and the “I wish I could forget you” hook, there’s nothing not to like about this song if pop-punk’s what you’re in to.

A far groovier affair, Territory starts with twinkling guitars before crashing in to a sweet chorus, upbeat drums and irresistibly, quintessentially American pop-punk vocals. From the “woah-ohs” and the building keyboard intro to the comparatively quiet middle eight and mini drop, all the boxes are ticked for an alternative summer anthem.  Mad All The Time begins far slower and isn’t as instantly catchy but with snares, isolated vocals and another powerful hook in its midst, it’s another solid effort.

Consequentially, Pink is a little dull in comparison; that is until the powerful synths and electronic effects come in to action, before disappearing as quickly as they arrived. Space-age electronics take centre stage at the start of No Capes, speedily descending in to an exciting closer that’s equal parts positivity and melancholy and major and minor notes, but 100% brilliant.

Waterparks are dipping their toes in the UK water this season with a couple of festival appearances on their to-do list, but it won’t be long until they become a household name within the genre and a band you’ll want to pay attention to. This EP’s a scorcher.

For fans of: State Champs, Five Seconds of Summer, The Starting Line