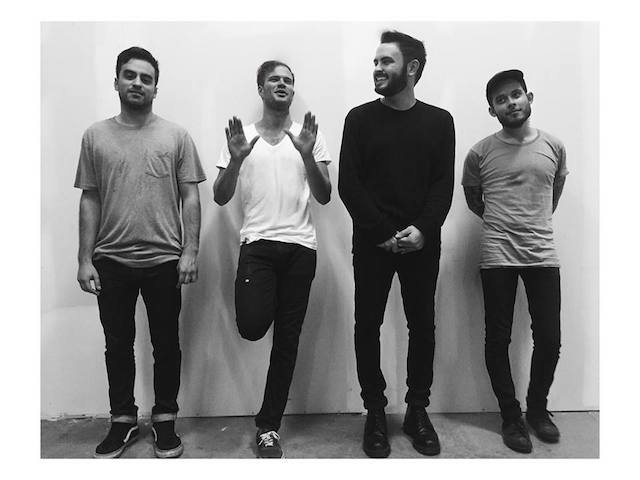 Pure Noise Records is very much known for its heavily pop-punk influenced roster, with everyone from The Story So Far and Four Year Strong, to State Champs and Seaway leading the pack. One of it’s latest additions however, is offering something a little different to the sunshine punk jams that often fill its releases. New Jersey punks Can’t Swim are here to make some noise, and there’s not a pizza slice in sight.

Taking elements of Have Mercy, letlive. and Balance and Composure, the quartet’s debut EP Death Deserves a Name is an adrenaline fuelled, lyrically dark and deliciously haunting affair. Opener, and lead single Your Clothes kicks things into gear with a pulsating bassline, Chris ‘Krier’ Oporto’s vocals enticing you in, like when you know something is dangerous but you can’t help but feel intrigued as to what lies ahead. At just over two minutes in length, it’s a short burst of anger and energy, with words that bite, such as: “Put your mouth right on mine / I want to prove that I’m a total waste of all your time.” and “I don’t want this / Take it away from me.” The words claw at you, with the desperation in Krier’s voice almost too much to bare.

From then on, things are a little calmer. Come Home and Right Choice lean closer towards emo influences, grungey guitars and a gentler melody allow these two to float by. Though not the highlights of the EP, they’re great additions which show Can’t Swim as more than a one-trick pony.

Way It Was injects a more hateful tone, Krier’s vocals gritty and rough, though not too harsh on the ear and they accompany the bouncing rhythms perfectly. The track really nails the hit-you-in-the-feels lyrics with just hints of hardcore and emo flowing throughout. Title track Death Deserves a Name, is, unlike what it may suggest, the least offensive track of them all. Echoing, harmonious vocals layer upon the softer guitars, the track gradually drifting out to the end of the EP.

For a debut record, this is an incredible effort from Can’t Swim. Within five songs they’ve managed to reveal several sides to their musical ability and drenched each track in emotion – allowing the listener deep into their soul. If this is a sign of things to come, we can all expect to be taken for a ride in the future, and it won’t be a safe one.

Standout Tracks: Your Clothes, Way It Was

For Fans Of: Have Mercy, letlive., Balance and Composure