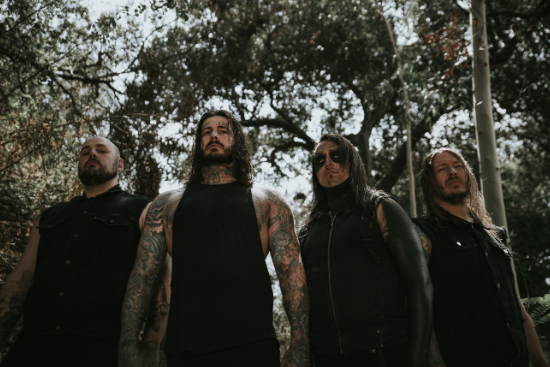 “This is another perspective on the poison that is religion. Rather than directly attack the current church, I looked back on history to the Salem Witch Trials,” explains vocalist Ricky Hoover. “That was a time when Christianity persecuted others, while its believers either picked up their torches at worst or turned a blind eye at best – a pretty terrible best-case scenario. This is a scenario that has repeated itself throughout history during slaughters such as the Crusades and the Spanish Inquisition. Our video is more a fantasy world where the witches get their revenge. After one and her baby are burned alive, she and her friends come back to enact some sweet justice.”

Guitarist/vocalist Chase Wilson adds, “After the full-on brutal attack of ‘Stained in Rot’, here’s a song with…ZERO BLAST BEATS! Don’t worry, though, the song kicks in HARD with a churning war march and only lets up for our best melodic hooks yet. In fact, hearing the unfinished version of this track is what really opened our eyes to how diverse Ricky’s vocals were – not just in screaming but also singing. Wait until you hear the bridge!”

The aesthetic director and responsible for make-up and wardrobe was MM Fabrications and the video was filmed and edited by Vicente Cordero.

Like what you hear? Death Ov Circumstance is available to stream/download HERE.