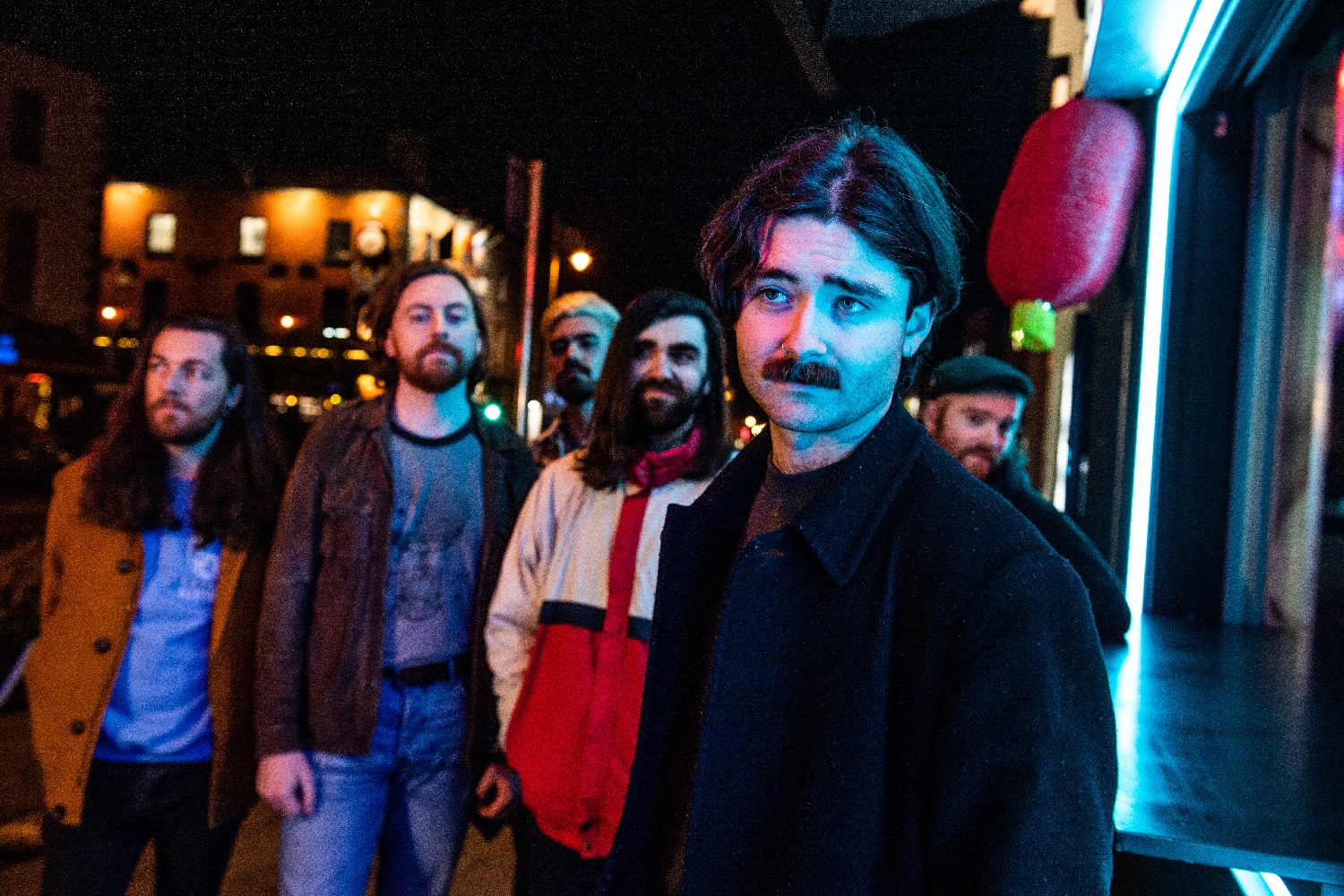 THUMPER are one of a whole host of talented bands that hail from Dublin. Following in the modern footsteps of Fontaines D.C. and The Murder Capital, and inspired by Dublin’s creative hub, THUMPER are trying to bring an exciting brand of chaotic yet thoughtful music to the ears of many. Following the release of their debut Delusions of Grandeur, we spoke to lead singer Oisín Furlong and guitarist Alan Dooley about the band’s gradual rise.

How was your Leeds set today?

Alan: Yeah, it was great. We were the first band on and a lot of people showed up which we really appreciated, and we got a little mosh towards the end which is always good.

12pm on Sunday is a bit of a tricky slot so fair play – is it your first-time playing Leeds?

Oisín: Leeds Festival yeah, but we played Live in Leeds last year, and we’ve done some shows in Leeds. We always really enjoy it. We’ve played some shows in the UK and we’ve been on tour pretty much all summer so playing to a Sunday crowd, they are our people. They’re exhausted, they are emotionally distraught, but they are enthusiastic.

So, for readers who haven’t seen you guys live, what should people expect from a THUMPER live show?

O: It is chaotic but also sensitive, much like ourselves, and that’s what we want to share with people. Some chaos, but not necessarily danger.

Is that how you would describe your sound as well?

A: It’s a terrifying wall of sound but buried deep within it is little nuggets of lovely songs, if you can find them – good luck.

O: Our press release says that we are like ABBA versus Sonic Youth and what we mean by that is that we enjoy both extremes. We’re all really into songwriting as an art form, songcraft, and we spend a lot of time working on that in earnest. We are also compelled to bring very loud volume and more of a flow state on stage where potentially anything can happen, but it’s all rooted in melody and harmony.

A: To be honest our booking agent was saying this was a really big deal, this is Reading & Leeds! And I was just like I don’t fucking know.

Are you not much of a festival guy?

A: No, I’ve done festivals, it just went under the radar for me. Obviously Nirvana played Leeds Festival and we always enjoy playing to the Leeds crowd. We’re always happy to come down here with no expectations, but the audience brought it so we were more than happy.

Can we push you for an answer to which is better, Reading or Leeds?

Everyone always says that the crowds are better up north, so do you think its just that?

O: I’m just really into all the trees aha, it was just thirty degrees all day and there wasn’t a shadow at all. So we’ll take the trees and the people.

Have you ever heard of the festival 2000trees? The clues in the name with the forest, and the Forest Stage is somewhere we think you guys would love. As you guys are from Dublin, what do you think it is about the city that makes it such a great creative hub for music?

A: Ireland only really has one big city, so a lot of the musicians do all kind of flood there and make a name for themselves. There are good venues, it’s just kind of a boiling point for good music really.

O: We also historically have a culture for creativity, it’s our weapon of choice, we emigrated to other countries our poetry, our culture, our humour, our music, whatever, it’s bled into us at an early age. I think in the last few years a big thing that has been shone on Dublin, but I don’t think it’s one of those things that have been suddenly shone. It’s just suddenly now people are paying attention, because there always has been and always will be beautiful art being made there. The people living there all being influenced by each other, I don’t know if that’s something that’s specific just to Dublin, but certainly that’s what makes it a nice hub.

Is it one of those environments where everyone knows people who are in bands?

A: Yeah honestly, it’s one of those places where everyone’s bands, we all walk around each other’s doors whilst writing.

O: I’ve said this before, but the difference in the scene in Ireland is that the scene’s not necessarily a difference in the musical DNA we all share, it’s more of a creative one where we interpret each other’s influences in different ways, where it goes through the lens of your own experiences. Even though you listen to the same bands, the same hip-hop acts, the same books, the same whatever, it’s your interpretation of it. It just seems to constantly refract in different ways for each band.

A: Touring. We’ve got a tour coming up in September, October, it’s like our album tour.

You guys don’t get breaks by the sounds of things.

O: No, but we’ve been trapped indoors for two years so we don’t give a fuck really. We’re going to do that and put more music out by the end of the year, and then next year we are going to do five hundred thousand million gigs. So that’s the plan if you’re around, come to one of them!

THUMPER‘s debut album Delusions Of Grandeur is out now, available to stream or purchase HERE.

See THUMPER live at one of the following dates: