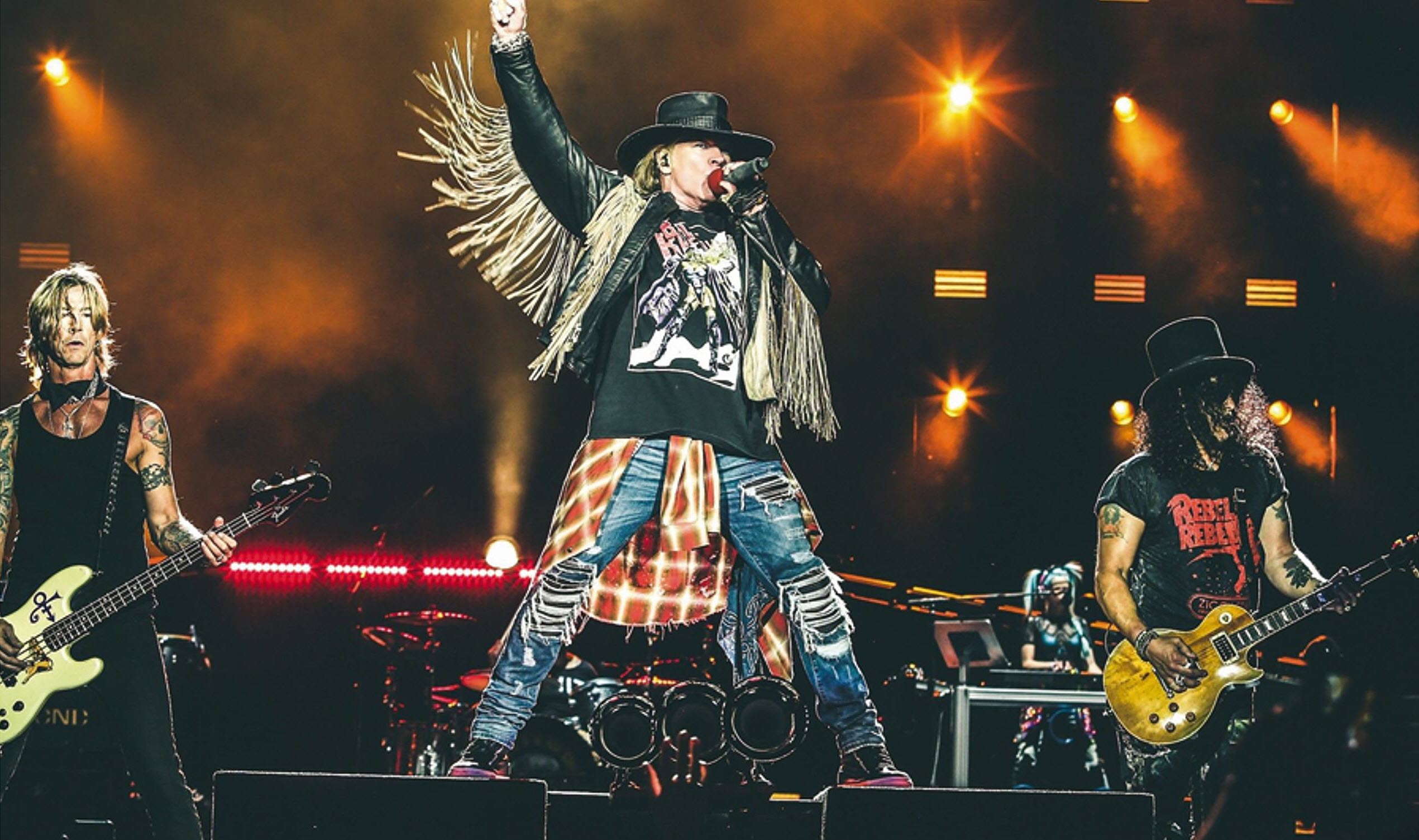 In just 15 days and 15 nights they will return to give us four-dates with the most dangerous band in the world.

The Sunset Strip swaggering, global conquering, generation defining, Guns N’ f*ckin’ Roses will plug in their amps and unleash an expected three-hour set of rock n’ roll royalty, to sell-out crowds in London, Dublin and for me the pièce de résistance, a glorious night under the Scottish skies of Glasgow Green.

I, your humble writer, will be there. As front and centre as I can squeeze myself to witness first hand who are for the greatest rock band in history. It’s been a number of years now and a global behemoth of a world tour with the current line-up, but for me it is still a three-union I never dared to allow myself to dream about. As part of their mammoth European run of shows, Guns are coming across the Atlantic for a four night series of shows in the UK and Ireland. This includes back-to-back events at Tottenham Hotspur’s Stadium in London, a night in Dublin and the aforementioned UK finale on Glasgow Green on 5th July 2022.

Guns N’ Roses’ huge popularity on this side of the pond has helped shape the musical soul of an entire generation, and left deeply ingrained rock horns on the musical hearts and souls of so many.

Like so many rock and metal fans who sprung from their mama’s loins in the ’80’s, I grew up on a healthy staple diet of Guns N’ Roses. First dipping my curious lugs into Appetite For Destruction as a 10-year-old, before fully embracing Illusion-era GNR and the frenetic sh*tstorm which seemed to follow the band in their pomp.

At the time they seemed so dangerous, so combustible and a genuine world class rock n’ roll band, who were dripping in unpredictability as much as star power. Key to that of course was the twin towers of frontman Axl Rose and lead axe-man Slash.

Nowadays, I straddle both worlds as a long-time fan and a working journalist but for me, and many of the friends I grew up with, GNR and a possible reunion of the classic quintet remained at the very top of our wish lists.

Of course when you see the golden trident of Guns N’ Roses reunited you can’t help but feel a little greedy and wish mournfully that classic-era members Izzy Stradlin or Steven Adler were also sitting on the Guns N’ Roses branded plane – fully decorated with the band’s logo and name – which has been circling the globe for the past number of years.

Never-the-less I’m itching to go and fully supportive of Guns’ version 2022 and this summer’s European tour is the ONLY rock n’ roll place to be.

Seeing the interaction and the relaxed, grinning faces of both Axl and Slash on stage during their Not In This Lifetime tour in recent years – a clever tag for a tour even the enigmatic frontman himself vowed would never happen – it is hard to believe that it’s only a few years since the pair vowed never to work together again. Axl and Slash were rock music’s most painful and bitter musical divorce, until the glorious reunion at the Troubadour in 2016.

The speculation looks to be confined to yesterdays now after the pair seemed to have made amends. All eyes were on Coachella and the stage, to see the pair who complimented each other in a way few have before or since. Throughout the first year run of their hugely successful shows in 2016 – they reportedly raked in something like $5.5m PER SHOW – the band have been loud, tight and the rapport has been superb between all members of the band.

Of course it is now in excess of a whopping 20-years since Axl lobbed a P45 at Slash as he walked out the infamous revolving door at GNR HQ, and Axl was subsequently in a band with the likes of Bumblefoot and DJ Ashba LONGER than he was ever with Slash or Izzy Stradlin.

But, despite these facts, the clamour for a classic line-up reunion never seemed to subside. Countless bands have changed their line-ups over the years, but there is no vociferous campaign to reunite, for example, Metallica with Jason Newsted.

This is simply because Guns N’ Roses certainly for me, and it appears for many considering the dozens of dedicated fan sites and forums which remain active to this day, hark back to a golden-era of rock n’ roll. A time when the band on top of the rock world were real, raw, exciting and had a comradeship and chemistry unrivalled across the musical landscape.

Bands today haven’t been able to bottle that unpredictability and power which seemed to come so easily to golden-era Guns.

Since the end of the classic world conquering GNR animal Slash, on the face of it, looks to have fared better than his old pal. From Snakepit to the heady heights of Velvet Revolver, which threatened at times to become huge, and with his solo band which are in top form with Myles Kennedy on the mic.

During the years in the cold with his former pals and classic-era band mates Axl of course did drop one single Guns N’ Roses album, with Chinese Democracy reportedly costing a whopping $13 million.

After such a delay – nearly 15 years – it was inevitable it would never meet the ludicrously high levels of expectations regardless of how good an album it might be.

As it happens Democracy was a really good record, better than the critics would have you believe and with a handful of tracks which wouldn’t be out of place on an earlier Guns’ album with the classic line-up. It even racked up sales into the millions, but it had an impossible legacy in a different era to live up to.

But since the 2008 release there has yet again been a near deathly silence on new music, until the regular ‘coming soon’ posts were replaced with the dropping of two new tracks Absurd and Hard Skool, which have whetted the appetite for the future – and perhaps a full-length album to come as we approach the 14th anniversary of Chinese Democracy.

Taking a stroll down some of the forums on the big UK festival sites, it is easy to see the impressions and feelings the younger rock fans have about Guns N’ Roses.

A generation of music fans had missed out on the pomp of GNR until this noisy and utterly glorious reformation as the band returned to the pinnacle of the musical mountain, with the band on the road and selling out arenas around the globe.

Very few gig-going fans will have seen Axl and Slash live together before their surprise reunion and the pair, alongside Izzy, Duff and Adler, have been elevated to almost mythical status, which feeds the clamour for a reunion somewhere down the line.

To older fans the concept of seeing their heroes plug in and explode onto a live stage just one more time takes them back to what, for many, was the golden-era of their beloved genre, and perhaps to a time when they too were younger and more carefree.

This is why I think the jungle drums never stopped beating with regards to a classic-era reunion. Now they seem to be back, it remains unknown yet for how long, the clamour now will be to lure them to Europe and her plethora of rock festivals this summer and beyond.

For me, a self-confessed Guns N’ Roses fanatic, I am thrilled beyond words they are back on European shores this year and I am crossing all ten fingers and all ten toes they will continue to tour and at least lay down one record of new music.

Appetite For Destruction remains the greatest rock album of all time and to see the men who created that magic take to the stage to unleash their joy over an eager crowd is too good an opportunity to pass up.

Watching Axl snakedance his hips over to share a mic with Slash, while Duff sends his fingers dancing up the fretboards is an image that I can’t wait to enjoy in real life. I can already see the scene as the sun sets and the sky moves from deep sea blue to purple in the Glaswegian sky, while Axl Rose prowls the stage for their first show on Scottish soil in 10 years.

If history is anything to go by, then Guns will continue for anything up to three hours and they will still be playing long into the fading light to an ocean of happy, grinning rock fans – scattered throughout the vast expanses of Glasgow Green.

Standing in a field full of your musical brethren, shoulder to shoulder with your best friend or other half with the sun (hopefully) bearing down on your back, a cold drink in your paw, the other arced skywards in the traditional rock horns shape.

As the gates open to the promised land on 5th July 2022, we will charge onto the turf like an army of paper cup and grin wielding Spartans.

Finding a spot to settle in as the bands plug in and the music … begins.

As the opening bars crank in, the majority of the current 2022 tour has seen the band kick-off the set with the snarling and fast-paced It’s So Easy, a wall of noise rushes forth from the stage like a ravenous beast looking to reclaim its territory.

In the crowd, you begin to stomp your foot, swing your hips, raise your spirits and break into a face splitting smile – Glasgow Green and Guns N’ Roses welcomes us home.

For most of us it passes like a motion-blur, over too quickly but it leaves its musical bootprints on your soul, until the countdown begins for the next visit of the most dangerous band in the world to make another head and heart full of unforgettable memories.

Guns N’ Roses are more than a band, they are king of the pride, and it was long overdue time for them to return to the jungle they welcomed us all into back in 1987.

Now I can’t wait to hear them roar all over again.

See Guns N’ Roses live at one of the following dates: 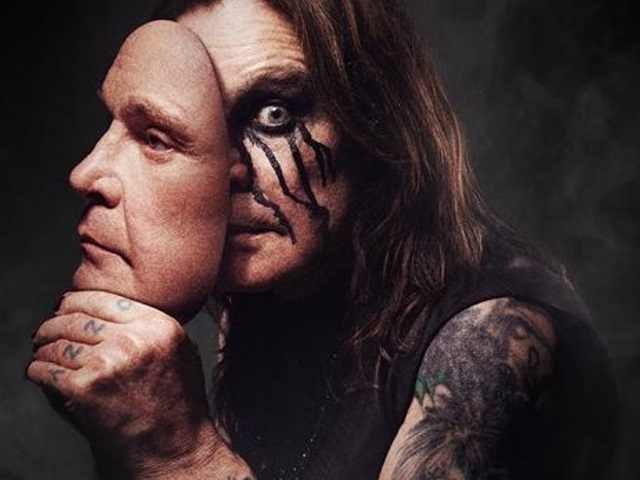 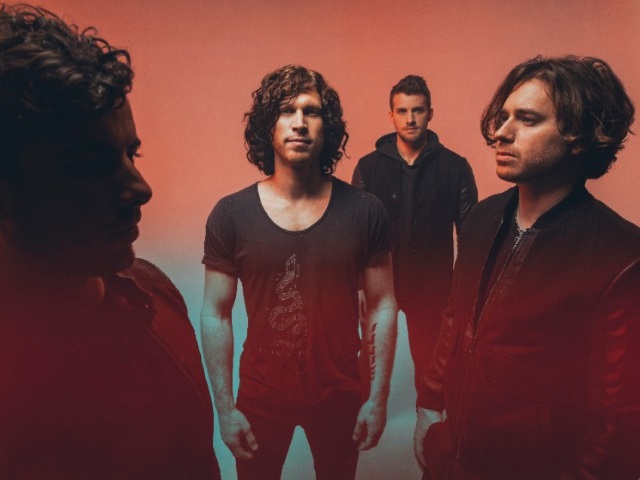