Bring Me The Horizon are a forward-thinking band, driven by sonic development and innovation. Within their first few bodies of work, from debut album Count Your Blessings to fourth full-length Sempiternal, the quintet largely adhered to their bread and butter sound of full throttle screams and heavy guitars, deeply rooted within the metal and rock scene. However, the LP’s and EP’s that were to follow found Bring Me bring musically defying elements into their soundscape. 2015’s That’s The Spirit and the band’s most recent record amo are spearheads of their sound movement, applying an array of styles such as dance, electronica, hip-hop and pop into their fresh contemporary catalogue and more modern, melodic method of making music. Now a short ten months since the Sheffield band’s last EP, Music to Listen to, their colossal nine-track collaborative project POST HUMAN: SURVIVAL HORROR is set to shake up the unpredictable direction Bring Me The Horizon take once more.

The product of enforced months in lockdown during an abnormally disruptive year, POST HUMAN: SURVIVAL HORROR is the first EP in a series of three which are shortly set to drop, starting with the thundering thrash metal number Dear Diary. Making a staggering resurgence, frontman Oli Sykes is back to screaming fury-filled lyrics like “The sky is falling, it’s fucking pouring/I’m going brain-dead, isolated/God is a shithead and we’re his rejects/Traumatised for breakfast, I can’t stomach anymore” throughout the track’s knockout chorus, which captures his frenzied rage in true screamo style, backed by a stampede of explosive riffs for good measure. This career-defining track is heavy Bring Me The Horizon at their best, reminiscent to that of the early days of There Is a Hell… and Suicide Season.

Next up, both track and single number two, is Parasite Eve, which paints a picture of the harsh realities that humanity is struggling to survive in at the moment. “I’ve got a fever, don’t breathe on me/I’m a believer in nobody/Won’t let me leave ’cause I’ve seen something/Hope I don’t sneeze, I don’t *sneeze*” sings Sykes, accurately depicting the war the world is currently fighting against an invisible virus, with the unrelenting power to destroy humanity as we know it. Whilst not directly influenced by the current COVID-19 pandemic wreaking havoc across the globe, there is a scary sense of reality in the song’s lyrics that also address other equally important global-scale issues, including the catastrophic effects of climate change and how human life is destroying that of animals’ lives and their natural habitats. Musically emphasised by an unusually eerie yet euphoric Bulgarian choir, who kick off proceedings for the serious tone of the track, Parasite Eve later unfolds into this mood with hard-hitting electronic distortions and attacking hip-hop beats. This elevates the lyrics to truly hone in on how much of an accurate representation Parasite Eve is to society’s ‘new normal’ outside of our own household formed bubbles.

Like Parasite Eve, Teardrops and Ludens were amongst the first few snippets of POST HUMAN: SURVIVAL HORROR prior to the EP’s release. Teardrops, the fourth and most recent single, heavily tackles the topic of technology addiction, a problem prevalent amongst today’s youth, engrossed in a fast-paced digital universe. This is mirrored in the track’s mind-tripping nu-metal electro fusion, similar to that of Linkin Park‘s early works Hybrid Theory and Meteora. Alongside Sykes’ clean, crisp, yet hurt-filled and painful vocal delivery in the track’s memorable chorus, the frontman pleads: “I’m running outta teardrops, let it hurt till it stops/I can’t keep my grip, I’m slipping away from me/Oh, God, everything is so fucked, but I can’t feel a thing/The emptiness is heavier than you think”. Teardrops is a classic contemporary offering from BMTH, earning its spot as one of the standout singles and even one of the standout songs taken from POST HUMAN… as a whole.

Moving onto lead single Ludens, this song is everything that Bring Me The Horizon represents musically as a band sixteen years into their career. The track encompasses every sound element the five-piece have dabbled in to date, paying homage to the heavier sound synonymous with that of the group’s earlier material, all the way through the newer found experimental nature of their recent records. Whether that be heard throughout Matt Kean’s vibrating bass or Mat Nicholl’s pounding drums, all the way to Lee Malia’s sharp guitar riffs or Jordan Fish’s ear shattering programming, this Death Stranding video game soundtrack takes all of Bring Me’s best talents and throws them into a four minute 40 second run time.

Almost half way down the track-listing is where the collaborative projects come into play. First up is the band’s third single Obey, with fellow Yorkshire born artist Yungblud. This has been a partnership in the pipeline for some time and the final product doesn’t disappoint. Big breakdowns, catchy choruses and fury raged vocals are executed more in the way of shouts and screams from the Sykes and Yungblud pairing, with lyrics detailing controlling government dictatorship and the oppression/suffering felt by ordinary civilians due to higher authority demands. This beast of a tune is truth telling and sets the bar extremely high for the collaborations to follow in its footsteps.

Japanese metallers BABYMETAL bring their own brand of music to next number Kingslayer. A relentless rampage for a solid three minutes or so, the track takes off instantly with a furiously fast-paced tempo that doesn’t take its foot off the gas for a second, as Bring Me bring some electrifying electronics and BABYMETAL bring the heavy metal. Kingslayer is a killer collab from both bands, one guaranteed to get massive mosh-pits opened up with high octane drive and boundless energy levels sustained throughout the song.

The EP also features guest spots from rock outfit Nova Twins and Evanescence‘s Amy Lee. London duo Nova Twins guest on pop-rock track 1×1 which, overall, is a skippable song. Whilst packed full of punchy percussion, courtesy of BMTH’s Nicholls, guitar driven rock riffs from Malia, and an easy listening blend of vocals from Sykes and Nova Twins’ Amy Love, the song simply lacks the power needed to pack an almighty punch, something that songs elsewhere on this EP do more in the way of.

One Day The Only Butterflies Left Will Be In Your Chest As You March To Your Death closes the EP and features vocals led by Evanescence’s co-founder and frontwoman Amy Lee, sending out POST HUMAN: SURVIVAL HORROR on a sweeping ballad. “On the verge of no return, why’d you keep fucking it up?/Don’t wanna have to bury you, but nothing seems to get through your skull/One day the only butterflies left will be in your chest/As you march towards your death, breathing your last breath/I hate to say “I told you so,” but look how the bruises show” sings Lee, whose tranquil tone sets the mood for the remainder of the song. Soon enough, Sykes slides in with some additional words in an attempt to patch up the heartbreak, “Past the point of rescuing, why’d I keep pushing my luck? The hole I wore into your soul has got too big to overlook/One day the only butterflies left will be in our chests/As we march towards our death, breathing our last breath/I thought we had a future, but we ain’t got a chance in hell,” shortly before the vocalists distinct voices unite alongside some swelling instruments for a chorus and climaxing outro.

The four collaborative songs on POST HUMAN: SURVIVAL HORROR steps into infrequent territory for Bring Me The Horizon, without passing by the band’s distinct own brand of experimental arena rock, which is at the core of what they do best, in its further five tracks.

For Fans Of: Architects, Beartooth, Enter Shikari, Lotus Eater, While She Sleeps 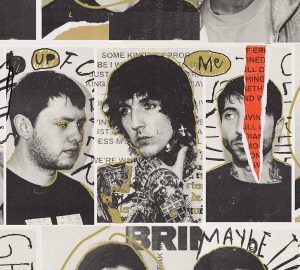