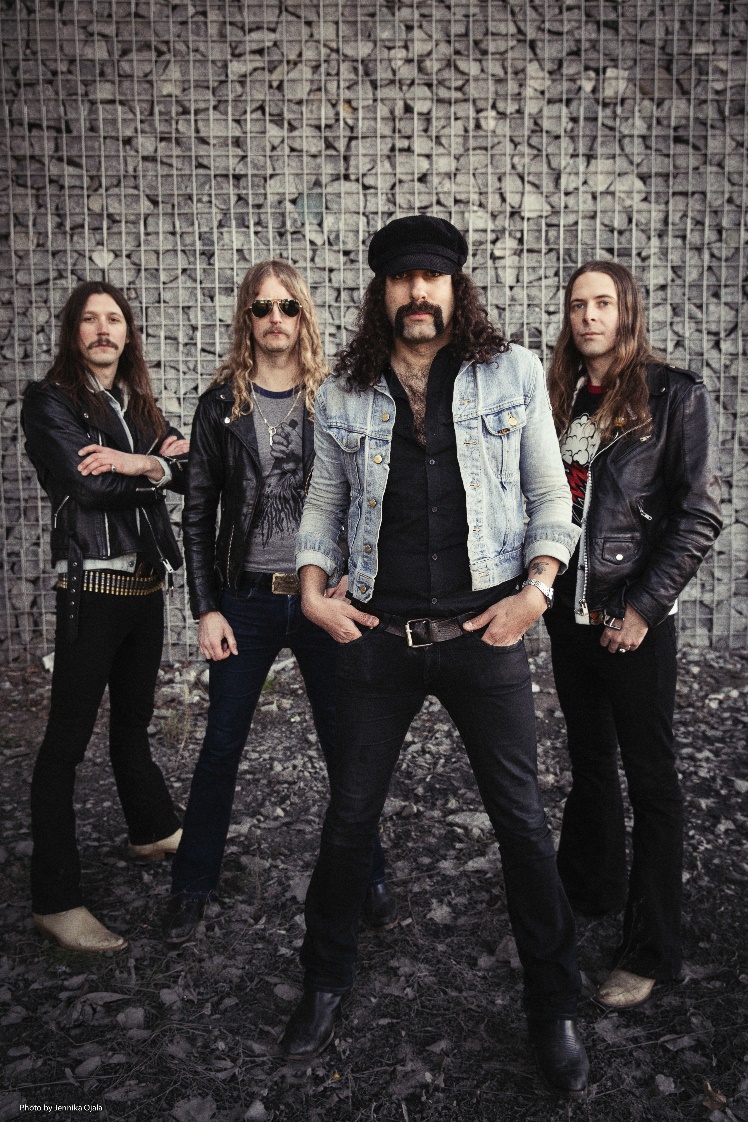 Formed in 2012 in Stockholm, Sweden, rock quartet Dead Lord are back with their new album Surrender, ten-tracks that offer a healthy dose of nostalgia with a modern tinge. We caught up with drummer Adam Linkmark to discuss his first musical memory (or should we say, memories?), Dead Lord‘s influences, total world domination and more.

The humble yours truly of this little tête-a-tête is Adam Lindmark, all-around swell guy and drummer for the rock outfit commonly referred to as Dead Lord. We’re three lovely lil’ lads from Sweden, and one bad-ass kangaroo-fightin’, dingo-devouring knuckle-sandwich-kind-of a man from Australia, who have bonded together in bringing the rock to the world. We’re not the first, we won’t be the last, but by all that is and isn’t holy, we do what we can while we’re here. And we do it goddamn well. Not a face has been left unmelted. Not a jaw has been left in its upright position. Socks have been rocked off so severely that not a sock-drawer on the northern hemisphere is in its fully equipped state.

If you like heart-wrenching, wailing vocals and screaming electric guitar ripe with juicy ferocity, mid-range-madness-guitar and harmonious and angel-like backing vocals, and the mayhem-like pandemonious expression of the animalistic instincts that are the drums, Dead Lord MIGHT just be the band for you!

On a very hungover Sunday in an unknown year of no lord in the beginning of the 2010s, Hakim Krim showed a demo to me, which would later become our first single No Prayers Can Help You Now. Listening to the demo kind of eased the overpowering sense of complete endorphin imbalance, since it was a KICK-ASS demo. A few weeks or months later we had a band, had released a 7”-vinyl and were on our way to Dublin to record our debut album. The rest, as they say, is history.
Since then we have left no stage around Europe vacant, no beer undrunk, no autobahn undriven and no good time forgotten. It’s a legacy, it really is.

Hmm, this is a good question, one not too easy to answer. Was it the time I played along on a plywood guitar replica to the tunes of The Beatles’ She Loves You at the age of six? Was it listening to a mixtape (yes, tape, the kids won’t get it) of Booker T and the MGs in a 1963 Mercedes at the age of nine? Or was it the feeling that overcame me while taking the shrink-wrap of AC/DC’s Powerage on CD on my 12th birthday, and hearing the song Riff Raff for the first time? Who can say for sure?

Other than the ones already mentioned, there’s some Irish rockers that we like. Rory Gallagher is one of them. Another group were around as well, but you probably need to ask your dad about them. Scorpions have great pronunciation in English, that has always been a major influence. UFO had both cool guitar licks and a cool band name, how rare is that, huh? Judas Priest were bad-ass when he was called Bob Halford. They remained cool after the name change as well. Townes Van Zandt writes song directly to my heart, with no detours. Basically, if it has guitars, and a bit of feeling, you can count us in.

Total world domination. My therapist says I’ve got delusions of… something, but I can’t remember what. Anyway, we won’t rest as long as there are people who are un-rocked out there.

For those who are yet to see you live, what can they expect from a Dead Lord show?

Imagine trying to explain to Napoleon about his coming experience at a place called Waterloo. It’s just futile to even try, you’ll have to see if first hand. But contrary to Napoleon, I think you won’t be quite as disappointed.

What’s next for Dead Lord?

Keep going until we meet our own Waterloo. It would be nice to rock in front of people once this gosh-darned pandemic we got on our hands have passed. Other than that, we’re simple folk. Our latest album Surrender rocks hot-shit-balls. You can check that out in the meantime.

See Dead Lord live supporting Lucifer at one of the following dates: