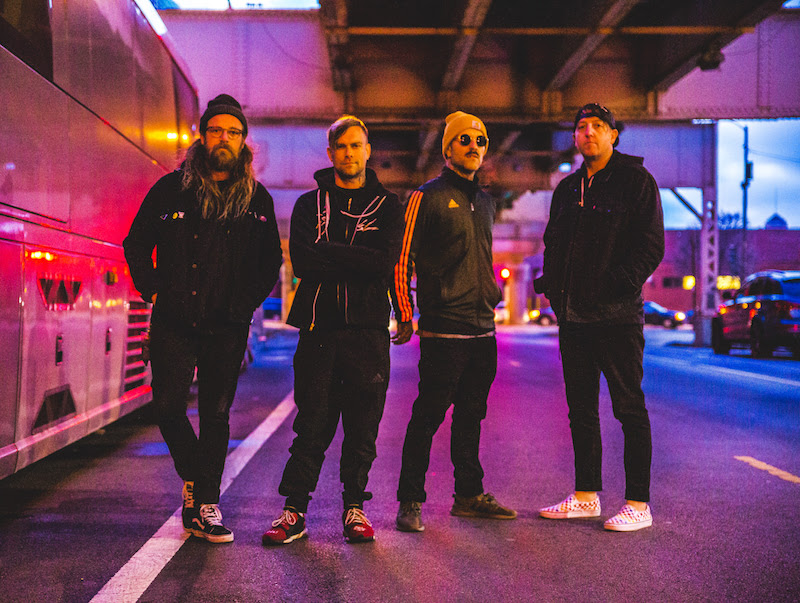 When The Used lit the scene on fire with their self-titled debut album back in 2002, they quickly established themselves as heavyweights. Two years later, In Love and Death followed, catapulting them even further into rockstardom – but more important than the platinum records, high profile tours and hordes of fans, was the sound.

What they brought to the table was frenetic, unhinged and dirty in the best way. Bert McCracken’s way with words and knack for manipulation through his emotional and vocal range wrapped listeners around his finger and after years of creative experimentation and many albums, he’s roping us in for another ride with eighth album, Heartwork.

Along with orchestral elements from third record, Lies for the Liars, Heartwork has borrowed a lot of that raw, unadulterated energy from the first album. And there’s something else their debut and this new release has in common; John Feldmann has made his return as producer.

The first track – centered around a poem by McCracken’s favourite poet, John Milton – Paradise Lost feels like the sum of their discography’s parts. There’s vulnerability and instrumental moments akin to those early albums, but there’s also a driving chorus reminiscent of 2014’s Cry.

Like Paradise Lost, Blow Me has also been previously released, so fans would already know that it’s a fiery track. It’s brimming with promise of mosh pits and stage dives and the energy gets turned all the way to eleven when the very talented, Mr Jason Aalon Butler (letlive, Fever 333 and Pressure Cracks) enters at around two minutes in.

He isn’t the only guest either; Heartwork also features Mark Hoppus, Travis Barker and Caleb Schomo. The latter bringing that renowned brand of angst to The Lottery to create a track simmering in malaise. Everything about it shouts sinister; the guitar work enforcing that sense of mystery with a stabbing riff and an outstanding metalcore breakdown.

Bloody Nose is another standout track that, along with Wow, I Hate This Song, show off an expert blend of light and dark elements. The Used have never been a band to shy away from borrowing elements from other genres, so it doesn’t surprise when choruses sound like stadium anthemic rock tunes or melodies lean into the poppier side of things – an ethos that translates across the entire sixteen-track album.

There are a couple of songs that feel strange at first; Cathedral Bell for one could easily be a Billie Eilish collab, but amid the peculiarity there’s also an element of familiarity. The trick these veterans have seemingly learned, is identifying the kernel that defines them so they’re able to nurture it despite the evolving outer shell. With Heartwork, they lean into everything from RnB (My Cocoon), Muse-esque art rock (1984) to electronic funk (Clean Cut Heals) but somehow, it’s always rooted.

The album’s title track, spoken word over a twinkling beat, feels like a bit of a throwback to In Love and Death’s I’m A Fake, which will no doubt make hardcore fans smile and again marvel at McCracken’s poetic way with words.

Heartwork says goodbye with To Feel Something, which thrives in its simplicity for the first two minutes; the piano and acoustic guitar in the verses elevating the whisper of McCracken’s beautiful voice. The Used wouldn’t be The Used without a curveball, however, and when they pitch it out with an epic electronic buzz and him screaming “I just want to feel something”, they hit a homerun. It feels big, accomplished and evolved – the perfect summary of Heartwork overall.

Experts in their field, it’s not just their mastery of their individual instruments or the lyricism that make them a band thousands of people remain infatuated with after decades, it’s also the fact that every The Used album is always a uniquely cathartic experience that pushes the entire Used family forward on what is always an uncertain journey through life.

Standout Tracks: Paradise Lost, a poem by John Milton, Bloody Nose, The Lottery, To Feel Something

For Fans Of: Sleeping With Sirens, Issues