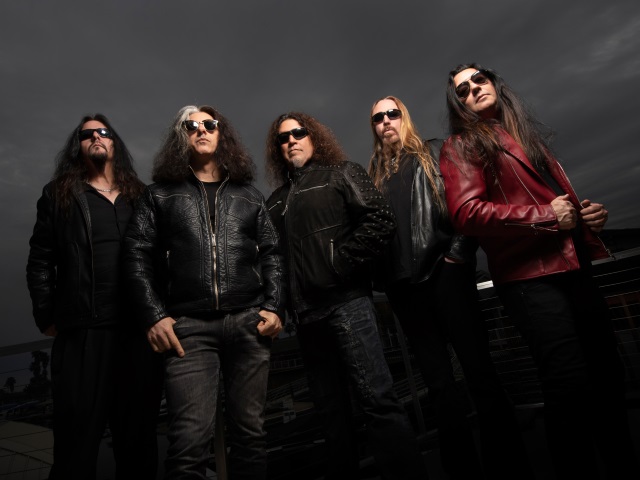 Almost four full years after their last release, 2016’s Brotherhood of the Snake, Bay Area thrash titans Testament return with their latest record: Titans of Creation. With the recent announcement that singer Chuck Billy has been diagnosed with the COVID-19 virus, this brings a new sense of “urgency” and importance to this release. While all of us here at Bring The Noise UK wish him the best of health and a speedy recovery, let us have a listen to their latest offering.

With the unmistakable barrage of riffs and relentless drums that have become part of Testament’s sonic identity, Children of the Next Level launches the album into full throttle mode, with its lyrics centered on the outrageous Heaven’s Gate cult, and its practices and philosophies. WWIII, on the other hand, speaks about the possibility of another World War popping up sometime in the future – let’s hope not, lads! Dreamer Deceiver has a very old school/‘80s thrash sound to it, while pondering on the vulnerability of the human mind while sleeping, and Night of the Witch sees guitarist and founding member Eric Peterson scream in a shrill manner reminiscent of black metal (a first for the group), with the song being inspired by the 2015 horror movie The VVitch: A New England Folktale.

The delightfully mid-tempo City of Angels (“mid tempo”, another new sound for the band) touches on yet another not-so-delighting subject: Los Angeles’ Night Stalker, Richard Ramirez. A great touch here is just how remarkably loud and not buried in the mix Steve DiGeorgio’s bass is, most likely thanks to Andy Sneap’s mixing wizardry. Speaking of which, the next song, Ishtar’s Gate, begins with just that: an isolated bassline, before some oriental-sounding guitar leads set the mood for this track, which talks about the eighth gate to the inner city of Babylon, being dedicated to Ishtar, “a goddess of both love and war, the lion and the star.”

The Alex Skolnick-penned Symptoms is next, with guitar work as complex as its subject matter: mental health, and the importance of acknowledging it. With its staccato opening, False Prophet details the blasphemies of would-be “saviours”, and, on The Healers, Billy tackles the topic of all-natural medicine men. Code of Hammurabi, named after the Babylonian code of law, sees DiGeorgio bust out the wah pedal in the intro, while Curse of Osiris is the second track to feature Peterson’s novel “black metal” screams, backed up by the blast beats and pummeling drums of the Atom Clock himself, Gene Hoglan, and the instrumental Catacombs closes the album with a sprinkling of synthesisers and a choir added in just for good measure.

In the end, Titans of Creation ends up being a more than noteworthy follow-up to Brotherhood of the Snake. It’s unbelievable how a band like Testament still has this massive amount of energy and willpower after almost 40 years of existence. It remains loyal to the roots and sounds that have solidified the thrash metal formula in the ‘80s, it adds exciting new elements to the fold (such as the aforementioned shrill screams courtesy of Eric Peterson), and its subject matter is all the more diverse, which is even reflected in its wonderful album artwork. So, a cheer of “Congratulations” is due for these Bay Area thrashers, for they have smashed it once again. Now, Chuck Billy, please get well ASAP – you’ve got this monstrous album to tour for!

Standout Tracks: Dreamer Deceiver, Children of the Next Level, Ishtars Gate, The Healers