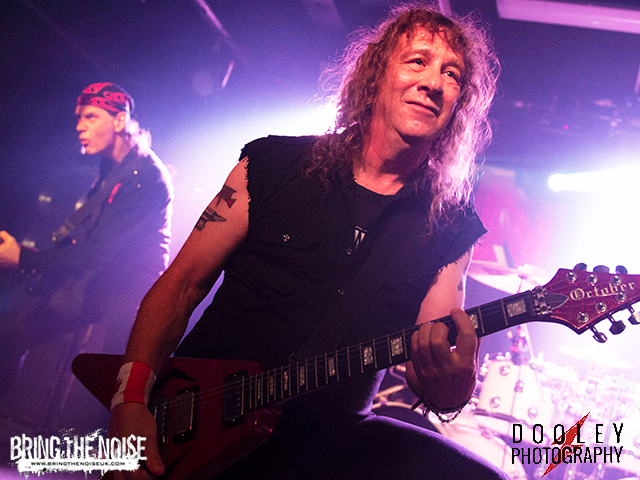 It was only less than a month ago that Anvil released their latest studio album, Legal At Last. After only releasing their previous studio album in 2018, fans haven’t had had to wait long for their next lot of new music, and importantly, a new tour. They have been switching up their support acts throughout their UK tour run, however, at the Manchester show, they were supported by Electus and Ragdoll Sunday.

The first band to take the stage were Electus; from the West Midlands, UK. They are a 3 piece hard rock group who opened with their 2018 single Rider, which didn’t seem to have much of an impact on the small number of people who were there for their set; the frontman’s (Russell Peake) dreadlock–looking wig may have caught more attention than their actual set. As they continued to play a number of their singles and songs from their 2019 album Close Encounters, the crowd began to interact a little bit more with their standard rock and roll style of playing, however, the songs did sound very similar to each other. As they came to the end of their set, they finished with an elongated version of Mountain’s Mississippi Queen which was definitely the highlight of their set; it was played and sang well by Peake and the rest of the band, however, it was not something will stick in our minds. Overall, it was a mediocre set by Electus. 6/10

After a short interval, next to take to the stage were the progressive punk rock band Ragdoll Sunday; there was already a larger audience gathered to watch their set. The audience seemed gripped from the start with their intense and energetic performance of the song What a Day from their 2018 EP Immigrant. The guitarist, in particular, Adonis Adrianos, captured a lot of attention with his creepy mask at the start of the set and his unique style of playing. Compared to Electus, the music and live performance of Ragdoll Sunday seemed to have much more substance and was played with strong emotion, which was displayed through the singer’s (Gaetano) amazing clean and screaming vocals. Gaetano’s amazing clean vocals were displayed on their performance of Animia’s Curse from their 2019 album Puritan, which was definitely a crowd favourite with Adrianos’ tribal chants also impressing. They interacted well with the growing audience, and for a band that have only been together for 3 years, we see Ragdoll Sunday definitely being a band to watch out for in the future. It was a very confident, enjoyable and energetic performance by the 4-piece group. 7.5/10

After the final short break and the venue now nearly full, it was finally time for the mighty Anvil to take the stage. As long-time drummer Robb Reiner and bass player Chris Robertson entered the stage, singer and guitarist Steve Kudlow was nowhere to be seen; however, it didn’t take long until we realised he was actually shredding to March of the Crabs in the middle of the crowd! People instantly engaged with their happiness and lively energy, and this didn’t deteriorate throughout the whole show. As Anvil made their way through the set, they played old classics such as Mothra and Metal on Metal, however, they also played the title song from their latest album Legal at Last, which continued the heaviness and intensity. Between songs, Kudlow would tell stories of Anvil’s past, such as the time they were on tour with Motorhead, which we were certainly happy to listen to.

After an incredible set, Anvil were to finish with a spectacular guitar battle between Kudlow and Robertson which then lead into their final song, This is Thirteen. Kudlow ripped an incredible solo, which was a great set-finisher. All three members then took to the front of the stage, and you could tell that Kudlow, in particular, was especially appreciative to still be performing after quite a tough music career; the smiles did not stop all night.

If you have never seen Anvil, make sure you catch them on their next tour! We are sure it won’t be long until the legends are back on the road. 9/10

Words and photos by: Emily Dooley 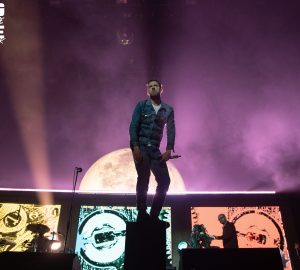