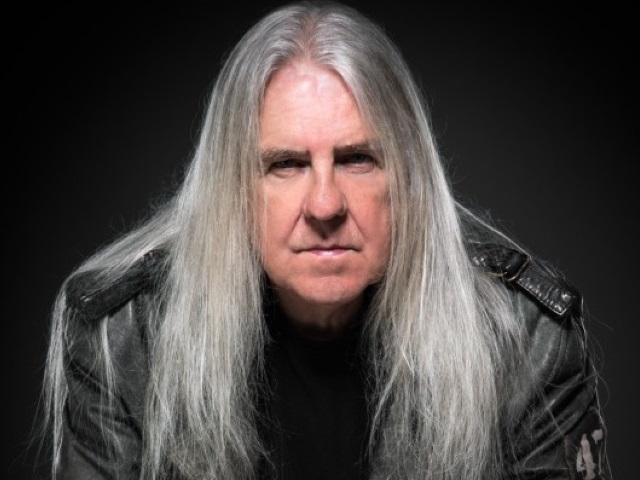 Biff Byford and his band Saxon were one of the first bands to spearhead the ‘New Wave of British Heavy Metal’ movement towards the end of the ‘70s. So what do you do when you’ve been the vocalist of one of the finest heavy metal bands, for over 40 years? You make a solo record, of course! We recently caught up with Biff to talk all about his debut solo album, School of Hard Knocks (you can check out our review of the record HERE).

He greets us with a cheerful “Hello!”, and then we get straight to it. “I rented two rooms in Brighton, at Brighton Electric: a big room and a small room,” he explains of the recording process of the album. “In the big room, we had the band, and in the small room we had a Pro Tools recording setup. We rehearsed the songs, and then we recorded them straight after, so it was a very live, very instant thing.” The “we” in this context means Biff and his solo band, comprised of Fredrik Åkesson of Opeth fame on guitars, Gus Macricostas on bass, and Christian Lundqvist on drums. “Then, I came back home and I did the vocals at my house; it was a very organic album, actually.” Expanding on the sound of the album, he adds: “We only used very old guitars on the album. Most of the guitars and basses we played on are 1968, 1974 instruments, so it has a very retro sound to it. We used a couple of modern guitars on a couple of the shreddy solos.”

We then turned our focus to the tracks Inquisitor and The Pit and the Pendulum. Those of you who are fans of Edgar Allan Poe will probably notice the title is a nod to the writer. In fact, Biff actually recites the first half of the opening paragraph of the story in Inquisitor: “Yes, I read it from the book. A lot of people don’t get it, but obviously you did! [laughs] I think Edgar Allan Poe is the “Charles Dickens of horror stories”. It’s a good subject, especially for prog rock.” So where did the inspiration come from to write the song about Poe’s story? “[It] just came into my head one day, and I had an idea for a Saxon song, The Pit and the Pendulum,” he explains. “Fredrik [Akesson] from Opeth sent me some music and I thought it fitted really well, so I put the two together, and that’s where we came from with this song.” Having said all of that, he also adds that, had it not been on this solo record, it probably would not have found its way on a Saxon album: “It’s a bit more technical than what Saxon play. We do play some proggy stuff but that one’s a little bit more instrumental, I think, than what Saxon would play. So, I think it probably wouldn’t be on a Saxon album, that song, but you never know! [Fredrik] sent me the music, and I liked it, so I wrote the lyrics and the melodies to that style. I don’t think the boys [in Saxon] ever knew that I wanted to do it, if you know what I mean.”

An interesting aspect of the album is that it includes a few guest appearances, including Phil Campbell of Motörhead, Nibbs Carter of Saxon, and others. “I asked some people, but a lot of them were busy, some of them were ill…obviously Phil [Campbell] was always going to play something on the solo album, since he’s a big mate of mine. I could’ve had a lot of people, but I wanted it to be my solo album, not really a “who’s who of rock friends”, so I’m not name-dropping on the album you know. The people who play are seriously good musicians, and they all brought something to the album, which is great,” he says.

One point that Biff wanted to emphasise on was that this is not a Saxon record, by no means. “It’s my solo album, not a Saxon album. There’s no point in writing songs that are like Saxon, because if I do that, then I’m going to record them with Saxon, y’know? There’s quite a nice picture of the styles I like; some softer rock like Tom Petty or Bryan Adams, there’s some prog rock, heavy metal, rock and roll. It’s a very mixed album. There were some songs I didn’t use…there was one about my mother, which was quite a sad song, and a couple of more rock songs, but I chose these songs because I liked them,” he elaborates.

In April and May Biff will be heading out on the road, touring both the UK and select countries in Europe. The show will be split in two parts – a speaking part, where he will be joined by American comedian and That Metal Show host Don Jamieson, followed by a show with his solo band, performing songs off School of Hard Knocks. “He’s a good friend of mine, and he’s a funny guy, we’re just going to be talking about the old days: things that I’ve done, people I’ve met, things that have happened, anecdotes. It’ll be like asking me questions and me telling the stories,” Biff comments on Don’s involvement. “That’s how it’s going to be. The audience can ask questions as well, if they want, but it’s not a Q&A. It’s more of an intimate night with me and Don, in like a talk show format.” Biff’s unique approach to his live show is opening up exciting opportunities for his fans. He muses that the only one that could come close would be Bruce Dickinson’s What Does This Button Do? one-man-show: “I know Bruce does it, but that’s just words, not words and music.”

The European dates will also serve as an experiment of sorts: “We’re waiting to see how it goes. It’s a new concept, so we’re waiting to see if people like it [laughs]. If people do like it, then I’ll do some more. I think we have to be careful – to do a show talking about anecdotes and old days, people have to have a bit of a grasp of the English language for it to work. We’re doing a few shows in Europe, but we don’t know how it’s going to be. Maybe I can go and do a gig without talking in some places, like Poland, Romania, Spain, Italy…they would like this as well, but I don’t think they speak good enough English to understand what I’m saying.”

With just a few minutes to spare, we start to roundup our phone call with ‘The Heavy Metal Bard of the North’, as he is also called. Can we expect any surprises from his solo shows? “The talking element of it will be quite surprising, because we’re going to be talking about things I’ve not talked about before,” he explains. “The show won’t be scripted – we’ll basically decide the night before what we’re going to talk about the day after, so I think that’s where we’re going to play it. Everybody in the band is a Saxon fan, so they’ll be asking questions as well. It’s going to be good fun, I hope [people] come to see it!”

After an insightful conversation with the legendary frontman, it’s great to see his love for both music and his fans is still very much alive. “The whole solo thing is a whole labour of love, and the concept behind the tour is to do something different, rather than just another rock and roll show. So I think people should check out the album and come to the show, it’s going to be great! Maybe I’ll throw in a couple of Saxon songs too!” he adds as his final thoughts.

The possibility of hearing some Saxon songs played in such an intimate setting is one surely not to be missed. We thank Biff for his time, and with a gleeful “See you later, mate, bye-bye!” he’s off.