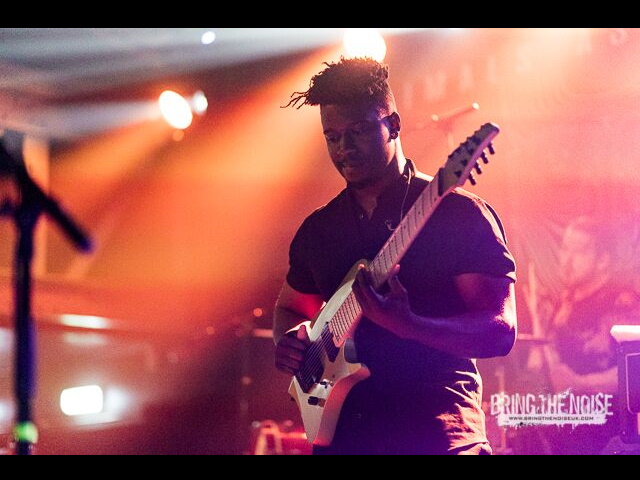 It’s been ten years since Washington D.C trio Animals As Leaders released their self-titled debut album and to celebrate it this they’ve headed out on a 10 year anniversary tour. With support coming from Cryptodira and Rolo Tomassi we knew we couldn’t miss out on this line-up and headed to The Garage show in Glasgow.

It’s tough being an opening band, but when the opener is as good as this it makes it just as tough for the bands who follow them. Cryptodira are a slightly odd mix of Converge’s chaotic hardcore and early-era Opeth’s extreme meets progressive tendencies. That they can throw themselves around this much whilst playing music this intense, technical, and at times beautiful, is borderline astounding. Fans of thoughtful, heavy music should not sleep on this band. 7/10

Rolo Tomassi are one of the most creatively exciting heavy bands in the world right now. Their last two records are superb examples of adventurous aggressive music that is as rich in texture as it is ferocity. The bands live show is much the same, it’s intensely powerful, remarkably impressive and deeply affecting. There are few bands, in any genre, that can create music as visceral and delicate as this and perform with such overwhelming sincerity. 9/10

First things first, obviously Animals As Leaders are an incredibly impressive band. Their ability on their instruments is totally without question. The question is, does ability on the instrument alone make for a compelling live show?

It’s not an easy question to answer. If you’re as much of a museo as the majority of the crowd tonight, the dexterity seems to be enough. The audience are spellbound by the technique on display and they cheer wildly when particularly confusing and confoundingly difficult passages breeze by with ease. It’s a good-natured vibe, one of shared appreciation and ambition and bolstered by occasional breaks of dancing over mosh pits.

The other side to that coin is that visually, this is a relatively boring show. Bar the twitter lights in time with the rhythms, switching from fluid to pulverising at a moments notice, the band are stock-still for almost the entirety of the set. If you’re looking for obvious hooks or audience interactions to hang part of your experience on…you won’t find it here. What this means, is that unless you do know the music inside out, or have enough deep understanding of musical theory, it’s easy to get lost in compositions that are undeniably impressive, but easily forgettable.

It’s a criticism that probably doesn’t carry much weight with the majority the band’s fanbase, they all have that knowledge, but it’s hard to shake that the feeling that there’s a ceiling for this kind of thing, no matter how incredible the players are because that connection live, it just isn’t there. 7/10