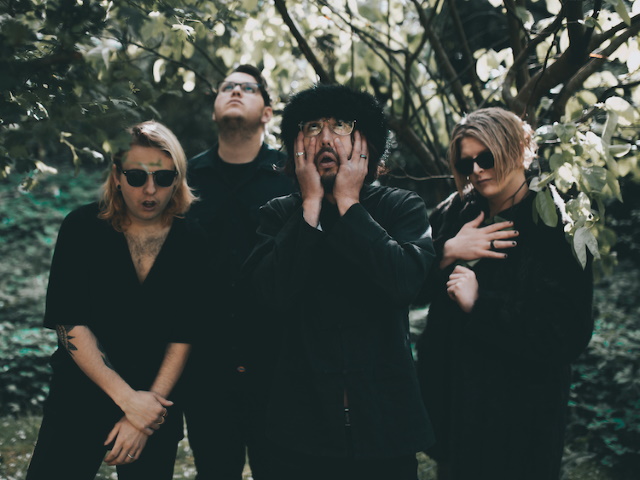 Danny and Kieran from Phoxjaw joined us at 2000Trees after their excellent set on the Neu Stage earlier that day. We talked about festivals, the Bristol music scene, their latest EP A Playground For Sad Adults and their plans for the rest of the year.

Thanks for spending some time with us today. We caught your set earlier, it was great, how did you think it went?

Danny: Yeah, it was fucking brilliant.

Kieran: It’s incredible, this festival. Every time we’ve played (this year and last year), it’s just knocked our expectations out of the park.

What festivals have you played that compare to 2000Trees?

D: We’ve done Burn It Down, no wait, we’re playing that later this year. We did Behave! Festival, that was really cool. Karum (Boneyard Promotions) runs that festival; he’s an incredible musician and an incredible music guy. He’s just a music guy, he’s got it all going on; he plays drums, he plays guitar, he runs festivals and he like, pretty much, dominates the South West and the Devon and Cornwall areas. He’s incredible. You should check out his band Hypophora, they’re amazing.

K: We’ve not really played many festivals that are the same size. We’ve played Amplified Festival, which was like, our first proper festival. It’s a shame that the festival got shut down this year because, Gary is such a lovely bloke and really passionate about music, so it’s a real shame for that to have happened. But I’m sure he’ll return in a blaze of glory.  I did message him on Facebook the other day actually, saying “Look man, I heard about the festival, just so you know I had the best time ever last year and I believe in it so fucking go for it again”.

You guys are from Bristol, how do you find the local scene? it’s very political, very DIY, very artistically driven…

K: I think that’s the thing, it is very political, hence why we stay away from that.

D: Yeah, I don’t think we want Phoxjaw to be that band. We do brush upon a lot of themes, read the lyrics, there’s a lot on those subjects, but we’re not being as direct as bands like IDLES. I want it to be away from that. There are definitely elements of it, but Phoxjaw shows should be about having a beer, having a party.

K: We play these songs to get away from normal life.

You released your new EP quite recently; we’ve seen nothing but positive feedback for it…

K: Yeah, it’s been really surreal. It’s been mad. You never know how it goes. You record these songs over so much time and then you sit on them and you go “Are these the right ones to release?”.

D: We were sort of branching into a different direction and such on this record than we were on the last one and Goodbye Dinosaur went really well, better than we thought it was going to be. When we ended up doing the second record we went at some real different angles, like Bodiesinthewall and a few of the other tracks as well, they’re really different; and it touched some waters that we were like “Ooh, we’ll see how this goes.” But it went better than we thought it would and I think it shows the progressions we’re making artistically are right for our band. We’re going to change every record and it’s going to be really new. I never want to make the same record ever again.

You can notice that from song to song; you can clearly hear different, very different, sounds in each song. We noticed a little bit of Deftones’ influence in one and then in the next song there’s a massive AFI chorus. There’s a range of sounds…

D: We love to hear other people’s thoughts on influences. I’ve definitely got the higher vocal that he (Davey Havok) has.

K: We think and hope that our fans will like what we do and who we are. They come for Phoxjaw, for us, no matter what the song is. That’s what I like to think.

Yeah, you get the press releases and “…they sound like this or this…” There’s no definitive sound that you’ve got; it’s all over the spectrum; there are technical bits, it’s heavy, melodic… Is that something you’ve done consciously or something that happened naturally?

D: I want every record to really surprise people. I come from the prog scene, I love all the prog-rock stuff and I love experimental but I want to make pop music with experimental energy. And I want the instrumentation to be really out there and really bizarre and I also want it to have a 60s, old school, 70s recording thing where it sounds like it’s old and coming out of vintage amps, that sort of thing but then very modern where you’ve got weird, pounding loops. That’s what I would like Phoxjaw to be.

K: Everything; but not done in a really bad way.

Just before we wrap up; are you sticking around for the weekend? Is there anyone you would like to see?

K: I wanted to catch Loathe, but I’m pretty sure they’re on now.

D: They’re great; we love those! They’re the most stylish metal band I’ve ever seen. They like, bring this glam, kind of classic feel to metal and it’s like “Fucking finally, a band is doing that!”.

D: There’s a lot of good stuff going on at this festival, man.

K: While She Sleeps, Cancer Bats.

Finally, you’ve just released the EP, are you back in the studio for a full length, another EP or are you planning on going out touring…?

D: No more EPs unless it’s a collaboration on stuff. The albums, the first two albums will be the thing now. The first album is mostly written and we’ll go in to record it in September and it’s fucking exciting!

K: We’ll hit the studio now and again and mostly plays show now. Now the EP is out and we’ve got some other stuff we’re waiting to announce, now is the time to play as many shows as we can.

That’s great! Thanks so much for spending some time with us today.