MUSIC FEATURE: Jamie Lenman On The Resurgence Of British Post-Hardcore 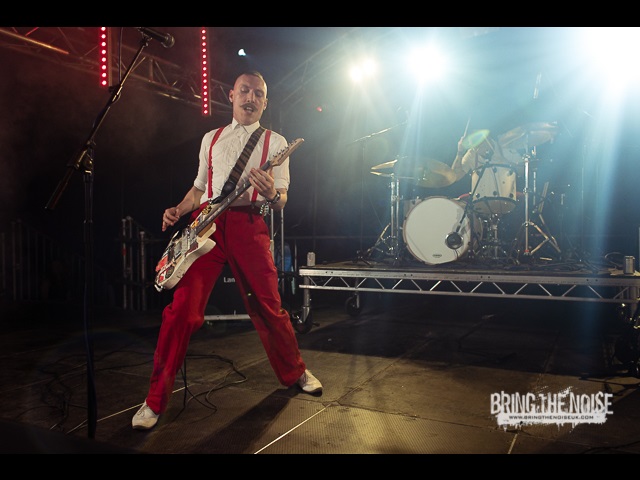 2000trees is something of a spiritual home for Jamie Lenman, a much earlier year of Trees was even set to be headlined by his previous band, Reuben. In 2019 he isn’t headlining the now much larger festival, but he does have his own stage, with a personally curated line-up for the opening day.

Admittedly, that doesn’t come with the same size of backdrop or smoke machines as a main stage headline slot, but it’s still a potent reminder of just how important Lenman, his previous band, and his new solo work is. Though times have moved on, and so has Lenman, his latest work incorporating a lot more pop and electronic influences alongside the punk-infused metallic rock that defined Reuben, there’s a certain spark around the Lenmania stage today that harkens back to the unfairly ignored early 00’s UK rock scene.

Following a hugely well received and attended acoustic set, opening his stage before he headlines it in a much noiser fashion later on, it’s put to Lenman that there’s something about today, and the 2000trees line-up in general, that brings that scene to mind.

“I remember talking to someone else who was talking about that period which we call, for lack of a better term, the golden age of british post-hardcore, which is not my phrase by the way…and to be honest I wasn’t aware at the time how great it was.” Lenman explains.

“It was only after it happened and I almost missed it that I was very proud to be part of it. Someone said to me there’s nothing like that today and I was like ‘dude that’s exactly what I thought at that time.’ I was so immersed in it I couldn’t see it. What the end of that scene taught me, was how to look at the signs.”

It’s hard to argue on this point. Today, the Lenmania stage plays host to a wide range of bands from the metallic roar of Conjurer, the left-field absurdist jitter of Frauds, Orchards‘ vital and exciting dream pop, the almost painfully modern crush of Loathe and the scratchy post-hardcore of False Advertising…it’s an eclectic bill that despite sounding disparate on paper, blends perfectly together.

“So when I started releasing music as a solo artist and plunged into the current scene of what’s happening now….it’s just as vital and creative as it was then, except this time I can appreciate it. “ Lenman continues with an obvious passion for all of the bands playing his stage today, excitedly discussing why he chose each of them and what he loves about them all. It’s more than a little obvious that he’d much rather be watching these kinds of bands than answering questions on why he called his new album Shuffle.

Which to be honest, is exactly why he now commands the kind of fan devotion to let him curate a stage like this. Music fans trust him, and festivals like 2000trees, because he cares about bands as much as they do. Not just his own band.

“I was thinking the other day, I’ll remember this show and the line-up of Lenmania and Trees and ArcTanGent and be like ‘Fuck! Look at all those bands’ The key is to realise that it’s now. Grab hold and enjoy it now, don’t just wade through and realise when it’s gone. There is a scene now and I’m really excited to be part of it.”

“I feel like a little bit of a charlatan because I had my moment, my scene, that I sort of instigated and now I’ve got a second bite at the cherry being a solo artist, which I never meant to be,” Lenman laughs away as he’s asked how it feels having the responsibility of curator for not only this stage, but for the audience who followed him from Reuben who are now discovering new music through his tours.

It might be a sad unspoken truth, but the older people get the less interested in discovering new things they become. Understandably so, who has the time around life to devote to discovering new music? Like it or not, it will come down to artists like Lenman, who inspires such loyalty from his fans that will help this new wave of bands find an audience all too ready to embrace them, because of what was important to them when they were as young and passionate as this new wave of bands.

“Now I’m being welcomed into the fold by bands like Black Peaks and Haggard Cat, who are all ten years younger than me. This is their scene really, I’m more of an interloper, the fact we all fit…I don’t think I stand out too much and it’s wonderful to feel included…I hope that naughties scene was similar. But…maybe it was a little cliquey…I can’t really remember “

It’s here that Lenman‘s infectious, self-awareness and self-depreciating nature starts to show itself. When asked to reflect rather than talk about right now, it’s obvious he has a lot to say and that he thinks very hard about the best way to say it. Which isn’t to say he’s hiding anything, but it’s obvious he’s keen to make sure he’s as honest about the past as he is about how he’s feeling today.

So, it makes sense to roll deeper into the differences between the first age (if you want to call it that) and this resurgence. When it’s put to Lenman that the industry as it stands today, offering so many opportunities to bands willing to put the effort into a DIY or independent path, is actually much better placed than the weird and panic-ridden music industry circa the early oo’s…

“You might be right, we were scrabbling around for any foothold we could find, but today at least people know what their options are.” Lenman reflects.

“They still might not be great, but people know you’ve got all these outlets, and they’re very tech savvy. Which is something I’ve had to come up on very quickly being from an older generation…so I’ve had to really bone up on that quickly to keep my head above the water. Which I seem to be doing without gulping down too much chlorine. Band’s are more secure, they know what their options are and they’re more in control.

“The concept of bands working two jobs which was revolutionary when we made our film, people were shocked by that film. Well…those who saw it,” he chuckles in wry, self-aware fashion.

“Now that’s par for course, that’s an interesting contrast,” Lenman continues, with a thoughtfulness that shows he’s obviously had a lot of time reflecting on the life of his previous band and how it differs from what he sees from the bands that are now his peers.

“People accept it and everyone knows. Eva from Rolo Tomassi, we’ve not met, but I know she has an embroidery brand, as well as being a fantastic musician, and she’s one of the pioneers of that thing. People can see you can be creative in your day job and your evening job. She’s a real icon of that kinda thing.”

And how does the new environment make a scene as creatively rich as the one Lenman now finds himself in feel? The same as it did back then? After all, this recent run of shows has Lenman joined on stage by his former Reuben bandmate Guy Davis, unintentionally titillating internet loud mouths and media speculation that a reunion could be on the horizon.

“It doesn’t feel very similar. It’s a completely different world. Someone asked me how it was playing with Guy again after all these years…and I think they were a little crumpled when I told them there wasn’t really an emotional attachment. Even we when we play the songs from the band, that we sweated over, I don’t get teary or nostalgic at all.

“Guy’s not very nostalgic either, even though we both love that band and it holds a very special place in our hearts, I’m very glad to say it’s not the entirety of my career. I cherish it, but I don’t return to it often, except physically when I play the songs. Maybe if we had John…but that still wouldn’t be the band, because that band is finished!”

As obvious as Lenman’s passion for his old band is, he chats away as happily about those songs and playing them as he does his love for Black Peaks and Rolo Tomassi, it’s clear he’s keen to draw a line in the sand under the past and focus much more on the now.

“This is an important distinction to make, people think it’s Reuben when it’s me and Guy. It’s not. It’s two guys who used to be in Reuben. Reuben is finished, it was it’s own thing with it’s own energy and it burnt out, so even if we had John playing bass we wouldn’t be Reuben, it would just be three guys that were in the band playing those songs. And I think that’s why it doesn’t feel like the past when we play those songs now. Which is healthy, I think.

“I don’t get annoyed when people bring up the band, it’s still the biggest part of my career and I’m very proud of it, I do get annoyed when people ask again and again if we’re going to get back together. Because it feels like people aren’t listening, I’ve always been very, very frank with people and very clear on it for eleven years and people should know how I feel about reunion culture.”

What is more than clear, is that people are still listening to Jamie Lenman, and all the incredible bands filling up the bill at 2000trees, ArcTanGent, All Points East, and all the other festivals booking eclectic and creative line-ups full of UK bands. We all best take Lenman‘s advice and ensure we don’t miss the forest for the tress while it’s still here.

See Jamie Lenman on tour at one of the following dates: