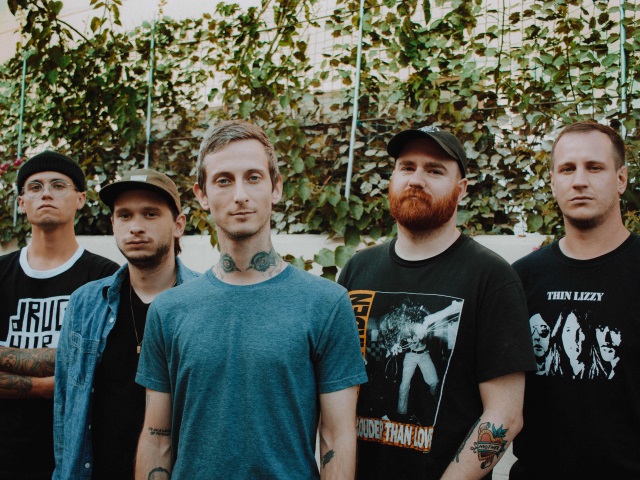 Patrick and Corey from the mighty Drug Church sat down with us shortly before their set at 2000trees. We spoke about camping, Blue Oyster Cult, Echo & the Bunnymen, metal, punk and hardcore, as well as the importance of not taking yourself too seriously.

Hi guys, thanks for meeting with us. How long have you been here in Cheltenham?

Patrick: We arrived an hour ago.

Have you played at 2000trees before?

P: No. We’ve just done a tonne of Euro festivals. This is our first ever time, not our first UK Fest, but our first time at 2000Trees.

What do you think so far? After being here for an hour…

I don’t think anyone does!

P: Okay! Somebody the other day was telling me that English people have a sick need to be uncomfortable…

P: Okay, because that makes sense, because you’re houses are all fucking cold as hell and your showers are shit. This person was saying “that’s why we go camping on vacation because nobody enjoys camping” You wake up…I wake up and there’s like that, sort of, film on your face, like when people do club drugs, like they have that film. You wake up like that in a tent and I don’t like that.

You mention club drugs, you brought up at a show in Bournemouth the other night that everyone was on ‘party drugs’.

P: Yeah, I don’t know what that is! I don’t fuck with those drugs so I don’t know how they work. Does loud, aggressive guitar even sound good when you’re on those drugs?

P: Haha! Yeah, maybe! I thought you were supposed to like, listen to house music and lick each other’s necks or some shit. Just do whatever!

So, the album came out last year, it’s really good! Lots of positive press, do you think this last album has given you more visibility? It seems like you’ve gone up another level.

P: Yeah, that’s probably true. People seem to like us now, that’s a change! I would say, yes, it’s been a big benefit to us. We’ve got mixed feelings on whether we like it when people like us. Corey likes it; I’m a little more conflicted on that. For sure, you could say it bumped us up a level. I don’t know what that level is, because I’m still poor but it’s been nice.

It’s a great album! It’s one of our favourites from last year. And we’re going to see you in a bit; it’s going to be great!

What are the bands you’re listening to at the moment, or is there anyone in particular that has had an influence on, not necessarily your playing style but on your politics, ethics that sort of thing?

P: You mean, like maybe older material? Not necessarily stuff that’s out now? Corey can talk about things he’s enjoying at the moment. I’m still listening to Blue Oyster Cult.

P: For me, I still really enjoy heavy music and I am of the orientation that metal is not actually heavy music. I think, I really prefer hardcore music. You know, Corey grew up in more of a metal household; he liked a lot of that stuff. Metal is still tough for me, it’s very hit or miss. Even bad hardcore, I’m still very open to, whereas bad metal? I would never need to listen to it again in my life. So, for me, and what I do in the band, I actually find myself – a kid came up to me after we played and he said “I love punk music but I don’t know anything about how you guys sound, this isn’t the type of punk music I know, so who’s your influence?” and I was thinking, I bummed him out so bad because I told him “I don’t know, man, I try to do like an Echo & the Bunnymen thing but I just suck,” and he was so bummed out because I think he wanted me to list punk bands who were in the same vein as us, but I’m not generally trying to do that. I’m trying to pick vocalists who I think are really, pretty good at what they do and then I just butcher it.

Not the most obvious choice, but a great one nonetheless!

C: Maybe more David Yow, I think, that’s more who you come off as.

P: Live, maybe, but recording he was still yelping and barking and I don’t do enough of that.

C: Maybe on the next record.

P: Maybe on the next record; there’s still time!

Are there plans to record anytime soon?

P: When we get off this tour the label is going to ask us when we want to record the next album. Then we’ve got to make a decision, because you’ve got to book those things in advance. So, the best case scenario is early winter, worst case scenario is late winter and we’ll find out based on everybody’s schedule.  Maybe they’ve got that saying here – “make hay when the sun is shining”? So if anybody likes us now, it seems like it would behove us to make them continue to like us. So maybe a record coming quick would be good.

Here’s the attitude – you go in, you have someone tell you “hey I just gave you all this money, don’t fuck it up” and then you go “oh man, I’d better not fuck it up,” and then a record comes out otherwise you fucked it up. So if you just apply pressure things get done.

In the last album there are a lot of odd, humorous lyrics, but also really serious topics. What were you thinking about when writing the album?

P: I had just gone through the brokest period of my life, really financially unstable and that’s very frustrating, but you gotta laugh at it because if you’re self serious about being broke you’re never not going to be broke, you know. You’ve gotta be able to laugh at the fact that this is your third day in a row of eating generic cereal, you know. Without any, sort of, milk in there.

P: Yeah, but it’s generic so it’s like Cap’n’Bark… Haha! You’ve got to be able to laugh at that shit and I think that very young people can be super sincere and super earnest and it can sound okay, but if you’re over 26 and you’re just writing straight forward surly, earnest, no self reflection that leans into being able to laugh at yourself you seem emotionally stunted to me.

You saying about not being able to laugh at yourself is a bit of a thing in punk music where people take themselves too seriously.

P: For sure, no doubt! I mean, the problem is that pop music pretends not to take itself too seriously but then is about money so it has to take itself seriously, so that’s very calculated even when it’s trying to joke. But punk music, where there’s no financial future in it, there’s no economic windfall in there, so it should be able to laugh at itself. Here’s my attitude on the thing; you should take the totality of what you’re doing and the craft of what you’re doing seriously. You should not take yourself seriously while you’re doing it. The inability to laugh at yourself makes you a total bore.

I was talking to a woman the other day that – I think this is probably an Oscar Wilde quote and I’m just not literate enough to know, but we were talking about, kind of, you know, punks jumping on each other’s backs about shit and yelling at each other all the time about differences of opinion and viewpoint and all that, and she said “look, right and wrong is just goofy bullshit, there’s interesting or tedious, that’s it. That’s all anybody really cares about; interesting or tedious.” When you become tedious, fuck man, you’ve failed as a punk band.

Sadly guys, that’s all the time we have with you…

P: We’re ending on Waitrose, why not!

So thank you both so much for sitting down with us.

P: No problem, thank you, man.

VIDEO NEWS: The Menzingers Release Video For ‘America (You’re Freaking Me Out)’ 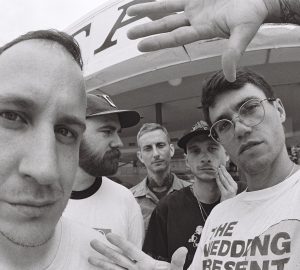