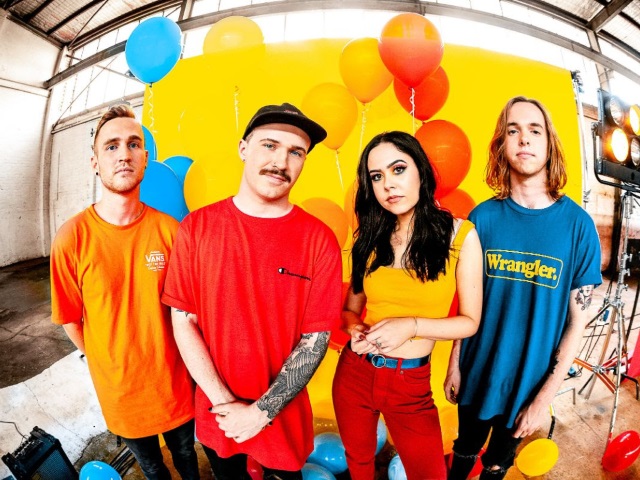 What are you listening to at the moment? The chances are, probably at least a few bands that hail from the land Down Under. Many of the young, dynamic artists making waves on the scene are from Australia right now as the country’s music scene is enjoying something of a revival on a global scale. One such band that’s had us really sitting up to take note are Sydney’s Yours Truly, and we were lucky enough to catch up with vocalist Mikaila and guitarist Lachlan at this year’s Download Festival.

We’re here at Download today with you, Yours Truly. Welcome! Who are you most excited to see? Are you going to catch any bands?

Oh no… we’re so stoked to see them. Okay, that’s a hectic day for you! So, obviously things are going really well for you guys in Australia, how do you find the crowds here in comparison to what you’re seeing in Sydney?

M: We’ve only really seen one example of it, because today’s show was our first show over here. But I wasn’t expecting anyone to actually know the words. I maybe thought there would be like one or two people who knew some of the songs, but there was like a good bunch of people that knew it. During High Hopes I sometimes let the crowd sing along a bit and I put the microphone out, but I was like “I’m not going to do it this time…” but on the last bridge I thought “I’m going to risk it…” and I was so happy that I didn’t look like an idiot!

That’s awesome. You know, a lot of people in the crowd looked like they were really into it and actually came out just to see you guys, which is always nice to see!

Lachlan: We did see a couple of Yours Truly shirts down the front, which was sick!

M: That was so cool!

L: It was weird, but it was good weird!

So, we know you said this was your first show outside of Australia, which must be mind-blowing. But have you guys travelled much before?

L: Me and Teddie have been here before just with family on vacation…

Are you related to Teddie?

L: No! No, we visited separate times!

M: Except he has the same last name as the drummer, but they’re not related. It’s spelled slightly different. But no, and I had never been here before, so this is the first time we’ve travelled this far.

Nice! So how does it compare to what you imagined?

M: You know what, I think it’s better in a way. I mean, mostly because of the fact I enjoyed our set and I enjoyed the outcome and how many people came.

Must be such a high! That was really good!

M: I didn’t expect it to be that good. But I guess the whole festival scene is kind of like at home but ten times bigger.

Yes, we love our festivals here! With flying and performing, we’ve been speaking to other artists today and they’re struggling with their voices. How are you looking after your voice?

M: We toured for maybe five weeks before we came over here – we haven’t stopped for the past six weeks. I was sick for the whole time, but I was like “I’m going to get better. I am not going over there sick.” So I was flying with a dehumidifier and I use Vocalzones, so they sent me some stuff, I’ve been pumping myself with Throateze and other throat lozenges and also trying to relax. When I’m tired, it just doesn’t go the way that I want it to.

100%. So look, what’s going on with you guys right now? You’ve just released an EP – do you want to talk to us about that?

L: We just released our second EP, Afterglow, about two months ago.

Nice. How’s the reception been to that?

L: It’s been great, it’s been great. It’s been a long time coming for us. We’ve been doing these songs for a while so to finally get it out and let people hear it is amazing.

M: I think also the fact it’s been out for two months and we got to come here and people actually knew the songs… two months isn’t really a long time to get music to another country!

Where do you guys want to be a year from now?

M: I hope we get to come back! And that we get to like, you know, see more.

You want to really get to know the scene, right?

L: I mean this trip we aren’t doing many Europe dates.

M: So we’re just doing the UK this time around.

L: So hopefully next time…

A year ago, did you ever think you would be out here?

M: No! This time a year ago, we didn’t know that we were going to be signed to a label. We didn’t know…any of this.

M: It would have been a couple of months later. Like September? This time last year was kind of like when everything started. The other day I got one of those “seven years ago on Facebook” things, and it was like…well, how old would I have been seven years ago?

So what are you guys most proud of? What’s your biggest achievement to date?

L: Yeah, just being on tour.

Even if you packed up tomorrow – not saying you will – even just to say you’ve been overseas with your band is something a lot of people can’t say.

M: We were in catering and I was like “Lachlan, take some photos, because what if we never come back?!”

Amazing! To be honest, we think you guys are going to be quite alright. Things are going really well for you guys – it’s your time! Thank you guys, we really appreciate you speaking to us today.

VIDEO NEWS: Bullet For My Valentine Release Video For ‘Piece Of Me’