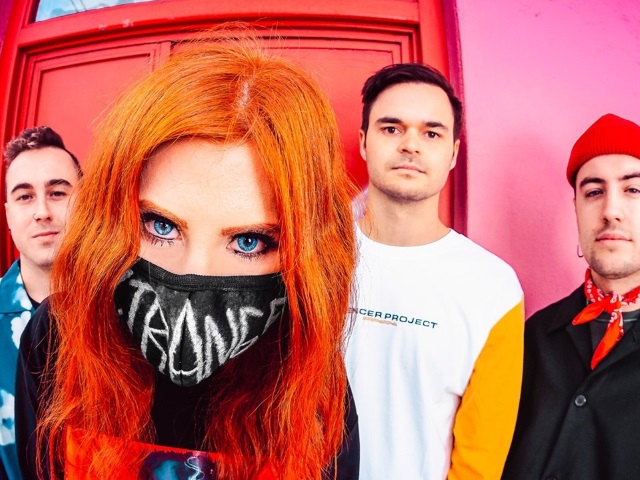 We recently caught up with rising stars RedHook at Download Festival, as part of their first EVER international tour. The Sydney-siders have catapulted onto our radar of late and we don’t see them disappearing anytime soon. We spoke to the incredible Emmy Mack, lead singer and co-founder of the band, to find out exactly what’s been running through their heads.

We’re at Download today, who’ve you seen and who are you excited to see?

Oh my god, well! Every single band I’ve seen has been amazing. nothing,nowhere. was incredible, because I kind of went into that one not really knowing much of his stuff, but was just completely blown away. Palisades were amazing. And Die Antwoord, that was an experience I’ll never forget. It’s just been such an amazing experience. I feel like there are too many amazing bands, and it’s just made it difficult to choose. It’s a lot of stress figuring out who to see!

Absolutely. Look, you guys are doing really well in Australia right now. How do you find the crowds here compared to Australia?

Do you know what, honestly? I think…it’s pretty similar! There’s not that much difference between Australia and the UK crowds-wise. If anything, I’d say the UK is probably a little bit less stand-offish to begin with. With Aussies, they can be a little bit – you know – especially when you’re the support band or if people don’t know you, they can be kind of like – arms folded, up the back, just like “what’s this band all about?” – and you really have to work hard to kind of wear them down and get them into it! Whereas it feels the reception we’ve had at all our UK shows and here at Download as well has just been incredible. The crowds are just there, they want to rock out, there’s just these good vibes and such energy. It’s just been amazing!

So this is your first time overseas. How are you looking after your voice while travelling and touring around – you mentioned on stage you’ve had a hard time with it?

It’s really hard because I love to have a drink and I love to hang out and party, but I have to behave myself and make sure I’m getting a good night’s sleep and drinking lots of water, which SUCKS when you’re at a festival like Download because I just want to be like staying up ’til 3:30am and doing all the beer bongs and…I don’t know if you guys have them over here…but yeah, it’s not very sexy or rock and roll, but I just have to make sure I’m getting enough sleep. When I start drinking and have a few too many I get really loud and obnoxious and wake up the next day with no voice, and then I can’t hit the notes that I’m supposed to hit – so yeah, I have to be good!

It is what it is! So what’s going on in the world of RedHook right now? Are you signed?

No, we’re not signed, we’re having a few really exciting discussions with a few different labels. Good question! But I guess it’s something that we’d definitely be open to, we’re just exploring options right now. We’ve got a new single, which we’re so excited about. It’s actually our favourite song to play live so to get to release the recording, I don’t think I’ve ever been more excited to release a song.

Which one is that?

Awesome, we’ll definitely check that out. So, if you had to say right now which three causes you care about most in the world, what would they be?

Three causes! It’s really hard to sort of prioritise. The world’s a really fucked place and there’s a lot of things that aren’t right in the world, so I guess to choose three causes is really difficult. Man, that’s really hard! You threw this one at me! I can’t really say, there’s so many things I care about. Obviously climate change is a big one, because it’s going to fuck all of us, so we need to do something about that. Man… just, closer to home just corruption and greed.

There’s a lot of that.

Exactly, especially in the first world there’s so much of it. I guess if I had to pick one cause that’s most important to me, I think mental health. I don’t know what the statistics are like in the UK, but in Australia suicide is one of the biggest causes of death and it’s insane, it’s crazy, to think that many people are dying. They’re dying needlessly, and from something so preventable.

And I mean, there’s been a lot of progress made with de-stigmatising depression and anxiety and all of those issues that people face in the mental health umbrella, but at the same time, so much more needs to be done and it gets swept under the rug. It needs to not be. We need to be talking about it openly. I guess with RedHook one of the biggest things that we aim to do with our music is address it. For Craig and myself, we started the band, music has always been such a form of therapy. We both have struggled so much with our own mental health issues and music has always been our medicine. It’s kind of what brought us together and helped us create RedHook. One thing that we hope to achieve with our music is to help people – like us – who are feeling isolated and like outcasts, or feeling low or like their life doesn’t mean anything, to feel less alone and to feel like yes, your life does mean something, and there’s a way to process that pain in a healthy way. It’s temporary. It doesn’t last.

This got really deep, but that was so important. If you look into the future at where you want to be, where do you picture RedHook?

Oh my god! We’d love to come back to the UK. We’d love to play Download Festival again! Hopefully a little higher up the bill, just climb up that ladder a little bit! But it’s been so great, it’s been such an amazing experience. We just want to keep doing what we’re doing, keep playing these music festivals, keep touring… hopefully release an album! But yeah, we don’t want to stop. Let’s keep the train rolling!

Nice! What are you most proud of as RedHook?

Ooh, what are we most proud of? The fact that I’m here, talking to you right now. I think it’s insane. The one thing that people keep asking is like “you guys have only released three singles and you’re over in the UK playing Download?” It feels insane, it feels completely insane. So yeah, I guess to have achieved that in such a small space of time has been really humbling and we are so, so grateful.

Congrats, RedHook and thanks so much, Emmy!

RedHook’s latest single Only Bones is out now, available to stream HERE.

If you’ve been affected by any of the issues raised in this interview and you need some support, you can contact the following resources for help: