Redhook kick us off on the final day at Download and as it happens, it’s their second show of the weekend, following the Aussies’ Saturday lunchtime acoustic set for Carlsberg. Today, they ramp things right up on a nearly astronomical scale to a tent that’s absolutely packed for 11 in the morning. With gratitude that absolutely beams off their faces, they begin a multi-track onslaught which takes us through a rollercoaster of genres from nu-metal to rap and back to rock. This band, formed by Emmy Mack and Craig Wilkinson, have had an absolute whirlwind of a career in a short space of time and from the crowd, it’s instantly easy to see why. This is the Sydney band’s first ever Download Festival, but we dare say it won’t be their last. 9/10 CLS

Nope, that’s not an American twang we’re hearing from Dinosaur Pile-Up, but you’d be mistaken for thinking so – this Yorkshire outfit sure do have a drawl! The grunge-rock guys have grown from strength to strength in recent years, proving that there’s a lot to be said for not throwing in the towel (which was, at one point, on the table). Vigorous, assertive and more than a little triumphant to have such a lively crowd on a Sunday morning; if you missed it, you missed out. 7/10 CLS

It’s been 14 years since Underoath last appeared at Download and much has changed in that time. Since 2005, the band released three more records before going on hiatus in 2013, then reappeared last year with comeback record Erase Me. The new material has proved divisive with fans, as their heavy post-hardcore sound has been replaced with a subdued, alt-rock style. The set is dominated by this more recent material, and while tracks like ihateit and Rapture have opened a path to daytime radio, their middle-of-the-road sound is easily washed out on a stage as large as this, leaving the majority of the set lacking in impact. Old favourites It’s Dangerous Business Walking Out Your Front Door, Breathing In A New Mentality and Writing On The Walls get a much better reception and carry a bigger punch, but these moments are too few and far between to save this from being a sadly forgettable set. 6/10 MJ

We have to check our watches as we hit the Avalanche Stage next, as the size of the crowd waiting to see Black Peaks is usually reserved for headliners alone. Many, including us, have cited the Brighton-based quartet as one of the best live bands this country has to offer, and it looks like the word is getting out. Led by the superhuman vocal abilities of Will Gardner, the band progress through tracks from their most recent album All That Divides as well as favourites Glass Built Castles and Say You Will from debut record Statues. Gardner switches effortlessly from long, guttural screams to soaring melodies and can’t help but hide his delight at the addition of pyrotechnics jetting out from the front of the stage to accentuate the heavier parts of the band’s set. Drummer Liam Kearley hits so hard he’s in danger of bludgeoning his way through the drum platform, and amongst all this power is a mesmerising level of skill that continuously draws the eye. There’s a steady stream of influence on All That Divides from tonight’s headliners Tool, not least on sublime track The Midnight Sun, making this a fitting prelude to what’s in store this evening. If Black Peaks continue to perform this flawlessly and effortlessly for years to come, no-one would begrudge them an opportunity to follow in Tool’s footsteps as a future festival headliner. 10/10 MJ

Fever 333 played their first ever UK show on the Avalanche Stage last year to a huge reception and this year they return to an even bigger congregation. Like a modern-day Rage Against the Machine, Fever 333 deliver a dual-pronged attack of catchy, groove orientated rock songs, with a strong political message that bemoans the prevalence of gun crime and a power-driven patriarchy. While their message is just as, if not more, important than it was last year, musically this performance fails to live up to last year’s unforgettable debut. With no live bass player on stage, the bass is piped through the speakers from a backing track which is overbearingly loud, drowning out Stephen Harrison’s guitar work and the usually spellbinding drum work of Aric Improta. This upsets the balance of Harrison and Improta’s tightly controlled grooves, which provided the head-bobbing inspiration for 2018’s fantastic set, reducing the musical side of the performance to a wave of rumbling noise. Though Jason Butler’s vocals are too low in the mix to be effective too, his ever-energetic stage presence is enough to distract attention, and rescues the set. Like a kid hopped up on sugar, Butler charges around on stage, and regularly off it, stirring the crowd into a frenzy and with so many packed into the tent to witness the madness, they happily go along with the programme. 6/10 MJ

Short but sweet doesn’t quite cut it for a band of The Amity Afflication‘s calibre; sure, they’re time-limited and sure, they put on a good show, but we’re not quite sure that “sweet” is the word for it. The Australian metalcore musicians are as loud as they come at the best of times but today they’re really packing the punches. A solid set! 7/10 CLS

For such a genuine and authentic band, Enter Shikari sure know how to put on an outstanding theatrical performance. Complete with light shows and confetti cannons galore, the St Alban’s outfit go out of their way to close out the Avalanche Stage for the weekend with a bang. Storming through their repertoire with a set that’s both inclusive and entirely for their fans, there’s not a single foot both inside and outside the tent that isn’t stomping along by the end. The crowd isn’t exactly subdued, and at one point, two of the wilder members are told to stop their entirely ridiculous climbing antics and get the hell OFF the riggings. It’s a command that’s met with several boos before of course, the show goes on. Remixes, politics and absolute classics are all part of the parcel now for Shikari, and we love it each and every time. Having seen this band many time over the years, we know by now that the four-piece never fail to deliver – but that somehow, we always manage to stay surprised. 10/10 CLS

As the weekend draws to a close, anticipation builds at the front of the Main Stage for festival headliners Tool. They last headlined here in 2006, the same year they released previous record 10,000 Days, leading many to speculate that such an opportunity may never arise again. As the enigmatic quartet, led by the mohawk sporting, mascara clad form of Maynard James Keenan burst into opener Ænima, they look and sound like a revitalised band. Keenan writhes around on his podium showing remarkable flexibility, while bassist Justin Chancellor and guitarist Adam Jones jam beside one another head-banging to their riffs; for a traditionally stoic group of musicians, this is one of their most animated performances and it’s fantastic to see the band back on stage enjoying themselves. The set list is a real crowd pleaser, with hits like Schism and Parabola satisfying the casual onlooker, while deep archive material like Intolerance and Part of Me delights the hardcore fan base. Previews of two new tracks – the brooding, progressive Descending and the more punchy, aggressive Invincible – also make it on the list and fit snuggly alongside the rest of their material, as though both take influence from the band’s entire back catalogue. Tool have always existed as something of an enigma, famously staying out of the media spotlight and letting their music speak for them, and tonight is no different. While some will justifiably question the choice of displaying Adam Jones’ wonderfully eclectic artwork on the giant screens rather than close-ups of the band members, and bemoan the lack of audience interaction by Keenan (who spoke only twice during the set), there can be no questioning the band’s supreme attention to detail with their musical performance. We can’t recall a band sounding this good on an outdoor festival stage before; every note of every instrument is so clear, precise, yet relentlessly powerful, that even the die-hard fans who’ve seen the band multiple times before can’t quite believe what they’re hearing. Every hit of Danny Carey’s bass drum is like a machine gun hit to the chest, while Chancellor’s immaculate bass tone rattles the spine. To return to the stage after a prolonged absence and produce a performance like this is truly remarkable and with a new album finally making its way to us on August 31st, Tool are back in the spotlight, whether they want the attention or not. 10/10 MJ 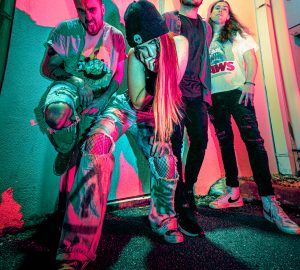